ATLANTA - Many across the U.S. on Monday are honoring the life and legacy of Dr. Martin Luther King Jr. through marches, tributes, volunteering and a call to action on voting rights.

The Martin Luther King Jr. holiday is observed each year on the third Monday in January. King, who would have turned 93 on Jan. 15, was a pastor and civil rights leader who dedicated his life to achieving racial equality — a goal he said was inseparable from alleviating poverty and stopping war.

King helped organize rallies and boycotts, including the successful Montgomery bus boycott, and advocated for peaceful protests. King delivered his iconic "I Have a Dream" speech in 1963 from the steps of the Lincoln Memorial in Washington D.C. and was awarded the Nobel Peace Prize in 1964.

King is remembered for his important contributions to the civil rights movement in America.

Today, Martin Luther King Jr. Day is the only federal holiday designated as a day of service to encourage all Americans to volunteer and improve their communities, according to the National Museum of African American History and Culture. In observance of the national holiday, schools, government agencies, businesses and banks are closed.

King’s example and his insistence on nonviolent protest continue to influence many activists pushing for civil rights and social change today. Here are various events being held on Monday across the U.S. in honor of the late civil rights hero.

MLK Day 2022 marches and tributes across the U.S.

First lady Dr. Jill Biden was also in attendance for the ceremonies.

In Washington, D.C., some of King’s family led a march for peace through the nation's capital in remembrance of the slain civil rights leader. The march headed toward the Frederick Douglass Memorial Bridge where attendees were joined by D.C. Mayor Muriel Bowser and other civil rights activists. U.S. House Speaker Nancy Pelosi, D-Calif., also spoke with King’s family, calling for the "critical need for action on voting rights."

In Tampa, the MLK Day parade made a return after being put on hold last year amid the COVID-19 pandemic. WWE star Titus O’Neil is serving as the grand marshall of the parade hosting all different types of floats. In nearby St. Petersburg, celebrations began over the weekend and culminated with a parade to also celebrate King.

In Los Angeles, the premier annual event to mark Martin Luther King Jr. Day — the Kingdom Day Parade in South L.A. — was been canceled due to the surge of COVID-19 cases. But a number of other MLK-related events are still scheduled for Monday, including a free, COVID rapid testing event being held by the Congress of Racial Equality (CORE-CA) Kingdom Day Parade Committee.

The Harriet Tubman Center for Social Justice and other groups hosted an MLK Day "Caravan for Social Justice," to "reflect the true spirit of Dr. King" at the intersection of Western Avenue and MLK Boulevard. The city of Carson will also present its annual tribute to King with a celebration in the evening featuring songs, dance and inspirational words.

The NBA will also celebrate Martin Luther King Jr. Day with games and celebrations commemorating his life and legacy. Twelve games are scheduled for Monday including the traditional home games in King’s birthplace of Atlanta and in Memphis.

NBA teams have been paying tribute to King in many ways in recent days. Players have been warming up in shirts bearing the message "Now is the time to make justice a reality for all," a nod to a line he used in his famous "I Have A Dream" speech.

President Joe Biden on Monday shared a video address that called on Americans to commit to the "unfinished work" of King, delivering jobs and justice and protecting "the sacred right to vote, a right from which all other rights flow."

Martin Luther King Day is a moment when a mirror is held up to America, the president said.

King dedicated his life to securing civil rights for Black Americans. His work in securing passage of the Voting Rights Act of 1965 remains one of his greatest accomplishments. But his children fear new voting laws are stripping away the very voting rights their father fought to attain.

Nineteen states enacted more than 30 new voting laws in the name of election security following the 2020 presidential election, which included debunked claims of widespread fraud by former President Donald Trump. Critics have said those laws will disproportionally affect Black voters. They include a ban on giving water to voters in long lines and stricter ballot signature requirements.

King's eldest son criticized Biden and Congress as a whole on Monday for failing to pass voting rights legislation.

"You were successful with infrastructure, which is a great thing -- but we need you to use that same energy to ensure that all Americans have the same unencumbered right to vote," Martin Luther King III said.

Senate Republicans remain unified in opposition to the Democrats’ voting bills. Biden described their stonewalling as part of "a true attack on our democracy, from the Jan. 6 insurrection to the onslaught of Republican anti-voting laws in a number of states."

MLK Day volunteer opportunities 2022 near you

In his memory, Martin Luther King Jr. Day is the only federal holiday designated as a national day of service in which Americans are encouraged to step up to make our communities more equitable.

The annual event is an opportunity for Americans to answer the call famously posed by King, "Life’s most persistent and urgent question is, ‘What are you doing for others?’" 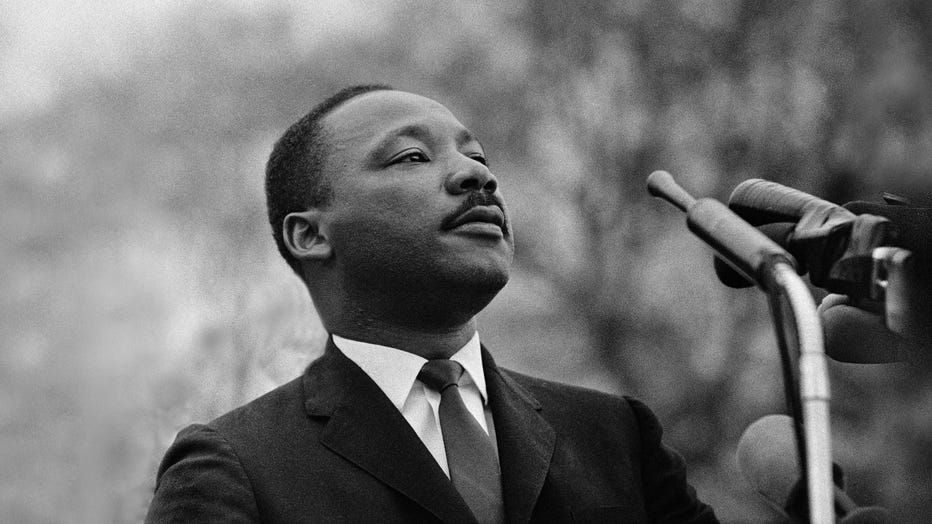 There are many local MLK Day service project opportunities that can be found by zip code on the AmeriCorps website, the federal agency which leads the MLK Day of Service and the nation’s volunteer efforts.

Though King lost his life in April 1968, it would be 15 years before Dr. Martin Luther King, Jr. Day would be declared a federal holiday in the U.S. — and another three years before it would be observed.

Starting in 1968, the year King was assassinated and less than five years after his famous "I Have a Dream" speech, Rep. John Conyers, D-Mich., introduced legislation for a federal holiday to commemorate King. Conyers went on to reintroduce the legislation in every session from 1968 to 1983.

President Ronald Reagan finally signed the holiday into law in 1983, with observance on the third Monday of January each year. The holiday was first observed in 1986.

Before the day was officially recognized on the federal level, some U.S. states recognized holidays in honor of King. Connecticut did so in 1973. Illinois adopted a commemoration day in 1969 and also made it a paid holiday in 1973. Other states resisted observing the holiday as such, giving it alternative names or combining it with other holidays, according to FOX 5 Atlanta.

It was officially observed in all 50 states for the first time in 2000.

This story was reported from Cincinnati. FOX 5 Atlanta and the Associated Press contributed.