Vishnu Sridhar is the lead systems engineer for Perseverance's SuperCam. He grew up in Rego Park, Queens, and attended Aviation High School in Sunnyside.

NEW YORK - A howitzer fired a 150-pound parachute attached to NASA's Perseverance rover into the atmosphere of Mars, on Thursday Earth time, while the SUV-sized rover suspended beneath the 'chute hurtled toward the surface of the Red Planet at nearly twice the speed of sound.

"Space is definitely very harsh," Perseverance SuperCam lead systems engineer Vishnu Sridharan said. "We try to simulate everything on Earth and we do our best but when it comes to the real deal there is an element of chance there."

Sridharan grew up in Rego Park, Queens, but on Thursday he sat in his Pasadena apartment while working remotely and watching a livestream of Perseverance's entry, descent, and landing on Mars, hoping the product of the last three years of his working life survived unscathed.

"Folks have been working on it for over a decade," Sridharan said of SuperCam. 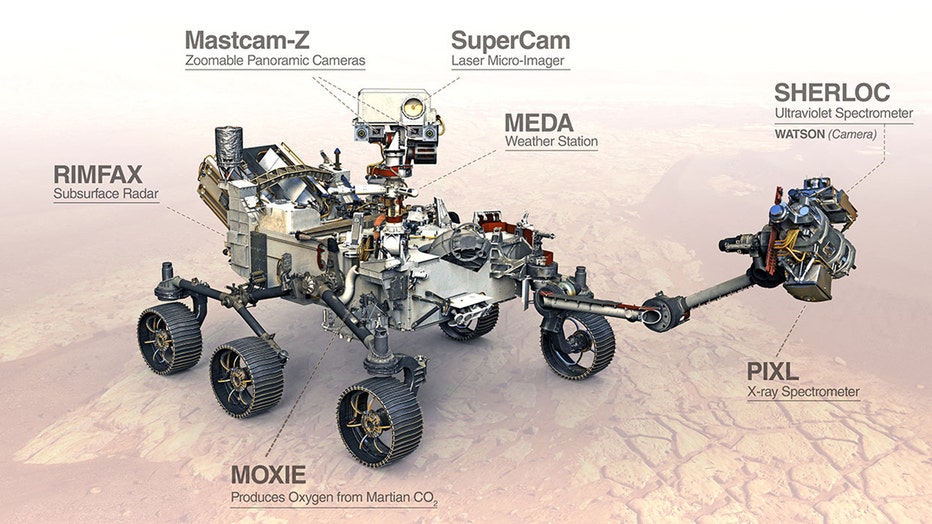 An illustration of NASA's Perseverance Rover with labels indicating the major instruments. (Via NASA/JPL)

Perseverance landed safely in the 28-mile wide crater of a former Martian lake, to applause from those in mission control back on Earth, and now spends the next few weeks ensuring all its various subsystems still function after six months of space flight and seven terrifying minutes of entry, descent, and landing.

"So, what we'll be doing is firing lasers on rocks, taking images, recording with our microphone," Sridharan said.

Sridharan's SuperCam plays a vital role in Perseverance's mission to collect the first Martian samples for return to earth (a task to be assigned to a future mission).

"Basically used to study the elemental composition of rocks," Sridharan said, "but also it's used for detecting biosignature of targets it's looking at."

Those biosignatures might hint at whether the surface of Mars ever harbored life.

"We're not like thinking about little green men or aliens on Mars," Sridharan said, "but more like microbial life."

While Sridharan's grandfather was a civil engineer in India, Sridharan also credits Aviation High School in Sunnyside with guiding him to his current role at NASA's Jet Propulsion Laboratory.

"Really sparking my interest in pursuing outside-the-atmosphere engineering," he said.

Once Sridharan determines SuperCam functions as it should, the engineering part of the mission ends, the science begins, and Sridharan starts working on a system for a future NASA mission, one he hopes also studies conditions and demonstrates technology that improves life here on Earth.

"As humans," he said, "we are explorers and naturally we go and seek and ask fundamental questions."