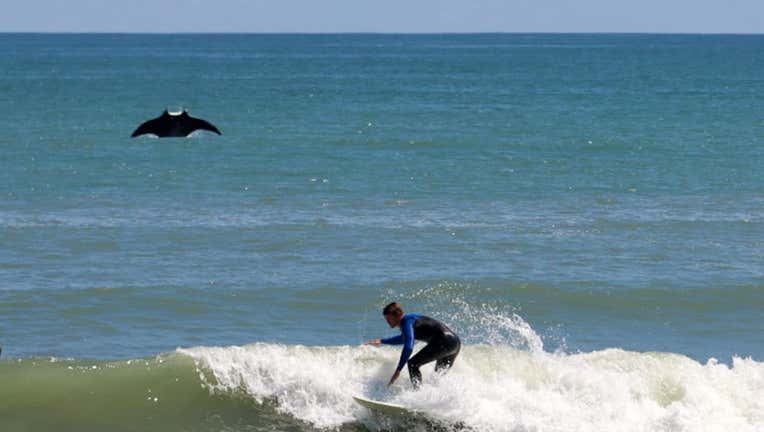 SATELLITE BEACH, Fla. - A Florida photographer captured the stunning moment when a massive manta ray jumped out of the water and ended up photobombing a surfer!

Rusty Escandell was at Satellite Beach on Sunday with family and friends photographing his son surfing when he accidentally got the incredible leap on camera.

"Saw the splash behind the surfer I was photographing using burst mode catching several frames in a row, but didn’t realize it was a manta ray until I got home and was reviewing the picture!" he told FOX 35 News.

Escandell estimated it to be at least 8-feet long "but probably bigger."

He posted the photo on Facebook and it was shared to the Satellite Beach Facebook page where it got over 1,000 ‘likes’ and dozens of comments from impressed viewers.

"That’s the shot of the century there!" wrote one commenter.

Another said, "One in a million chances of catching this photo!"

Escandell is pleased that his photo was a happy accident because "it seems like many are enjoying it and that makes it all worthwhile."

Watch FOX 35 News for the latest Central Florida stories and get viral stories of the day sent to your email with the FOX 35 Newsletter.