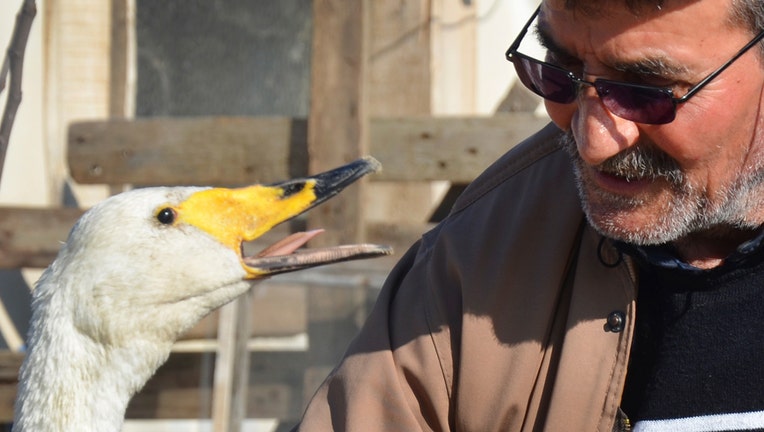 Recep Mirzan, a 63-year-old retired postman talks to Garip, a female swan that he rescued 37 years ago. (AP Photo/Ergin Yildiz)

EDIRNE, Turkey - An unusual friendship between a Turkish man and a swan he rescued has endured for decades.

Mirzan and a group of friends were taking a shortcut in their car when they noticed the swan, with a broken wing, in an empty field. Mirzan immediately took the swan in to protect her from predators and kept her in the car until that afternoon, when he was able to take the swan to his home.

Since then, Garip has lived on the man’s farm in the Karaagac region, bordering Greece.

Garip follows Mirzan whenever she is out of her pen, accompanying him when he is doing his chores around the farm or for his evening walks.

"Since I love animals, I said to myself that I should take her home instead of leaving her as prey to foxes," Mirzan told The Associated Press, recounting the day he took Garip in. "We got used to each other. We never separated."

Mirzan named the swan "Garip," which translates as "bizarre" but is also used to describe those who are down on their luck.

After Garip’s broken wing healed, the swan stayed with Mirzan and also befriended the cats and dogs in the area.

Garip spends most of her time out of her pen and has never tried to run away from Mirzan’s farmstead.

A widower with no children, the 63-year-old Mirzan says Garip has been loyal to him and chose to stay at his side. Mirzan considers the swan his child.

Living with Mirzan has obviously been beneficial for Garip. According to the U.K.-based Swan Sanctuary, the average lifespan for a swan in the wild is 12 years. It says that, in protected environments, they can live up to 30 years.