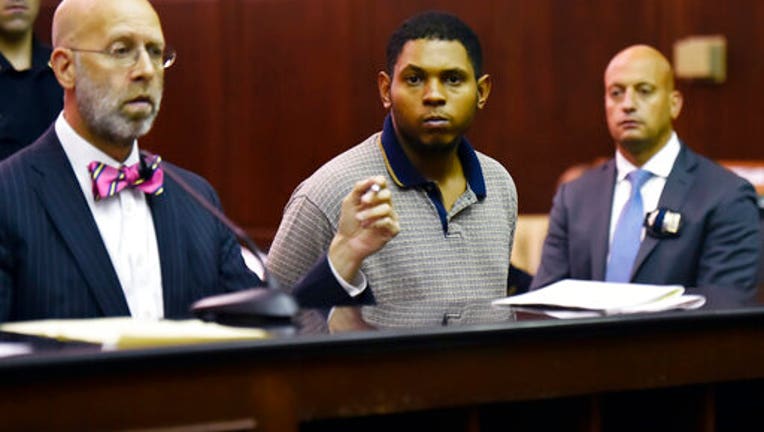 NEW YORK (AP) — A homeless man charged in the beating deaths of four men as they slept on the New York City streets may pursue a mental health-related defense, his lawyer told a judge Monday at his arraignment.

Randy Santos, 24, pleaded not guilty to murder and other charges during a brief excursion to court from the psychiatric ward, where he has been held since shortly after his arrest in the Oct. 5 killings in Manhattan's Chinatown neighborhood.

Santos appeared in an orange jail suit and gray undershirt with his hands cuffed behind his back and a Spanish interpreter by his side. He has already told police that he committed the killings, prosecutors said.

Officers responding to a 911 call about the Oct. 5 attack found Santos carrying a metal pipe covered with blood and hair near Mulberry Street and Canal Street, police said.

The dead ranged in age from 39 to 83, and three of them were part of a New York City homeless population that includes over 60,000 people in shelters and likely thousands more on streets, subways and other public spots.

Residents would warmly greet the oldest, Chuen Kok, as "uncle" and often saw Anthony Manson, 49, with his laptop computer, writing a blog that touched on scripture, psychology, charity and making homelessness "more visible to everyone who see, but don't really see." It took authorities nearly two weeks to identify the third homeless man, Florencio Moran, 39.

The other of the four, Nazario Vásquez Villegas, had a home on Staten Island but may have fallen asleep while visiting his friends on the streets. He "was in the wrong place and at the wrong time," his daughter Guadelupe said.

Assistant District Attorney Alfred Peterson said Santos told police it was him in security video showing a man walking with the weapon in the area where the killings happened. Another detective recognized him as the suspect in the earlier assault, Peterson said.

Santos is being held without bail and was due to be returned to the prison ward at Bellevue Hospital after his court appearance.

He also faces an attempted murder charge for the beating of a man who survived the Oct. 5 attack and an assault charge for a non-fatal beating about a week earlier in midtown Manhattan.

In that case, prosecutors said, Santos beat a man who was sleeping on a bench before attempting to pick him and throw him in the Hudson River.

He has at least six prior arrests, including two last year. He is accused of punching a stranger on a subway train and choking another man at an employment agency, police said. He was arrested in May after allegedly punching a homeless man inside a Brooklyn shelter.

His mother, Fioraliza Rodriguez, 55, told the New York Daily News she had kicked him out of her home about three years ago after he assaulted her. She said she was afraid of him, but "never thought he would kill someone."