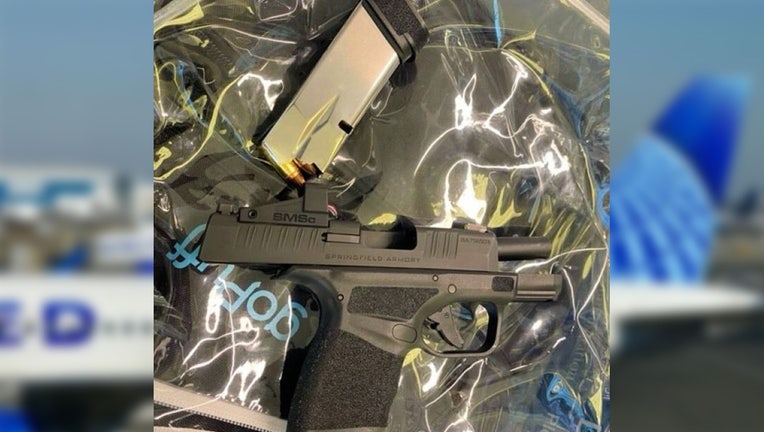 The TSA caught its 14th gun at an airport checkpoint at Newark Liberty Airport on Thanksgiving, tying the record for most guns caught at the airport in a single year.

NEW JERSEY - A Pennsylvania man has been arrested after Transportation Security Administration officers found a loaded 9 mm handgun in his carry-on bag at Newark Liberty International Airport on Thanksgiving.

The man is the third person this month to be caught with a gun at Newark Airport and is the 14th person caught this year, tying the record for most guns caught at the airport in a single year with a full month remaining in 2022.

RELATED: Bomb threat made against flight into Newark; person in custody

"Getting caught with and arrested for carrying a loaded gun at our airport means this individual had a pretty bad Thanksgiving," said Thomas Carter, TSA Federal Security Director for New Jersey. "Not only was this man arrested, but he also now faces a stiff federal financial civil penalty that could run into thousands of dollars."

The owner of the gun is a resident of Newtown Square in Pennsylvania's Delaware County, near Philadelphia.

According to officials, the gun was loaded with 13 bullets, including one in the chamber.

Firearms are not permitted to be carried through airport security checkpoints. Bringing a gun to an airport checkpoint carries a federal civil penalty, which can stretch into thousands of dollars, depending on mitigating circumstances.

For more information on how to travel with guns, the TSA has details posted on its website.

The TSA last caught 14 guns at Newark Liberty Airport in 2018.