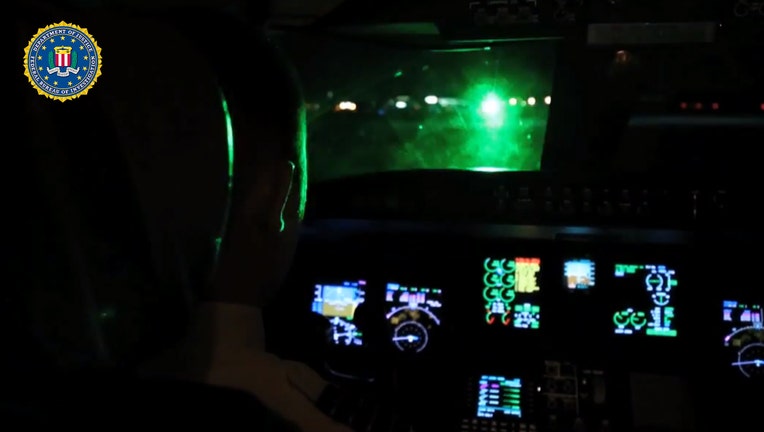 FILE -An FBI simulation of a green laser pointed into a cockpit of a commercial aircraft. (FBI)

NEW YORK - A Brooklyn man faces several charges after he pointed a laser at an NYPD helicopter and a news helicopter during protests in Brooklyn, said police.

James Dowling, 42, of 442 Columbia Street was seen pointing the laser from the rooftop of his building at the Red Hook Houses Tuesday at about 9:45 p.m. Cops took him into custody on the rooftop.

Pointing a laser at an aircraft could distract or even blind a pilot.

There were no reported injuries to the aviation police or those in the news helicopter, added the NYPD.

Dowling faces charges of reckless endangerment, directing a laser at an aircraft, and criminal trespassing.

The NYPD has reported laser-pointing incidents in the past. In June, a man wearing a gas mask stood behind a tree in Lower Manhattan and pointed a red laser beam at an NYPD helicopter.