Six astronauts from multiple countries are living in Mars-like conditions in Israel’s Negev desert as part of a three-week run of experiments. Credit - Austrian Space Forum via Storyful

Six astronauts from various European countries are attempting to better understand what it’s like to live on Mars through a simulated experience in the Israeli desert.

The mission, being operated by the Austrian Space Forum (OeWF), involves six "analog astronauts" specially trained to live at a pretend Martian base in the Negev desert. They will live in isolation for three weeks in a period ending on Oct. 31, conducting research for future missions on the Red Planet.

The six astronauts are from Austria, Germany, Israel, Spain, Portugal and the Netherlands. They’ll do more than 25 experiments, including research on the mental and physical health of astronauts, test special rovers, drones and more.

"The analog astronauts will live and work in a habitat specially developed for the mission," the OeWF said. "During activities outside the habitat, they will wear an elaborate spacesuit prototype, which was developed and built by the OeWF."

"With our analog research, we test equipment and procedures and look for weak points so that everything may go smoothly in actual use," said Dr. Gernot Grömer, director of the OeWF. 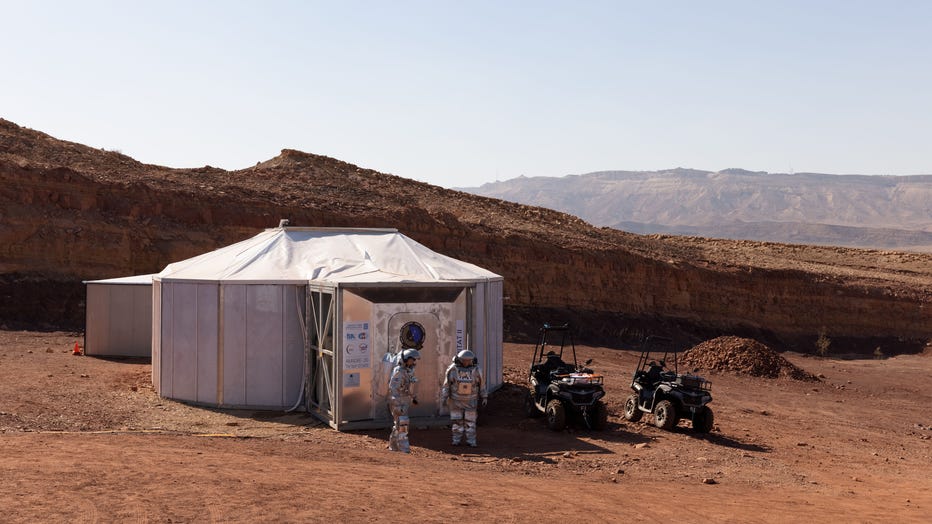 Communication between the crew in Israel and the mission support center, located in Innsbruck, Austria, has a built-in 10-minute delay, Grömer said. A small on-site support team will be available for technical problems and maintenance but will not be allowed to interact with the astronauts.

To prepare for eventually sending astronauts to Mars, other space agencies have conducted or plant to conduct similar experiments.

In August, NASA began taking applications for four people to live in a 1,700-square-foot Martian habitat — inside a building at Johnson Space Center in Houston — for an entire year. The paid volunteers will work a simulated Martian exploration mission complete with spacewalks, limited communications back home, restricted food and resources and equipment failures.

Participants must hold a master’s degree in a science, engineering or math field or have pilot experience. They must also be an American citizen or permanent U.S. resident, between the ages of 30 and 55, in good physical health with no dietary issues and not prone to motion sickness.

The U.S. space agency is planning three of these experiments with the first one starting in the fall of 2022.