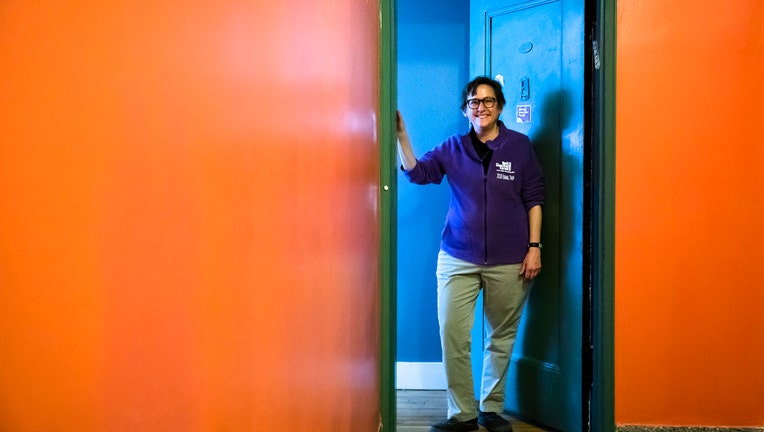 Rabbi Sharon Kleinbaum at the door to her apartment in New York, Monday, April 6, 2020. (AP/Matt Rourke)

NEW YORK (AP) - Sharon Kleinbaum was installed in 1992 as rabbi of Congregation Beit Simchat Torah in Manhattan, considered the largest LGBT synagogue in the nation. At the time, AIDS was killing thousands of gay New Yorkers each year.

"The CBST community knows what it takes to live through a plague," Kleinbaum says in a message posted on the synagogue's website after New York became an epicenter of COVID-19.

Yet the coronavirus pandemic poses challenges that weren't present during the AIDS crisis — notably that she's fulfilling virtually all her duties without face-to-face contact. She mostly works from her apartment in far-northern Manhattan, where she lives with her wife and dogs, 10 miles from the synagogue.

That I cannot be with people physically is very hard," Kleinbaum said.

During the AIDS crisis, she recalled, there were no such worries.

One key challenge these days is technology, given the congregation's reliance on digital communications.

"I'm not fluent with tech on the best of days," Kleinbaum says. "I need to be more fluent very quickly."

Yet she's grateful for the ability to lead services online.

"I was shocked about how spiritually deep it felt," she says. "I was prepared for it to be an alienating experience, and it wasn't."

Late Monday morning, she convened an online meeting with 14 staff members. Three have endured bouts with COVID-19; one lost a parent to the virus, another has a spouse who is battling it.

By phone, Kleinbaum spoke to a woman in the congregation who was traveling to a cemetery to bury her mother — under state orders, only 10 people were allowed at the funeral.

"I let her know that she's not alone, that people in the congregation are thinking about her," Kleinbaum said.

She also spoke to a congregant whose spouse, in hospice care at their home, is close to dying.

"It's made worse because I can't visit them," she said.

Despite such difficulties, Kleinbaum is grateful — just to be there.

"I feel like God wants me to be alive right now," she says. "Maybe for this you were born."