Meet the LEGO astronauts aboard Artemis I

No small steps here: NASA managers explain how they're using Artemis missions to inspire the next generation of scientists and engineers.

CAPE CANAVERAL, Fla. - Call it one small step for tiny astronauts. There may not be a human crew aboard NASA’s Artemis I mission, but there will be four small LEGO astronauts keeping an eye on the Orion capsule’s flight to the moon.

The minifigs, as they’re known to LEGO fans, include two characters from a LEGO Education program meant to help teachers engage students in math, science, and engineering-related subjects. ‘Build to Launch’ is a NASA-LEGO partnership billed as a 10-part "interactive digital learning adventure" in conjunction with the Artemis mission.

The program’s free online videos and curriculum help students explore STEAM careers through the lens of the mission. Students are introduced to human members of NASA’s Artemis team, as well as the ‘LEGO Space Team,’ of which minifigs Kate and Kyle are a part.

"By having familiar LEGO minifigures Kate, Kyle, Julia and Sebastian onboard the Orion spacecraft, it is our hope students will become excited about the possibility of a career in space exploration and inspire them to continue their STEAM learning journey," explained Dr. Jenny Nash, head of education impact in the U.S. for LEGO Education. 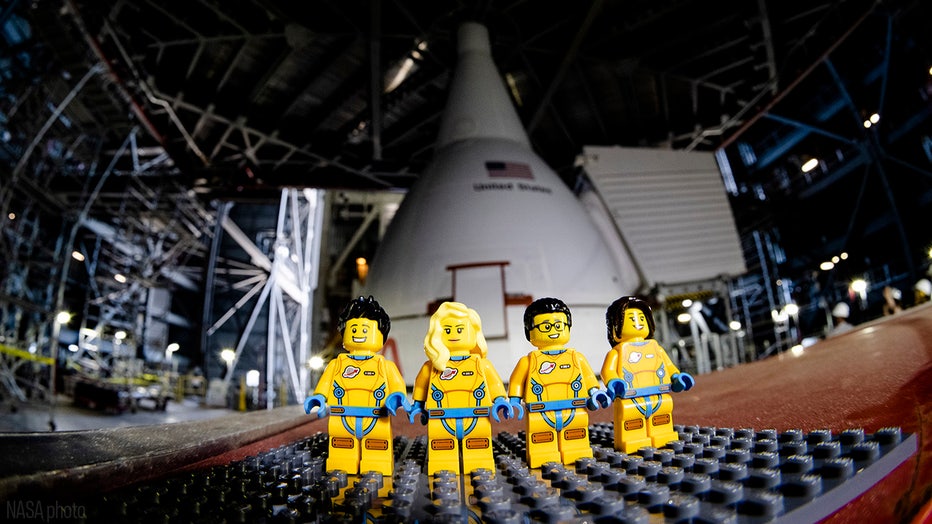 Kyle, Julia, Sebastian, and Kate are flying aboard the Orion capsule for Artemis I.(NASA photo)

"Our mission really is to explore the secrets of the universe for the benefit of all," agreed Maureen O’Brien, NASA’s manager for strategic alliances for the Office of Communication. "We think partnerships like this one really help kids feel connected to this mission so kids have an opportunity to get engaged in real-life missions through a hands-on and tangible way."

NASA astronauts, of course, undergo a rigorous selection process. Agency experts say a similar amount of thought and consideration went into the decision to send the minifig counterparts into space.

"I think what was really unique about LEGO’s approach when they made the proposal to us was it wasn’t just about trying to fly these figurines in space as much as it was about creating this comprehensive educational experience that really got kids into engineering and science and the connection between the two," offered Rob LaSalvia, NASA’s manager for STEM partnerships for the Office of STEM Engagement.

RELATED: These recycled space shuttle parts are now powering Artemis I to space 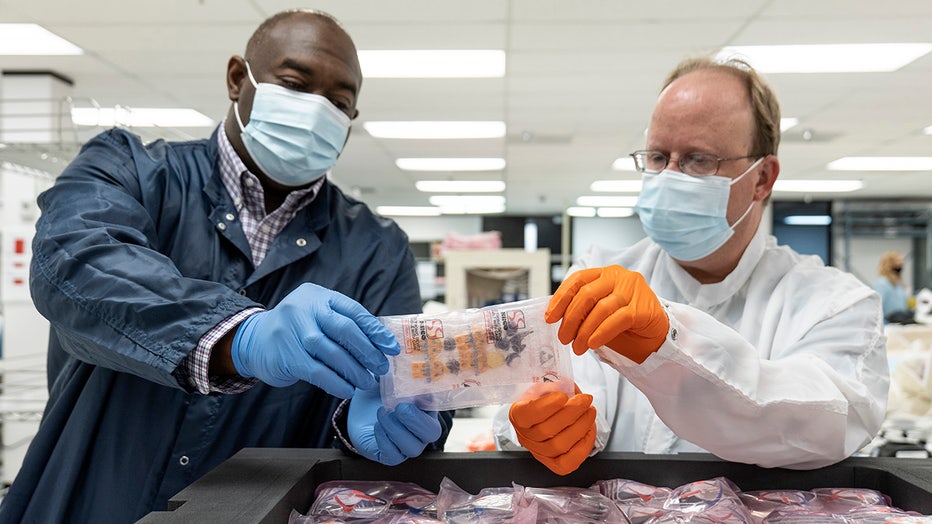 NASA personnel holding LEGO minifigures while performing a fit check at NASA’s Johnson Space Center for items to fly on Artemis I as part of the official flight kit, which carries mementos for educational outreach and posterity. (NASA photo)

The Artemis I mission is now scheduled to blast off as soon as November 16, the first launch of NASA’s powerful new Space Launch System rocket. During the 39-day mission, the new Orion spacecraft will head to distant lunar orbit before rocketing back to Earth and reentering the atmosphere at 25,000 mph in a blazing test of its heat shield.

"It wasn’t just about trying to fly these figurines in space as much as it was about creating this comprehensive educational experience."

If all goes well, NASA hopes Artemis II will carry a human crew on a similar mission, with Artemis III landing astronauts – including the first woman and first person of color – on the lunar surface.

"Several decades ago when we launched Apollo, it inspired a whole generation of scientists and engineers. Interestingly, a subset of those folks are actually leading key components of the Artemis mission now," LaSalvia continued. "So now when we think about how science, technology, engineering, and math careers are more important than ever to our economy, we really hope that this Artemis series of missions really serve as a catalyst to spark student curiosity and to get them thinking about how they can see themselves in future careers – be it at NASA or a university or other segments of the STEM workforce." 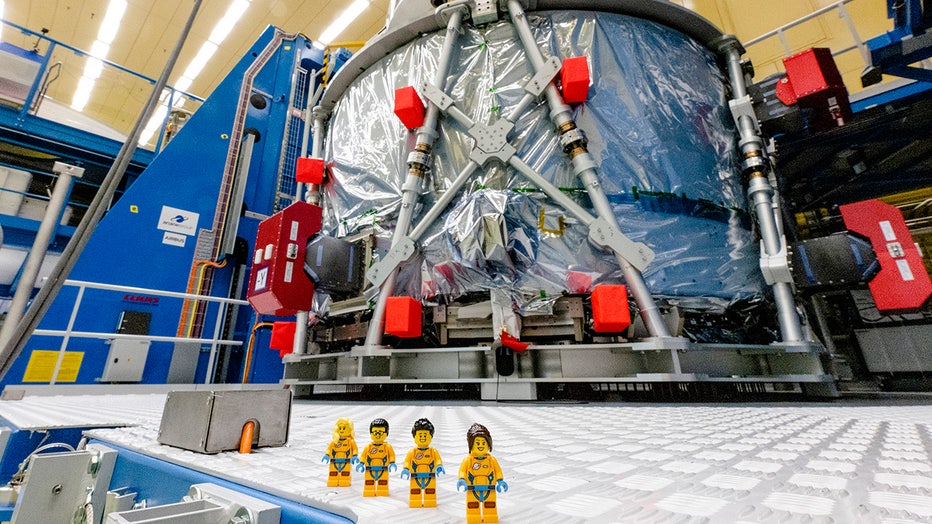 LEGO minifigures in front of the European Service Module that will power the Orion spacecraft on Artemis II. (NASA photo / Radislav Sinyak)

In addition to the minifigs, there are a variety of other interesting bits of cargo aboard. A bolt, mission patch, and even a moon rock from the Apollo 11 mission will make the flight, along with a Snoopy doll that will serve as a zero-G indicator. And NASA is flying a batch of tree seeds, hoping to carry on Apollo 14’s ‘moon tree’ legacy.

RELATED: Snoopy returning to space as ‘zero-G indicator’ on Artemis I flight

NASA and LEGO have a history of partnerships dating back to the 1990s, including everything from robotics competitions to build-offs at major launches. And of course, there are the many LEGO kits designed after real-life NASA spacecraft and others that honor prominent women in NASA’s history.

While the moon may seem like a giant leap for LEGO, it’s actually not the farthest that the popular bricks have traveled. In 2003, when NASA launched Mars rovers Spirit and Opportunity, each rover included LEGO bricks and an image of an "astrobot" brick character. And in 2011, NASA’s Juno probe carried three minifigs representing Jupiter, Juno, and Galileo to the planet Jupiter, where they remain in orbit today. 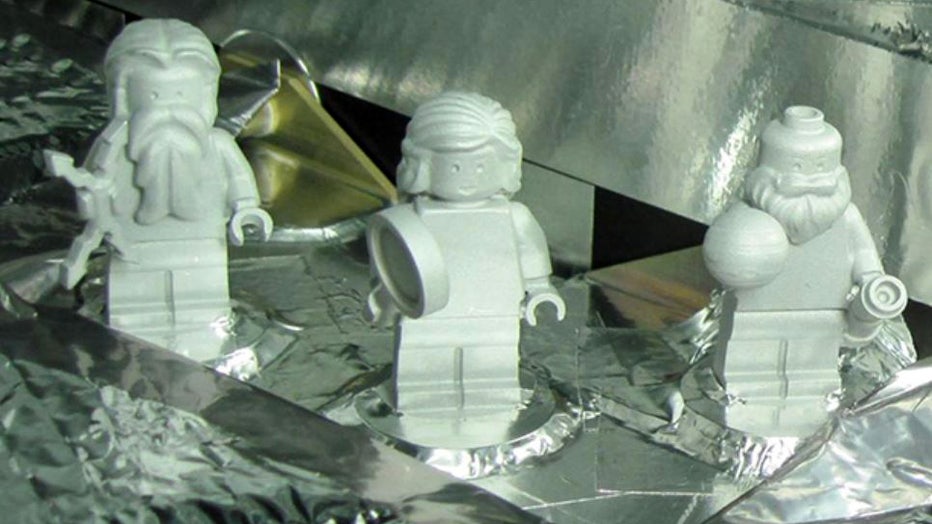 These LEGO figures, meanwhile, will "retire" following this mission.

"After getting a full debrief from Kate and Kyle on their journey around the Moon, they will be on display in the LEGO Education Build to Launch exhibit at the Kennedy Space Center Visitor Complex," Nash noted.

But will any LEGO astronauts ever land on the moon? When asked, O’Brien said there are "no specific plans" in place for Artemis III but didn’t rule it out; Dr. Nash seemed hopeful.

"We believe the sky shouldn’t be the limit for the benefits of learning through play," she added.

RELATED: LEGO Master Model Builder is a real job. Here's what it takes