A report commissioned by the City Council found that the Los Angeles Police Department mishandled various aspects of last spring's mass demonstrations sparked by the May 25 killing of George Floyd in Minneapolis.

LOS ANGELES - A report commissioned by the City Council found that the Los Angeles Police Department mishandled various aspects of last spring's mass demonstrations sparked by the May 25 killing of George Floyd in Minneapolis.

The 101-page report found that many officers were not properly trained in crowd control tactics, illegally detained people who committed infractions, used "less-lethal weapons" on peaceful protesters and created chaos through conflicting orders.

The report was commissioned by the council following the widespread anti-racism and police brutality protests in Los Angeles and throughout the nation in May and June.

In the original motion, council members cited widely shared videos of LAPD personnel using force against demonstrators, including a video of officers beating protesters with batons and shooting rubber bullets into a crowd in the Fairfax District.

The report, which was prepared by a half-dozen former members of the LAPD including a retired commander and assistant chief, found deficiencies in crowd control tactics, planning, command and control, use of less-lethal tools, arrest practices, preparedness and officer wellness.

The review team interviewed more than 100 LAPD members, and city and plaintiff attorneys, and also reviewed department documents, policies, directives and tactics, to reach their findings.

The report found that many command officers lacked expertise in crowd control and were not provided with
"meaningful or relevant command-level training." 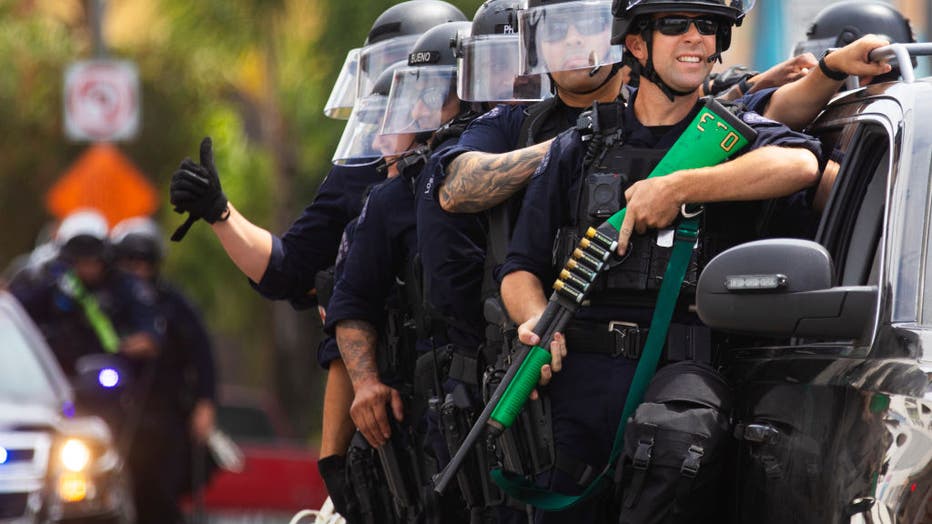 "The department did not adequately prepare the department command staff for events such as those faced in May-June," according to the report, which says a fully staffed command post was not established until May 30, the fourth day of protests, and the officers assigned to the post did not have experience or training to successfully run it.

Several high-ranking officers who were experts on crowd control tactics left the department between 2018 and 2020, and "the lack of expertise and experience in this area impacted the department's ability to control the protests and, in particular, to prevent the criminal element from creating the chaos and violence that ultimately occurred," the report says.

The report notes that violence was caused by a small group of disruptors within the larger group of demonstrators and acknowledged it was "exceedingly difficult" for the officers to isolate them from the peaceful protesters.

The officers' lack of training in crowd control tactics caused them to not, or not be able to, isolate and arrest the people who were throwing objects, creating violence, or looting, according to the report.

Additionally, officers collectively employed a "significant amount" of less lethal tools, including batons, bean bag shotguns, stringer grenades and 37mm and 40mm launchers, which some officers were not properly trained to use, the report says. 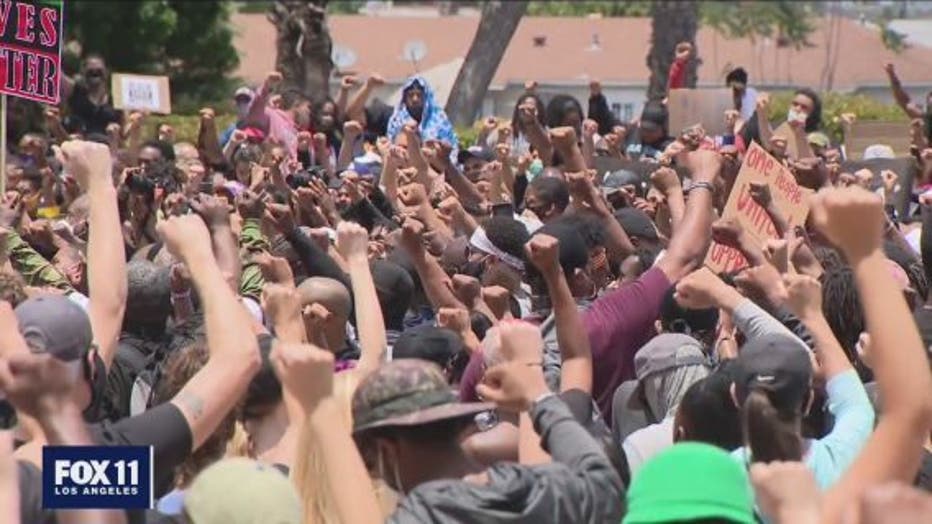 Protesters reported being struck in the face and head and sustaining significant injuries, with some requiring surgery. A number of  lawsuits were filed, alleging plaintiffs were injured by police while peacefully protesting.

"Not all people struck with less lethal munitions during the protests were engaging in criminal behavior," the report says. "This appears to be in part due to the complex and rapid movement of the crowds and at times a lack of adequate training on the 40mm system."

According to the report, officers certified to deploy the 40mm less-lethal launcher receive two hours of training, which teaches them how to manipulate the weapon and fire only a few times at a stationary target. However, in real-life crowd-control situations, a person is not standing still and there are other people in front, behind, or to the side of the target, the report noted. 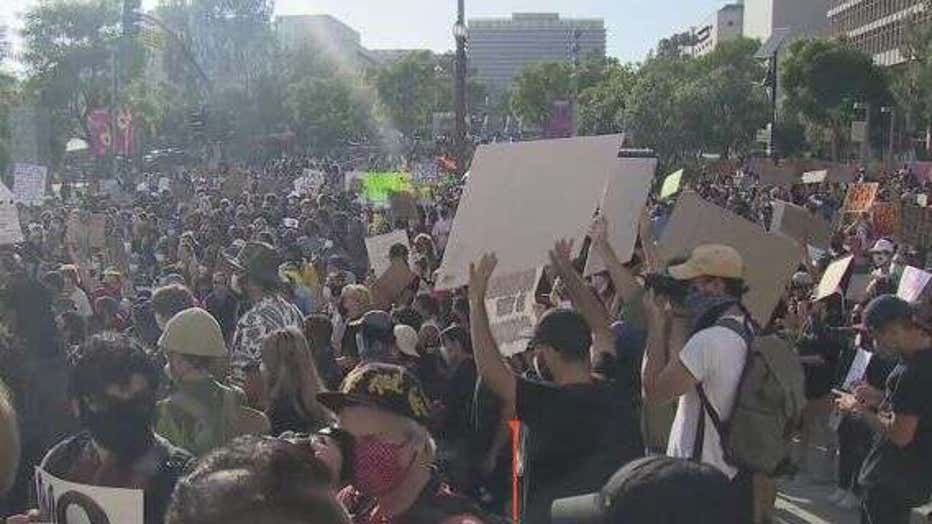 "The use of the 40mm weapon to fire at individuals who are in a crowd situation requires well-trained, experienced and highly skilled individuals," the report says.

The authors recommended that the department analyze its use of the 40mm less-lethal weapons in crowd control situations and potentially limit the weapon's deployment to officers who are well trained and have experience, which was the LAPD policy before 2017.

The report also found that 4,000 people were arrested between May 29 and June 2 and the police department did not have a "clearly articulated plan" for detentions, transportation and processing. People were detained at the scene for hours, without water or access to bathrooms, while handcuffed on pavement, detained, bussed or taken to remote locations. Those who were arrested were forced to be in close proximity despite the COVID-19 pandemic, according to the report.

A field jail was set up at UCLA on June 1, where more than 1,000 people were processed. The personnel at the facility also lacked appropriate training, which "contributed to the lengthy detention of many arrestees, causing them to be released in a location far from their arrest location and in violation of the curfew declaration," the report says.

The field jail was shut down on June 2 following complaints from the UCLA community, according to the report.

The department also failed to communicate with the City Attorney regarding proper charges for arrests, according to the report. People who commit infractions, which is handled like a traffic ticket, are supposed to be released after providing proof of identification and signing a promise to appear. Instead, during the protests, people who committed infractions endured prolonged detentions or were transported to another site.

Overall, the report found flaws in the police department's training and preparedness.

"It appears the department believed that if protests arising out of George Floyd's death occurred in Los Angeles, they all would be peaceful ... They had believed that the good relationships which had been developed with various communities would cause any protests to be peaceful, as they had been in the past," the report says.

The report says the department did not better prepare for future events following insufficient training during previous events, including the 2007 MacArthur Park May Day demonstration. Following that demonstration, the LAPD command staff was required to receive annual training on crowd control, but that training had not occurred for several years prior to the 2020 protests, the report said.

The report also found that there was no consistent chain of command during the protests, which led to "chaos of command."

On at least two occasions, high-ranking officers bypassed the command post and deployed themselves to the field and made tactical decisions. Those officers' "limited situational awareness in the field and conflicting tactical directions only exacerbated the confusion," according to the report.

The report also noted that officers were sleep-deprived throughout the protests because of the long hours they had to work without relief. For command staff, this could have impacted their decisions, "which then has the potential to affect the success of the police strategy and the safety of the officers they command, as well as the safety of the community," according to the report.

The review team was led by Gerald Chaleff, who previously served on the Los Angeles Police Commission as well as at the LAPD as a civilian commanding officer and Special Assistant for Constitutional Policing to then Chief Charlie Beck.