Samara Bliss, Graham Fortgang and other artists of The Locker Room are behind the New York Is Dead billboard seen in L.A.

NEW YORK - A new billboard in Los Angeles says "New York is dead. Don't come back" but the message is not what it might seem.

The sign on Sunset Boulevard is the work of a Brooklyn art collective called The Locker Room NYC.

They say the "New York is Dead" sign is a love letter to those doubling down in New York and choosing to rebuild and a "golf clap to those on their way out."

The installation is a rebuttal to those who are fleeing the city due to coronavirus and other economic reasons.

More people have left New York than any other city in the country but the backers of the campaign say those who remain will make the city stronger. 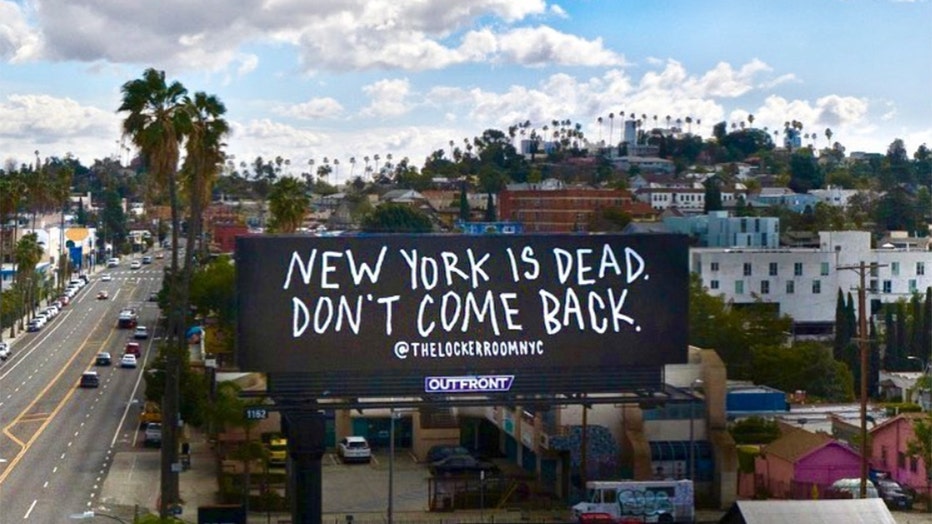 A drone photo by @dashtwo and provided by @thelockerroomnyc shows a billboard in Los Angeles.

The installation will take place across Los Angeles, Miami, and New York - on the streets, in the air, and underground.

The installation is the official kick-off of the group's February Artist residency program in Brooklyn.  15 NY-based artists will "lock down" at the gallery for a month of creation.