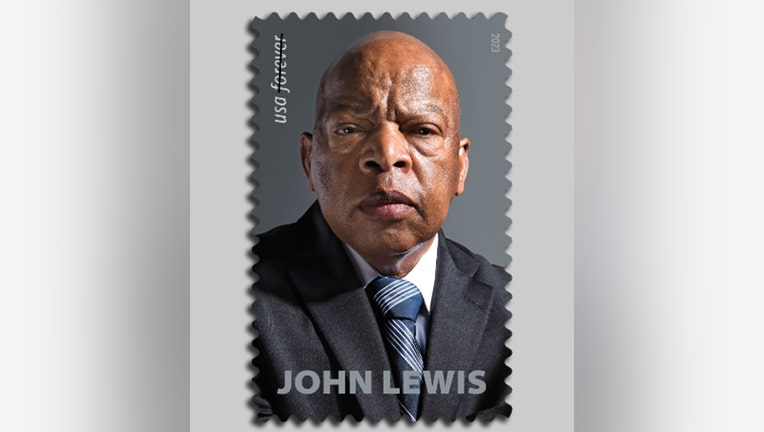 The late congressman and civil rights giant John Lewis will be honored with a postage stamp in 2023, the U.S. Postal Service announced Tuesday.

The design for the stamp uses a photograph taken by Marco Grob for a 2013 issue of Time magazine. Lewis, then 73, wears a dark suit and blue tie and looks directly into the camera.

A 1963 picture of Lewis at a workshop on nonviolent protest in Clarksdale, Mississippi, taken by Steve Schapiro, is planned for the margin of the printed stamp sheets.

The Postal Service said the stamp "celebrates the life and legacy" of Lewis, who died at age 80 in 2020 from pancreatic cancer.

"Even in the face of hatred and violence, as well as some 45 arrests, Lewis remained resolute in his commitment to what he liked to call 'good trouble,'" the agency said.

Lewis' bloody beating by Alabama state troopers in Selma in 1965 helped galvanize opposition to racial segregation. By that time he was a major leader in the Civil Rights Movement, having helped found the Student Nonviolent Coordinating Committee and spoken at the March on Washington just before Martin Luther King Jr.'s "I Have a Dream" speech.

Even in the face of hatred and violence, as well as some 45 arrests, [John] Lewis remained resolute in his commitment to what he liked to call "good trouble."

Lewis went on to be elected to the Atlanta City Council and then to a long career in Congress, where he was frequently hailed as a moral leader.

Other stamps announced Tuesday include ones honoring the Florida Everglades, skateboard art and children's book author and illustrator Tomie dePaola.