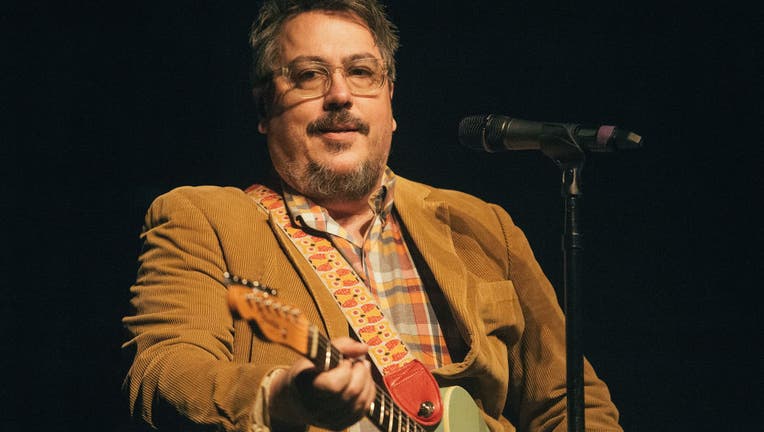 John Flansburgh of They Might Be Giants performs at Iron City on January 30, 2018 in Birmingham, Alabama. (Photo by David A. Smith/Getty Images)

NEW YORK - They Might Be Giants singer-guitarist John Flansburgh was seriously injured in a car crash this week while being driven home from the alternative rock band's first gig on a pandemic-delayed tour, prompting the postponement of shows at least until late August.

Meanwhile, the driver of the car that police said instigated the wreck was awaiting arraignment Friday after being arrested on drunken driving and other charges.

Writing from a hospital bed, Flansburgh told fans he was taking a car service home from Wednesday's show at Manhattan's Bowery Ballroom when the car was T-boned, flipped onto its side, and started smelling of motor oil and smoke.

According to police, the driver who was arrested ran a red light, jumped a curb and plowed into the gate of a housing complex, hitting two cars along the way.

It’s not immediately clear whether the 26-year-old driver has an attorney who can comment on the charges, and no telephone number could immediately be found for his Bronx home.

Everyone in all three cars were taken to hospitals, police said. Flansburgh, 62, wrote that he suffered seven broken ribs, some of them fractured in multiple places.

Formed in the early 1980s by Flansburgh and John Linnell, They Might Be Giants rose to fame with clever, catchy songs and a not-afraid-to-be-geeky persona. Known for tunes including "Birdhouse in Your Soul," "Boss of Me" and a version of the quirky 1953 tune "Istanbul (Not Constantinople)," the duo went platinum with the 1990 album "Flood." The new tour is a belated celebration of the disc's 30th anniversary.

"It was so wonderful to finally be back up on stage and playing for all of you again," Lindell wrote to fans in a message announcing that the remaining June dates are postponed. The band hopes to resume the tour Aug. 30 in Asbury Park, New Jersey, he said.

Flansburgh wrote that even as he sat in a CT scanner shortly after the accident, he was thinking about how to get back on the road.

"Someday we will rock again — and for me, that day couldn’t come soon enough," he wrote. But for now, "I will be watching reruns of ‘Sex in the City’ until I am strong enough to reach the remote.