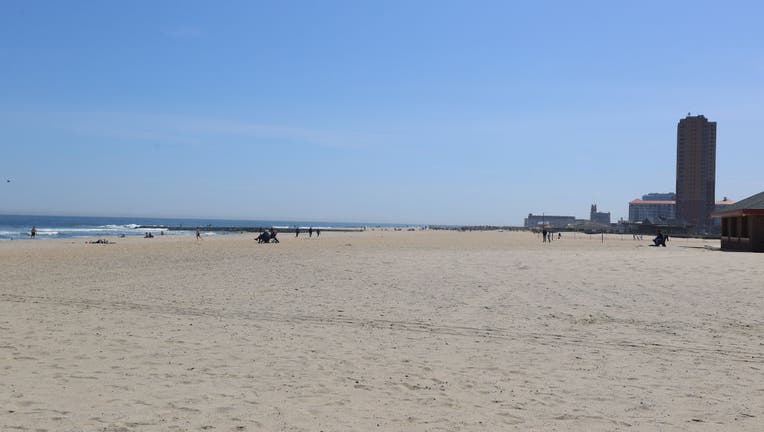 A general view of an empty Loch Arbour Beach and the Atlantic Ocean during the Coronavirus (COVID-19) pandemic on April 25, 2020 in Loch Arbour, NJ. (Photo by Rich Graessle/Icon Sportswire via Getty Images)

POINT PLEASANT BEACH, N.J. (AP) — American taxpayers helped pay for the sand on the Maryland Avenue beach, a popular spot on the New Jersey shore that was devastated by Superstorm Sandy and that has since been rebuilt and maintained with federal money.

Slated to reopen in mid-May, the plan was for only residents of Point Pleasant Beach to use it, at least at first.

But on Friday afternoon, New Jersey's governor threw cold water on that plan, which is also being used by some shore towns around the country as they inch back toward resuming normal activities in the midst of the coronavirus outbreak.

Democratic Gov. Phil Murphy said reopening public beaches is a local decision. But in doing so, he said, the entire public has to be allowed on the sand.

“A township cannot actually legally restrict folks from outside of their township,” Murphy said. “So that’s not actually within their right to do so.”

From Maine to Florida, officials in some towns say the restrictions are a necessary first step to see if limited beach crowds comply with distancing requirements; the answer will go a long way toward deciding when, or even if, the beaches will be opened up to everyone.

Paul Kanitra, the Republican mayor of Point Pleasant Beach, said earlier this week he felt confident that local, state and federal emergency declarations gave his town the authority to open its beaches as it saw fit to protect people from the virus.

He was surprised to hear Murphy's directive on Friday.

“I've yet to see a solution from them to protect our town from areas where the virus is still raging,” Kanitra said. “If there's no legal protection from forcing the virus on us, there's no way we can accept that. It's irresponsible.”

Long-established law in New Jersey, including a 1984 state Supreme Court ruling, says public beaches must be open to everyone, not just local residents. But these are not normal circumstances. New Jersey has the second-largest number of coronavirus cases in the nation, trailing only New York. Officials in the Jersey Shore towns of Ship Bottom, Harvey Cedars and Long Beach Township also designated their beaches as residents-only.

But critics say the restrictions almost certainly violate federal and state laws governing equal protection, creating two classes of citizens with different rights based solely upon where they live.

Beaches elsewhere are imposing similar restrictions, including Fort Myers Beach and Key West in Florida. Sheriff’s officers are stopping traffic at highway checkpoints leading into Monroe County, which includes the Keys and turning around nonresidents without a valid business purpose to enter the county at least until June.

Others tried a residents-only policy for a while, but then dropped it, including North Haven, an island off the coast of Maine; and the North Carolina towns of Oak Island, Emerald Isle, and Atlantic Beach.

Atlantic Beach Mayor Trace Cooper said his town avoided questions of constitutionality and public trust requirements by prohibiting parking near the beach, a situation that remained in place for about three weeks.

“We never closed the beach or stood on the sand checking IDs,” he said. “We just closed the parking lots."

South Carolina Gov. Henry McMaster ordered all public beach access closed March 30, while people with property on the beach could still enjoy the sand and water. He rescinded that order about three weeks later, leaving the decision on public access points up to local governments.

In Point Pleasant Beach, the residents-only plan has divided the town, as well as its nearby neighbors who use the beaches and patronize the restaurants and the boardwalk attractions.

Many year-round residents strongly favor the ban on outsiders. The mayor agrees. He said that as of Friday, Point Pleasant Beach had 31 virus cases in a year-round population of about 4,500, and could see that number spike if large crowds from areas where the virus is more prevalent come to town.

“My residents would lose their minds to know we'd be opening up to all of that,” Kanitra said.

He considered, then rejected, a proposal to set a limit on how many people could be allowed on the beach, regardless of where they come from, and halt access once that number is reached. People would quickly learn that they had to get there early, and would begin lining up hours before the opening time, creating the very lines sand crowding the policy seeks to avoid, Kanitra said.