The incident occurred as mourners carried the coffin of Shireen Abu Akleh, causing them to briefly drop the casket in a shocking start to the procession. (Credit: Jmedia via Storyful)

JERUSALEM - It was a chaotic scene outside a Jerusalem hospital Friday when Israeli police pushed and beat pallbearers at the funeral for slain Al Jazeera journalist Shireen Abu Akleh.

The incident occurred as mourners carried the coffin of Abu Akleh, causing them to briefly drop the casket in a shocking start to the procession.

Thousands of people, many waving Palestinian flags, attended the funeral. It was believed to be the largest Palestinian funeral in Jerusalem since Faisal Husseini, a Palestinian leader who died in 2001.

According to Al Jazeera, Israeli police had surrounded the hospital ahead of the violence. 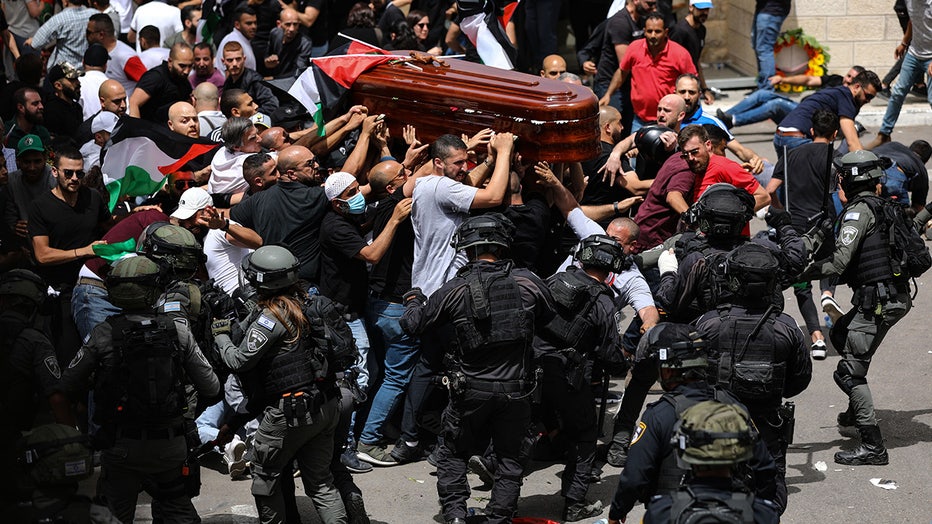 Israeli forces intervene in Palestinians carrying the coffin of slain Al-Jazeera journalist Shireen Abu Akleh out of the morgue of the Saint Joseph Hospital in East Jerusalem on May 13, 2022. Abu Akleh, 51, was shot in the head on May 11 by the Israe

The footage obtained by Storyful shows the scene of violence unfolding. Police are seen pushing back the pallbearers and mourners in the crowd with batons. A loud bang can be heard before the coffin is almost dropped.

Quds News Network, which cited the Palestine Red Crescent Society, said "dozens" of people were injured as police clashed with the crowd.

The scenes of violence were likely to add to the sense of grief and outrage across the Arab world that has followed the death of Abu Akleh, who witnesses say was killed by Israeli troops Wednesday during a raid in the occupied West Bank.

The Palestinian health ministry said Abu Akleh, 51, was a well-known Palestinian female reporter for the broadcaster’s Arabic language channel, and was shot and died soon afterward. Another Palestinian journalist working for the Jerusalem-based Al-Quds newspaper was wounded but is in stable condition.

The Qatar-based broadcaster blamed Israel. In a statement flashed on its channel, it called on the international community to "condemn and hold the Israeli occupation forces accountable for deliberately targeting and killing our colleague, Shireen Abu Akleh."

An Israeli official said the details of the funeral had been coordinated with the family ahead of time to ensure it would run smoothly, but that "masses began gathering around the hearse of Shireen Abu Akleh and chaos ensued," preventing the procession from going along its intended route. The official spoke on the condition of anonymity in line with regulations.

Al Jazeera said in a statement that the police action "violates all international norms and rights."

"Israeli occupation forces attacked those mourning the late Shireen Abu Akhleh after storming the French hospital in Jerusalem, where they severely beat the pallbearers," it said. The network added that it remains committed to covering the news and will not be deterred.

The focus should be "marking the memory of a remarkable journalist who lost her life," Psaki said. "We regret the intrusion into what should have been a peaceful procession."

This story was reported from Los Angeles. The Associated Press and Storyful contributed.