President Joe Biden announced Monday that he's boosting the amount of COVID-19 vaccines that will be sent overseas from the U.S. by 20 million doses.

NEW DELHI - India has surpassed 300,000 virus-related deaths, the nation with the third-highest death toll during the pandemic after the United States and Brazil, as the country faces a surge of infections impacting the poorer countryside.

The grim milestone comes as slowed vaccine deliveries have impacted the country’s ability to fight the pandemic, as well as a rare but deadly "black fungus" infection, called mucormycosis, affecting COVID-19 patients and worrying doctors.

India’s death toll is now the third-highest in the world, accounting for 8.7% of the 3,464,799 COVID-19 deaths around the world, according to data compiled by Johns Hopkins University.

From the remote Himalayan villages in the north, through the vast humid central plains and to the sandy beaches in the south, the pandemic has swamped India's underfunded health care system after spreading fast across the country.

In the capital, New Delhi, residents have died at home with no oxygen as hospitals exhausted limited supplies. In Mumbai, COVID-19 patients have died in crowded hospital corridors. In rural villages, fever and breathlessness took people before they were even tested for coronavirus.

While the large cities have seen signs of improvement in recent days, the virus appears to have already taken a ghastly toll in the country’s vast rural areas — where a majority of the people live and where health care is limited. 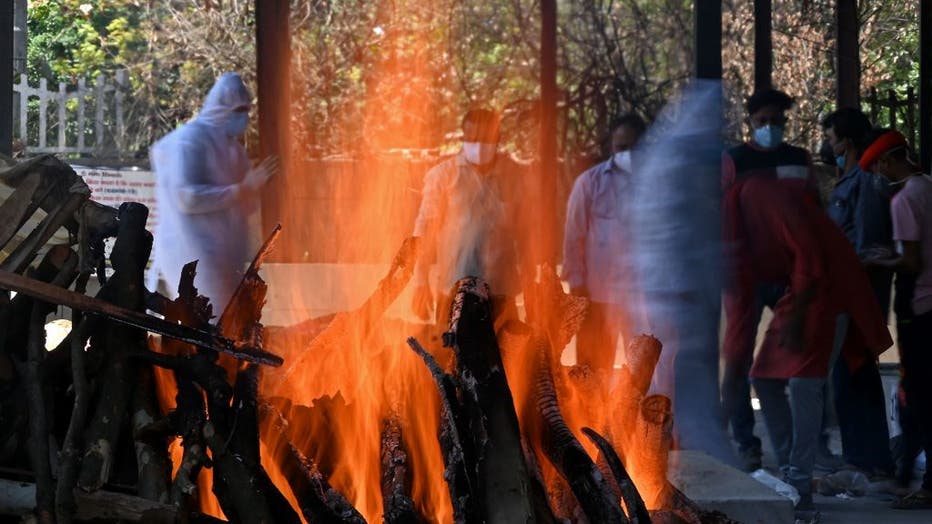 Family members and relatives stand next to a funeral pyre of a COVID-19 victim at a crematorium in New Delhi on May 24, 2021, as India passed more than 300,000 deaths from coronavirus pandemic. (Photo by SAJJAD HUSSAIN/AFP via Getty Images)

In recent weeks, hundreds of bodies have washed up on the banks of the Ganges River in Uttar Pradesh state. Many others have been found buried in shallow graves along its sandy banks. It has prompted concerns that they’re the remains of COVID-19 victims.

Doctors have also been warned to look out for the so-called "black fungus" infections among coronavirus patients, particularly those with diabetes. The infection, which could be fatal, may cause black discoloration of the nose, facial pain, numbing or swelling, fever, chest pain or other issues.

Akshay Nair, a Mumbai-based eye surgeon, told BBC News that in the month of April he had already seen 40 patients across three hospitals suffering from the infection. He told the news outlet that many of the patients had diabetes and a history of COVID-19 infection.

The Indian Council of Medical Research advised doctors to monitor blood glucose levels post COVID-19 discharge and in diabetics, and to "use steroid judiciously – correct timing, correct dose and duration," in a bid to cut down on occurrences.

Average daily deaths and cases have slightly decreased in the past few weeks and the government on Sunday said it is conducting the highest number of COVID-19 tests, with more than 2.1 million samples tested in the previous 24 hours.

But India’s vaccination drive has also slowed recently, and many states say they don’t have enough vaccines to administer. The world’s largest vaccine-producing nation has fully vaccinated just over 41.6 million people, or only 3.8% of its nearly 1.4 billion population.

The slow vaccination drive has been blamed on a mixture of overconfidence, poor planning and bad luck. India’s two main COVID-19 vaccine producers, the Serum Institute of India and Bharat Biotech, have faced production problems.

The Serum Institute of India is making the AstraZeneca vaccine, and Bharat Biotech is making its own local vaccine. To help with the shortage, India has also greenlit the Russian vaccine Sputnik V, and 200,000 doses of it arrived last week.