A humpback whale was spotted swimming in the Hudson River near the Intrepid Sea, Air and Space Museum.

NEW YORK - A humpback whale was spotted swimming in the Hudson River off Manhattan and may still be in the area.

Photos and videos posted to Twitter by @AndresJavierNYC on Monday showed the massive mammal just off Pier 84 and the Intrepid Sea, Air & Space Museum at about 4:15 p.m.

Gotham Whale, a non-profit research organization, said the whale was sighted Monday and Tuesday and urged anyone boating in the area to slow down to avoid injuring the animal. 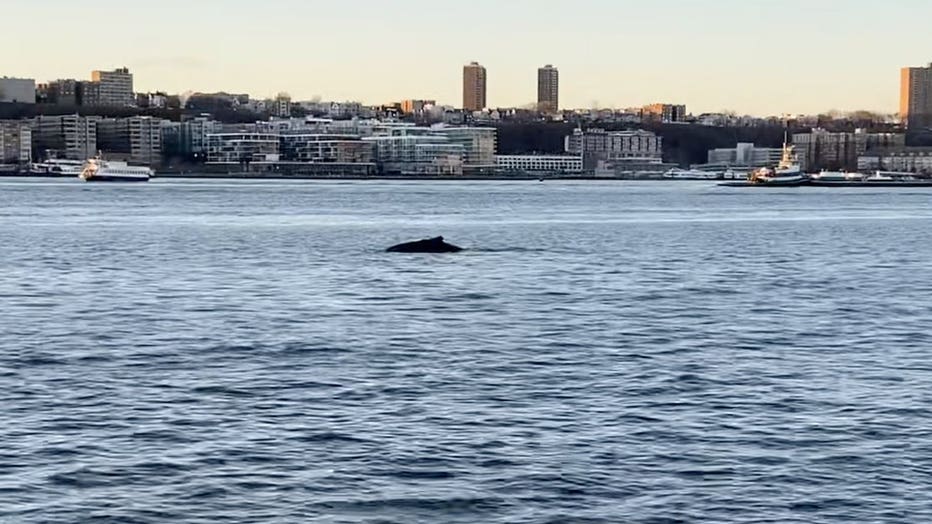 A humpback whale was spotted in the Hudson River off Manhattan and near the Intrepid Sea, Air and Space Museum. Photo credit: @AndresJavierNYC

“Mariners around NYC please SLOW DOWN and be on the look out for the #HumpbackWhale sighted in the #HudsonRiver on 12/07 and 12/08."

The organization said the whale was likely in the river looking for bunker fish to feast on.

Humpback whales live in oceans and travel long distances looking for food. The National Oceanic and Atmospheric Administration says whales have one of the longest migrations of any mammal on the planet with some swimming "5,000 miles from tropical breeding grounds to colder, productive feeding grounds."

There has been a tremendous surge of whales in waters around New York City in recent years.

There are numerous theories about why whales are suddenly flocking to the city, but one of the most widely held is that the menhaden population has grown around New York and New Jersey. Menhaden are small, schooling fish that humpbacks relish, and environmentalists believe cleaner waters and stricter conservation laws have increased their numbers near New York City.

There were more than 300 observations of 500 total whales in 2019, said Paul Sieswerda, President of Gotham Whale. That's up from three sightings of five whales in 2011, after which a steady climb began, he said.

“Somehow or other more and more whales seem to be getting the message that New York is a good place to dine,” said Sieswerda. “That kind of magnitude of increase is just phenomenal.”

Whales off of New York City

Whale watch captains and scientists say recent years have seen a tremendous surge in the number of whales observed in waters around the Big Apple.