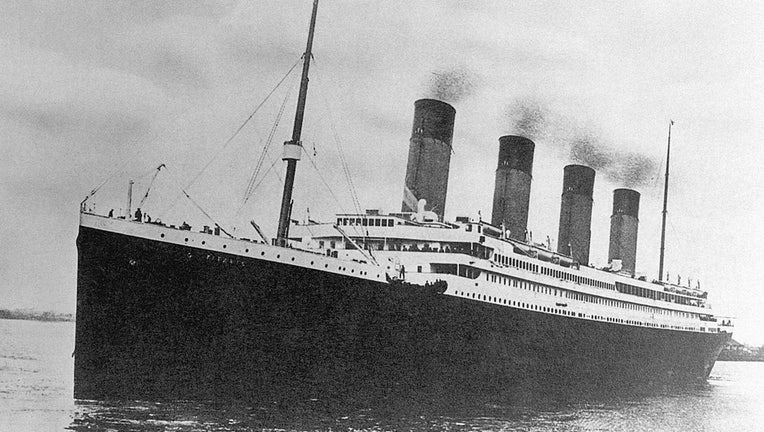 Her story puts many Greek tragedies to shame.

The Titanic was a beauty destined for greatness, but the fates were against her. On a cold April night in 1912, she fell from grace, sinking to her watery grave in the icy northern Atlantic.

But as is the case with any story, there’s more to this tale.

Although an iceberg famously led to the Titanic’s downfall, a background character — the weather — set the stage for a series of unfortunate events that ultimately culminated into a most historic disaster. 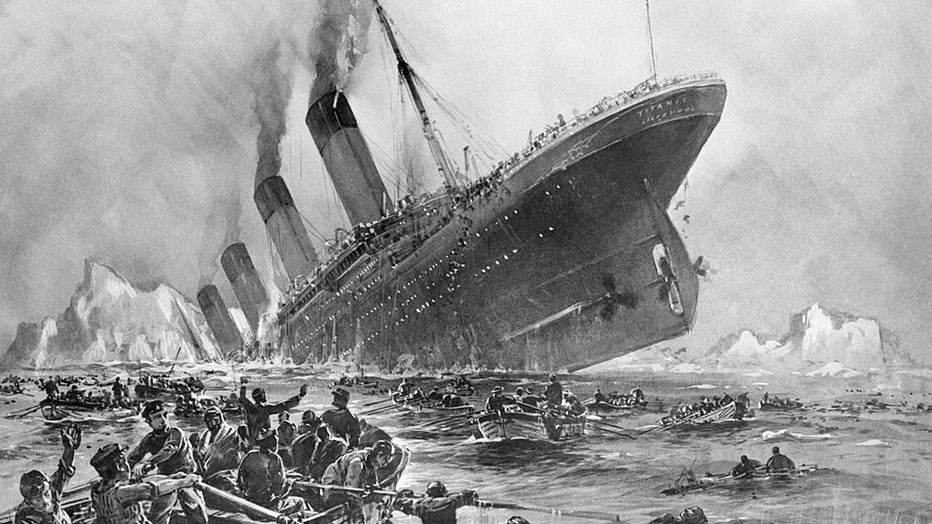 FILE - This terrible scene, painted by German artist Willy Stoewer, depicts the sinking of the Titanic, the proud British luxury liner which struck an iceberg off New Foundland, April 14, 1912, carrying 1,517 persons, many of them Americans, to their (Getty Images)

"The reason why we're all fascinated by the Titanic today, to a certain extent, is because her story is a kind of modern tragedy," said Tim Maltin, Titanic author and historian.

According to Maltin, the tragedy that befell the Titanic may have been caused by unusual atmospheric conditions.

"The weather, the night the Titanic sank, was absolutely extraordinary," he said. "It was one of the calmest nights and clearest nights in history."

That fateful night was on April 14, 1912. The Titanic was en route from Southampton, England to New York City, passing through the waters about 460 miles south of Newfoundland, Canada. 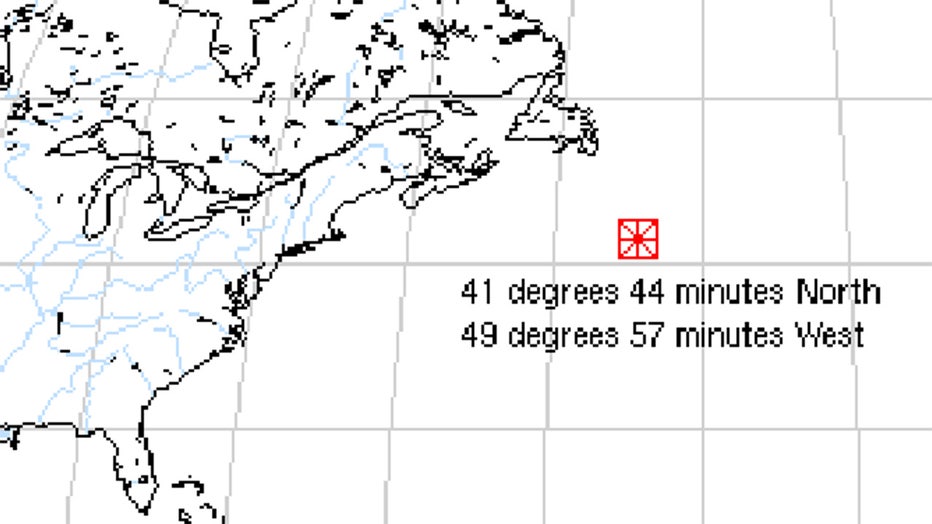 A red marker notes the approximate location of the Titanic when it sank off the southern coast of Newfoundland, Canada. (NOAA)

According to Maltin, in this particular part of the Atlantic Ocean, the warm waters of the Gulf Stream and cool waters of the Labrador Current collided and failed to mix together.

"This created what we call a thermal inversion, where you have much warmer air above very cold air, among the icebergs," he said.

Usually, warm air sits beneath a layer of cold air, as the sun heats the ground and air becomes cooler at higher altitudes. So when the opposite or inverted layering occurs, it is called a thermal inversion. 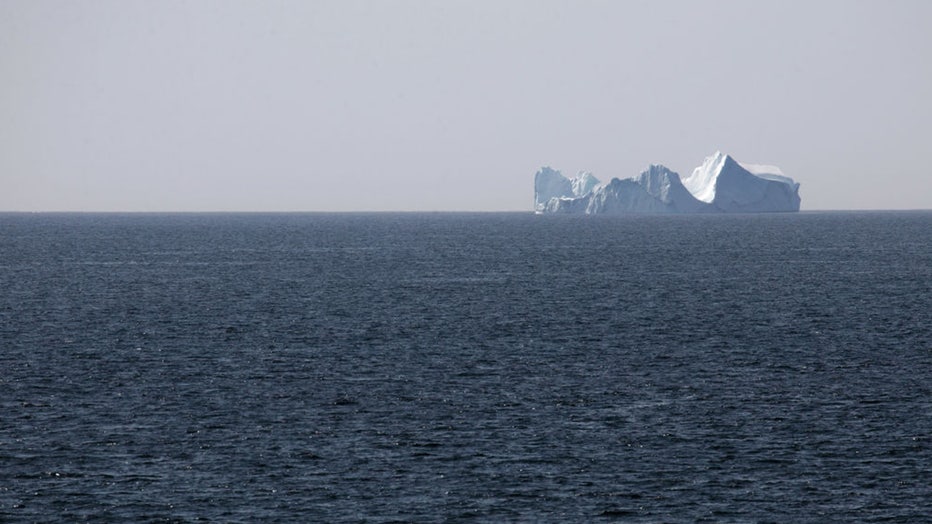 FILE - A large iceberg floats in the distance in the Atlantic Ocean, April 26, 2017 off the coast of Ferryland, Newfoundland, Canada.  (Drew Angerer/Getty Images)

The thermal inversion on the night the Titanic sank essentially turned the layer of warm air into a weighted blanket that pushed aerosol molecules down into the layer of cold air below. That created clear skies at high altitudes (where the warm air was), but a hazy veneer closer to sea level (where the cold air was).

"The problem is that the molecules themselves in the air actually had the effect of scattering light," Maltin said. 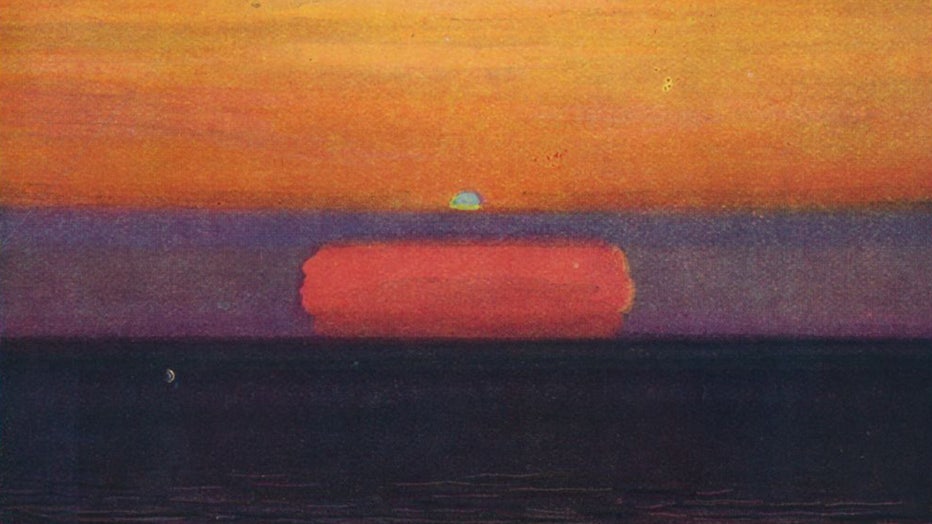 FILE - The Green Flash at Sunset, Rarest Prismatic Colour Refracted by the Atmosphere', circa 1935.  (The Print Collector/Getty Images)

"This had the effect of reducing the apparent angular size of the berg in the dark conditions that night," Maltin said. "And with the berg coming straight towards the lookouts, it unfortunately meant that the berg had to be that much nearer before it was seen."

And by the time the Titanic saw the iceberg, it was too late. 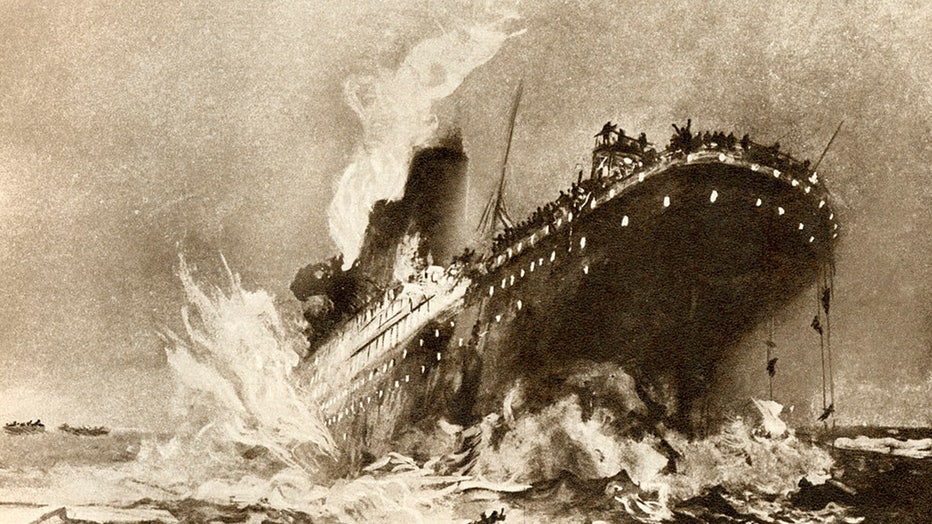 FILE - Rms Titanic Of The White Star Line Sinking Around 2 20 Am Monday Morning April 15 1912 After Hitting An Iceberg In The North Atlantic. ( Universal History Archive/Universal Images Group via Getty Images)

The Titanic fired rockets into the air to signal their distress to nearby ships, but due to the mirage "lifting" the horizon upward, the rockets were too small to be seen.

This illusion also lifted the horizon to create a veil over part of the Titanic.

"There was a rescue ship called the Californian, only about 10 miles away from where Titanic sank," Maltin said. "But through a series of very tragic events, because the air was so clear, because the horizon appeared to be slightly raised beyond Titanic, instead of her being an 800-foot 10 miles away, they judged her to be a 400-foot ship 5 miles away." 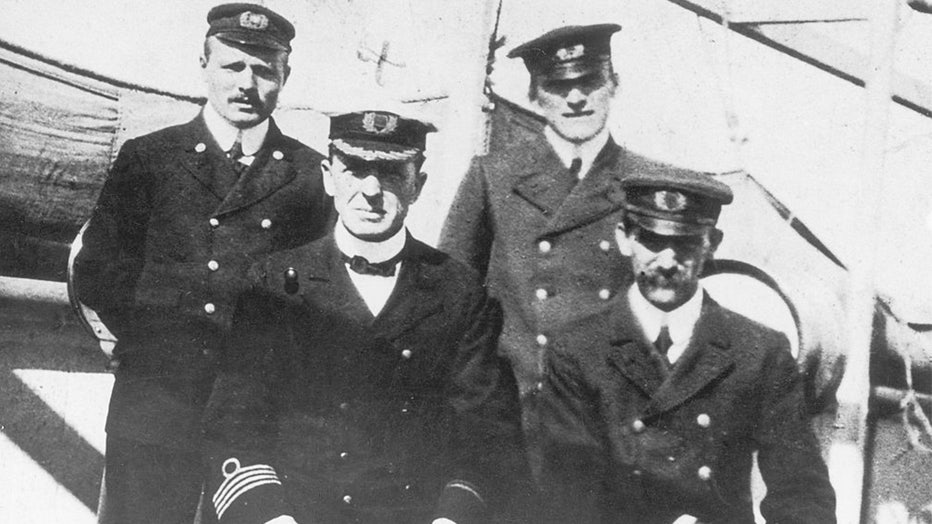 This judgment led the crew of the Californian to believe that they had not found the Titanic. Rather, they thought they found a small ship in the distance.

And because the crew thought the ship was merely a small vessel, they did not believe it had radio capabilities, as only large ocean liners were equipped with that technology at the time. Thus, the Californian did not use their radio to hail what was indeed the sinking Titanic.

The series of unfortunate events continued.

"They then got their Morse lamp signal out to try and Morse to this vessel that they thought didn't have radio," Maltin said. "Unfortunately, the layered air in the thermal inversion caused really a sort of scintillation." 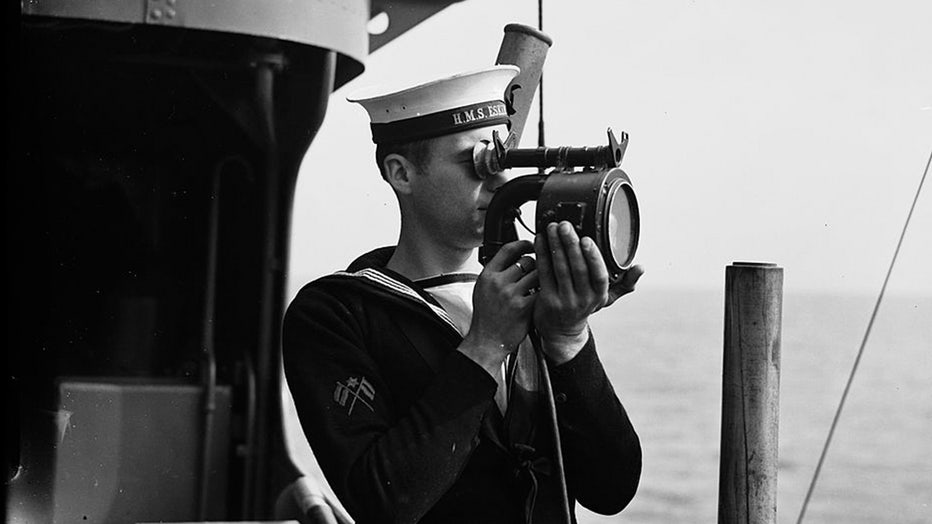 The low-lying aerosols of the thermal inversion caused the light emitted by Morse lamp symbols — calls for help — to scatter in the air.

"So, Titanic was saying, ‘We are the Titanic sinking, have your boats ready.’ And Californian was looking at Titanic and assuming that Titanic was burning flickering oil lamps when in fact, the Titanic, of course, was a very modern vessel with very solid electric lamps," Maltin said.

"These extraordinary atmospheric conditions not only caused the boat to be sighted critically just too late, but they also caused a ship only 10 miles away to fail to come to Titanic's aid."

Instead, another ship the Carpathia, came to help Titanic – but only arrived more than an hour after the ship had already sank. 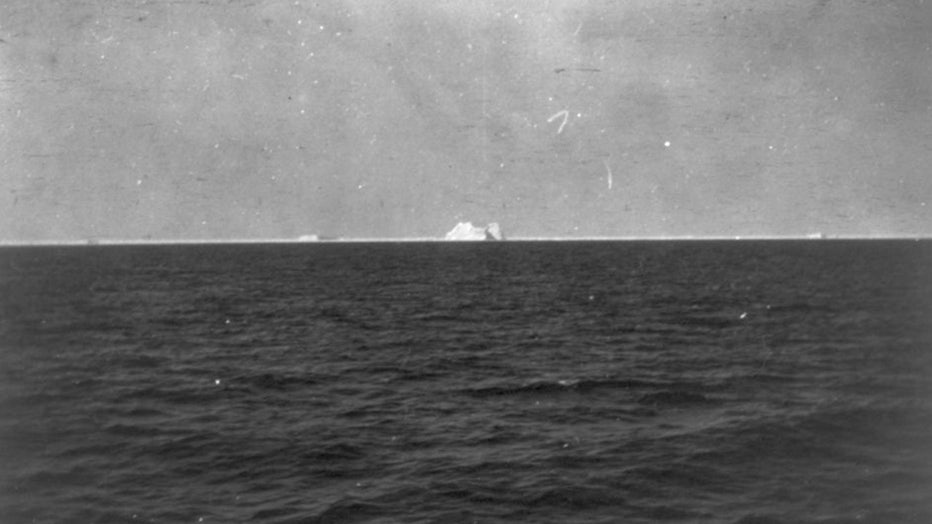 FILE - The iceberg that sank the White Star Line's Olympic-class RMS Titanic which struck it on 12 April 1912 on her maiden voyage from Liverpool to New York with loss of over 1,500 lives.  (Photo12/Universal Images Group via Getty Images)

That night, about 1,500 of the Titanic’s passengers and crew were lost to the sea.

Many lessons were learned from that fateful night and later implemented.

"After the Titanic sank, they did two things: They instituted 24-hour radio watch, which was extremely helpful. They also instituted the International Ice Patrol, which actually sends helicopters over this area to look for and plot and tell ships where the ice is," Maltin said. 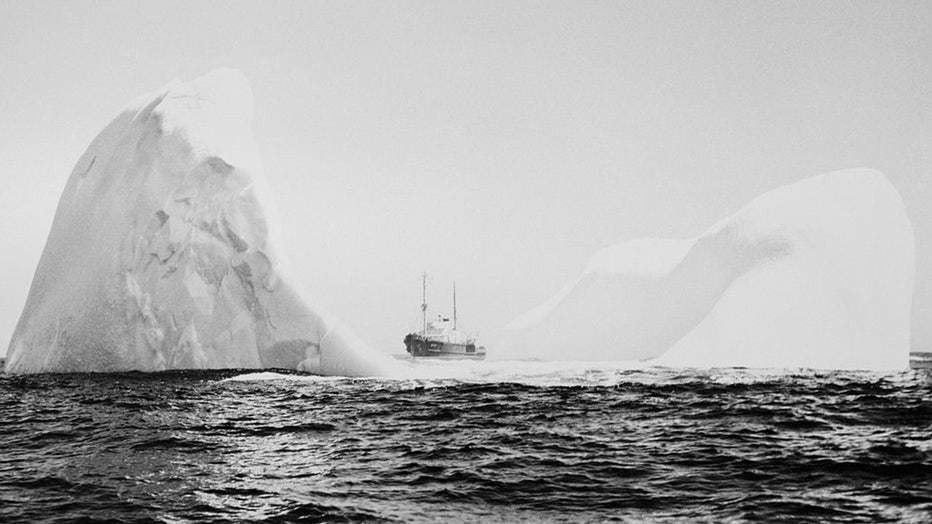 As far as thermal inversions go, Maltin said ships are far more equipped to handle them today — however, they aren’t completely in the clear.

"There is evidence that radar struggles in this type of thermal inversion situation," he said. "I don't want to worry people, but it is possible that this kind of accident could happen again."

"Titanic symbolizes the fact that no matter how brilliant and creative humanity is, the world and the universe always has the upper hand."