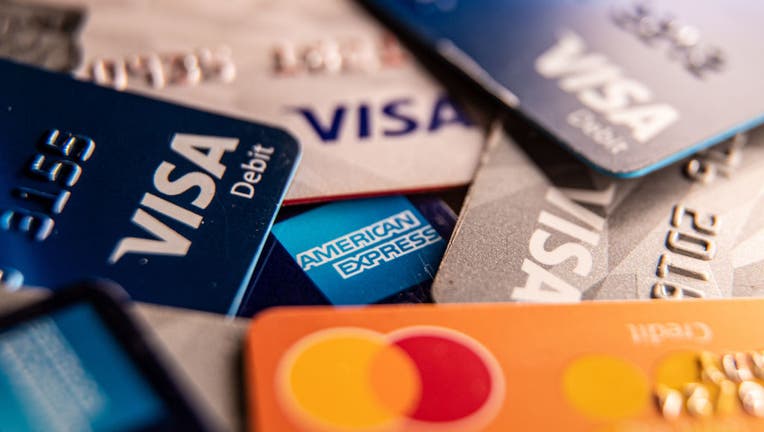 FILE - In this photo illustration the Visa, Mastercard, and American Express logos are seen on credit and debit cards on March 14, 2022, in Somerset, England. (Photo by Matt Cardy/Getty Images)

Credit card debt held by American households surged by 13% on an annualized basis in the second quarter, representing the sharpest climb since 1999 as consumers increasingly rely on credit amid sky-high inflation.

The Federal Reserve Bank of New York's Quarterly Report on Household Debt and Credit released Tuesday shows total household debt reached $16.15 trillion at the end of June, an increase of $312 billion from the same quarter a year ago with mortgage, car loan and credit card balances all rising.

Mortgage balances climbed by $207 billion to $11.39 trillion, auto loans rose by $33 billion to $199 billion, and credit card balances increased by $46 billion and are now just below pre-pandemic levels, according to the report. Student loan balances, which have been on pause since early on in the pandemic, remained relatively unchanged.

All told, non-housing balances increased by $103 billion (2.4%) from the first quarter, the greatest quarterly increase since 2016.

"The second quarter of 2022 showed robust increases in mortgage, auto loan, and credit card balances, driven in part by rising prices," said Joelle Scally, administrator of the Center for Microeconomic Data at the New York Fed.

"While household balance sheets overall appear to be in a strong position, we are seeing rising delinquencies among subprime and low-income borrowers with rates approaching pre-pandemic levels," Scally added.

The financial benefits to getting married

Experts say married couples can qualify for better credit and better terms on their loans, among many other financial benefits.

The New York Fed said in a separate blog post that "With the supportive policies of the pandemic mostly in the past, there are pockets of borrowers who are beginning to show some distress on their debt," noting that "the delinquency transition rates for credit cards and auto loans are creeping up, particularly in lower-income areas."