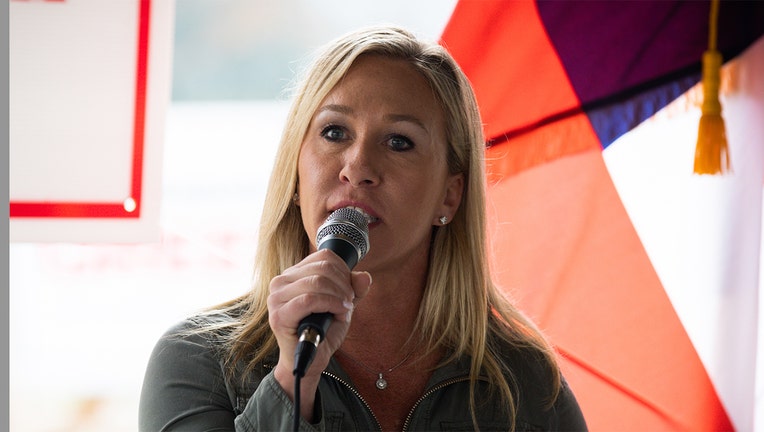 "Marjorie is wrong, and her intentional decision to compare the horrors of the Holocaust with wearing masks is appalling," McCarthy said in a statement. "The fact that this needs to be stated today is deeply troubling."

Greene, a conservative firebrand and ally of former President Donald Trump, has thrived on stirring controversy, pushing conspiracy theories and forcefully confronting her colleagues since taking her seat in the House in January. But, until now, Republican leaders have proven hesitant to criticize her and refused to join with Democrats earlier this year when they voted to strip her of committee assignments.

Their rebuke of her Tuesday came after Greene made an appearance on a conservative podcast, "The Water Cooler with David Brody," released last Thursday. In her interview, Greene excoriated safety protocols adopted by House Democrats, including a requirement that masks be worn on the House floor. She also called House Speaker Nancy Pelosi "mentally ill" while suggesting that the rules were comparable to the treatment of Jews during the Holocaust.

"You know, we can look back in a time and history where people were told to wear a gold star. And they were definitely treated like second-class citizens, so much so that they were put in trains and taken to gas chambers in Nazi Germany," Greene said on the podcast. "This is exactly the type of abuse that Nancy Pelosi is talking about."

After her remarks sparked a firestorm of online criticism, Greene leaned in to the comparison further.

On Tuesday, she tweeted out a news story about a grocery store chain that plans to allow vaccinated employees go maskless. Those who do would have a logo on their nametags indicating they had been vaccinated.

"Vaccinated employees get a vaccination logo just like the Nazi’s forced Jewish people to wear a gold star," Greene tweeted.

"Equating mask wearing and vaccines to the Holocaust belittles the most significant human atrocities ever committed," said Rep. Elise Stefanik, the No. 3 GOP leader.

. But until now, Republican