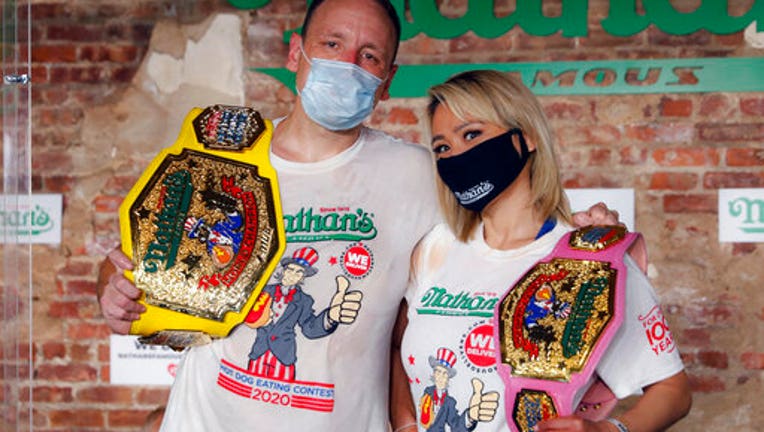 Chestnut downed 75 wieners and buns in 10 minutes and Sudo downed 48 1/2 in a competition that took place at an undisclosed location with no in-person spectators. Both hot dog totals were world records. “I’m always pushing for a record,” Chestnut said before the contest aired on a live sports-starved ESPN. “I know that’s what the fans want."

Officials including Mayor Bill de Blasio, Sen. Charles Schumer, and former Mayor Mike Bloomberg gathered in lower Manhattan earlier Saturday for the reopening of the Sept. 11 memorial plaza, which had been roped off since mid-March when cultural institutions shut down across the city to halt the spread of the virus.

“Independence Day is a fitting occasion to reopen the 9/11 Memorial,” Bloomberg, the chairperson of the National Sept. 11 Memorial and Museum, said in a prepared statement. “As we celebrate the revolutionary Declaration issued 244 years ago—and the promise of equality for all that we are still working to fulfill —we also honor all who have paid the cost, and borne the burden, of sustaining American freedom.”

Family members of people who died in the Sept. 11, 2001, attacks were welcomed onto the plaza Saturday afternoon. The memorial will be open to the public from 1 to 8 p.m. starting Sunday, with masks and social distancing required. The museum remains closed.

New Yorkers were urged to avoid large holiday gatherings in order to prevent a surge in coronavirus cases like other states are seeing.

Gov. Andrew Cuomo said there were more than 720 new confirmed coronavirus cases reported Friday statewide, and 11 deaths were attributed to the virus—a far cry from the peak of New York's outbreak in April, when some days saw more than 10,000 new infections and 700 deaths statewide.

New York City's July 4 festivities will be capped by a televised fireworks display over the Empire State Building. Fireworks sponsor Macy's said the show, to be broadcast on NBC, would feature “a spectacular display choreographed to an epic musical score."