Vice President Kamala Harris and Speaker of the House Nancy Pelosi made history at the first two women to share the stage during President Joe Biden's first Congressional address during his first 100 days.

WASHINGTON - Vice President Kamala Harris and House Speaker Nancy Pelosi made history on Wednesday as the first women — one of them Black and Indian American — to share the stage in Congress during a presidential address.

As President Joe Biden took to the podium, he marked the historic moment, saying it was "about time."

Harris and Pelosi began the night with another historic moment: An elbow-bump hello, a pandemic spin on the traditional handshake. Both stood side by side behind the dais in the House chamber, chatting with each other and occasionally waving to lawmakers as the group waited for President Joe Biden to arrive.

Biden is set to deliver his first prime-time speech to a joint session of Congress on Wednesday night flanked by Pelosi and Harris, two California Democrats.

"It's pretty exciting. And it's wonderful to make history. It's about time," Pelosi said hours before the speech during an interview on MSNBC. 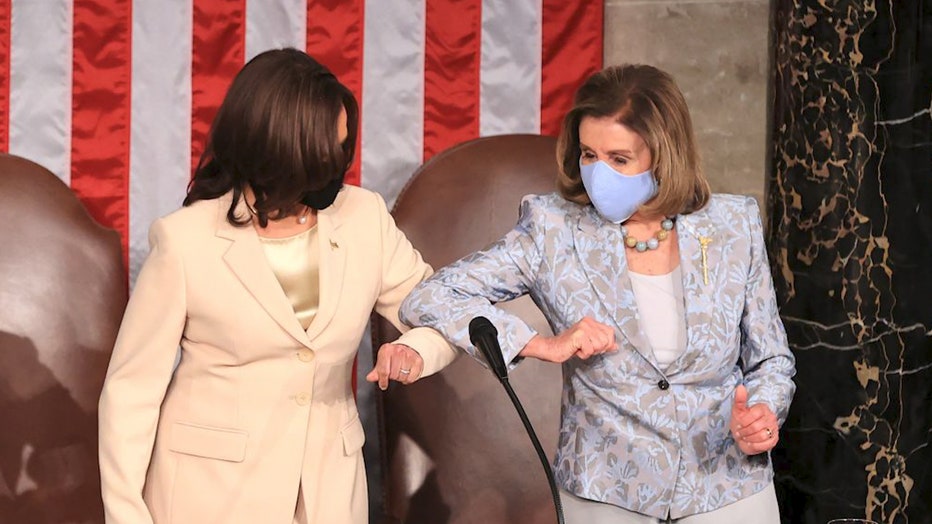 FILE - US Vice President Kamala Harris (L) greets House Speaker Nancy Pelosi (D-CA) ahead of US President Joe Biden addressing a joint session of Congress at the US Capitol in Washington, DC, on April 28, 2021.

RELATED: Biden's first 100 days: A look at what the president has done since taking office

Pelosi already knows what it feels like to sit on the rostrum in the House chamber and introduce a president for their speeches. She has sat there for several addresses by Presidents George W. Bush, Barack Obama and Donald Trump.

Women's advocates said seeing Harris and Pelosi seated together behind Biden will be a "beautiful moment." But they noted that electing a woman to sit in the Oval Office remains to be achieved, along with the addition of an equal rights amendment to the Constitution.

Biden helped usher the moment along by pledging to pick a woman for his running mate and selecting Harris, then a U.S. senator from California.

"This is a great start and we have to continue to move forward to give women their equal due," said Christian Nunes, president of the National Organization for Women. 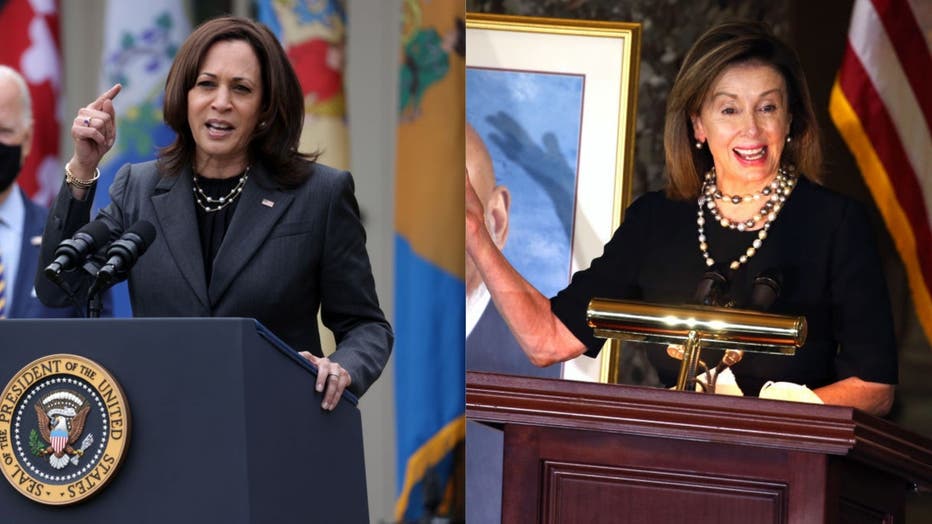 RELATED: Biden address to Congress: What time, how to watch and what he’ll say

Pelosi made history by becoming the first female House speaker during Republican Bush's presidency. He acknowledged the moment by noting during his address to Congress after Pelosi's election that he had the privilege of being the first president to open with the words "madam speaker."

Pelosi, 81, reclaimed the powerful leadership post during Republican Trump's presidency and sat behind him during his final two speeches to Congress, famously ripping up her copy of Trump's remarks in 2020 as cameras continued to roll after he was finished addressing lawmakers.

Harris, 56, made history last year when she became the first woman and first Black and Indian American person elected vice president. In her role as president of the Senate, she joins Pelosi to preside over the joint session of Congress.

Debbie Walsh, director of the Center for American Women and Politics at Rutgers University, said Wednesday night will show men, women, boys and girls that women can attain and hold high-level positions and that they are as entitled to them as men are.

Walsh also noted Biden's promise to put a woman on his ticket, and pointed as well to the diversity of his Cabinet. She said Biden was likely to begin the speech by turning around to face Pelosi and Harris and feeling proud — not just personally, "but I also think proud for the country and proud for his party and I think he will clearly see the historic implications of this and the role that he played in making that happen."

"For all of us who care about women’s public leadership, we still look forward to the day when the person standing at the podium, in front, is a woman," Walsh added. "But for now this is a particularly gratifying moment."

Harris' office declined comment Wednesday on her historic role in the president's address, preferring to let the moment speak for itself.

Apart from the speech Wednesday, Harris and Pelosi have notched another first in U.S. and women's history. They are first and second, respectively, in the line of presidential succession.