Former President Donald Trump’s new media company is already dealing with its first scandals, and it hasn’t even officially launched yet.

Nine months after being expelled from social media for his role in inciting the Jan. 6 Capitol insurrection, Trump said Wednesday he's launching a new media company with its own social media platform, called TRUTH Social, which will fall under the umbrella of Trump's newly minted company, Trump Media & Technology Group.

"We live in a world where the Taliban has a huge presence on Twitter, yet your favorite American President has been silenced," he said in a statement. "This is unacceptable."

But shortly after the announcement, hackers from the group Anonymous said they found a back way into a beta version of TRUTH Social and began creating accounts.

Aubrey Cottle, who goes by Kirtaner and is a founding member of Anonymous, said he got into the app after finding a listing on Apple’s app store for the mobile version.

"That contained a few clues that allowed us to track down this BETA version, which was live, active, and we had some fun," Cottle said.

Cottle shared a sign-up link on his Twitter page Wednesday night, which he said led to an influx of people. He said members created parody accounts for figures like Twitter CEO Jack Dorsey, Ron Watkins, Steve Bannon and Trump himself.

"It took about two hours for them to realize something was going on," Cottle said. "They initially reacted by banning all of these parody accounts that were being created, and shortly after they pulled everything offline."

Anonymous has been focus on its push against racism, neo-nazism and hate speech, Cottle said of his reading behind the hack.

"But other than that, this was just a whole bunch of fun and chaos," he said. "The opportunity presented itself," Cottle said.

Cottle didn’t find the platform’s security to be much of a challenge, saying vulnerabilities could be found by simply looking up the source code. 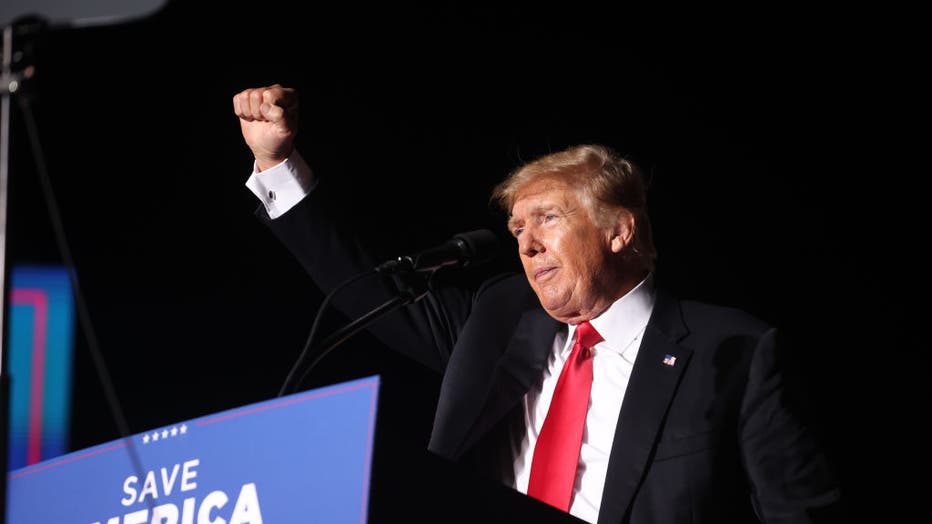 Former President Donald Trump speaks to supporters during a rally at the Iowa State Fairgrounds on Oct. 9, 2021, in Des Moines, Iowa.

Representatives for Trump have not yet responded to a request for comment and had not publicly confirmed the reported hack.

Mastodon, meanwhile, said it is considering its legal options regarding TRUTH Social. Founder Eugen Rochko told FOX Television Stations that Trump’s platform appeared to make surface-level alterations — like replacing the Mastodon logo with the TRUTH Social logo or renaming "posts" as "links." But he said TRUTH Social still "uses Mastodon under the hood."

"Whether the code has been modified or not plays no role in application of the AGPLv3 license however, the deciding factor is whether TRUTH Social publishes its copy of Mastodon source code and modifications to it as required by the license," Rochko said.

TRUTH Social is planning a soft launch in November before rolling out nationwide next year.

TMTG has not set its sights low. In addition to the Truth Social app, which is expected to soft-launch next month with a nationwide rollout early next year, the company says it is planning a video-on-demand service dubbed TMTG+ that will feature entertainment programming, news and podcasts.

One slide in a TMTG presentation on its website includes a graphic of TMTG’s potential competitors, which range from Facebook and Twitter to Netflix and Disney+ to CNN. The same slide suggests that over the long term TMTG will also become a power in cloud computing and payments and suggests it will go head-to-head with Amazon, Microsoft, Google and Stripe.

The same graphics also feature a user named Jack's Beard, who in one image fumes when an employee pushes back on an order to delete a user and its posts, calling it "kinda an overreach." The Jack's Beard account uses the handle @jack, which is Jack Dorsey's handle on the real Twitter; Dorsey's long scraggly beard has also drawn attention during the his congressional appearances over Zoom.

Truth Social's terms of service, meanwhile, bar users from annoying any of the site's employees and from statements that "disparage, tarnish, or otherwise harm, in our opinion, us and/or the Site." It was not immediately clear who the "us" in that statement refers to.

In a release, the new venture announced it had been created through a merger with Digital World Acquisition Corp., and said it seeks to become a publicly listed company.

DWA, based in Miami, is a special-purpose acquisition company, or SPAC. Such publicly traded companies are designed to list the shares of a private company more quickly than a traditional initial public offering. In practice, that means the SPAC acquires a private firm and then changes its name and other details to those of the acquired firm.

SPACs pay for their acquisitions with cash provided by investors who bought into the SPAC’s initial public offering. DWA's Sept. 8 IPO raised $287.5 million, according to a filing with the Securities and Exchange Commission.

DWA said it has raised roughly $293 million in cash, which it will use to grow TMTG’s ventures. Among the company’s biggest shareholders are several institutional investors, including Lighthouse Investment Partners, D. E. Shaw & Co., and Radcliffe Capital Management, according to an SEC filing. DWA said more details about the deal will be disclosed in upcoming filings.