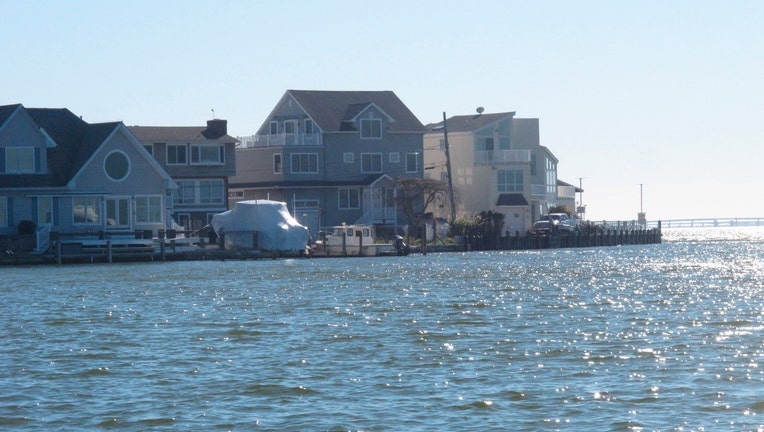 This Oct. 21, 2021, photo shows houses built at the edge of Barnegat Bay in Toms River, N.J. On Tuesday, Oct. 26, 2021, a collection of governments, academics and scientists unveiled a far-reaching plan to improve the health of the bay, which one res

NEW JERSEY - Governments, academics and scientists are proposing an ambitious effort to improve the health of Barnegat Bay, the fragile New Jersey waterway that "has been loved to death."

The Barnegat Bay Partnership, a constellation of groups dedicated to helping the bay, on Tuesday unveiled a detailed and far-reaching plan to improve water quality, increase the number of days that bay beaches are open for swimming, increase the amount of shellfish, and address an explosion of jellyfish in the bay that are making parts of it difficult to use.

Officials from federal, state and local governments signed the pledge, but it remains to be seen what, if any, specific actions will be taken in furtherance of those goals. Many groups say they will begin or continue projects aimed at improving the overall health of the bay.

"The Barnegat Bay in its current state is a jewel of the Jersey Shore, but it has some serious problems," said Stan Hales, director of the partnership. "The bay has been loved to death."

Environmentalists and government officials have long recognized threats to Barnegat Bay, including rampant development along its shorelines and interior watershed areas, and the resulting flow of pesticides and nitrogen from lawn fertilizer and agricultural uses that makes its way into the bay.

That helps contribute to decreased oxygen levels, which harms fish, shellfish and plant life, and which can turbocharge jellyfish populations, which thrive in degraded water.

In 2010, New Jersey adopted a 10-point plan to help the bay, including setting the nation's toughest limits on the amount of nitrogen that can be sold in fertilizer.

But it still has not adopted a central goal of scientists and environmentalists: setting daily limits on the amount of pollutants that can be allowed to make their way into the bay.

Shawn LaTourette, the state's environmental protection commissioner, said his department supports the plan, and is planning future regulatory changes that should help meet its goals.

"Our state is ground zero for climate impacts, including rising sea levels, more intense and frequent storm events and flooding, and increasing temperature," he said. He praised the plan's focus on "a holistic watershed approach, storm water management solutions, nature-based engineering to promote resiliency, and education and outreach programs focused on water quality and watershed health."

The plan announced Tuesday has specific goals including increasing the area of shellfish beds open for harvesting by at least 5%; maintaining nearly 13,000 acres of submerged aquatic vegetation; maintaining at least 21,000 acres of tidal wetlands and restoring additional areas through nature-based strategies; and restoring the hard clam population to levels last seen from 1985 to 1987: about 370 million. The most recent estimate, from a decade ago, was 224 million.

"The bay is everyone's responsibility, not just the EPA or the DEP of local towns," Hales said.NJ's