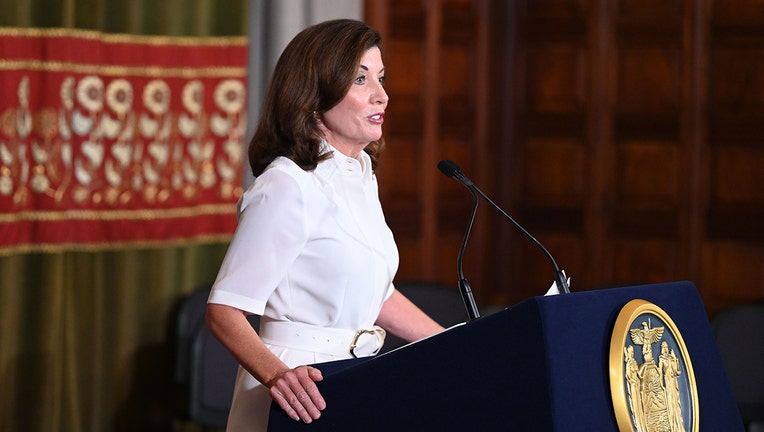 This comes as her campaign announces that she has a huge war chest after raising $21.6 million since mid-August.  Hochul has $21.3 million in cash on hand for the campaign.

Hochul leads by more than 30 points in a hypothetical matchup against former Mayor Bill de Blasio, Public Advocate Jumaane Williams, and Rep. Tom Suozzi. Right now, all four candidates have filed to run for governor but de Blasio still has not yet confirmed that he will be running saying he is "very seriously" considering it. But de Blasio's favorability among New York voters is low, with only 42% of polled voters viewing him favorably and 45% viewing him unfavorably.

A few hours after the poll was released, de Blasio announced he would not run for governor.

Hochul's favorability, on the other hand, is the highest it has been since she took office, now at 45%. She also saw a jump of 10 percentage points from a December poll now that state Attorney General Letitia James announced she is no longer running for governor. James dropped out of the race in December and said she will be running for reelection as attorney general.

"James is out of the race. Williams and Suozzi are unknown to half of Democrats. A potential opponent, de Blasio, is viewed unfavorably by more Democrats than view him favorably," Siena College pollster Steven Greenberg said. "With 22 weeks until the primary, it appears Hochul is in the catbird seat to be the Democratic nominee for governor."

Hochul drew 46% support from Democrats, de Blasio secured 12%, Williams had 11% and Suozzi had 6% support, according to the Siena poll. Also, 24% said they were unsure or named another candidate.

Given Hochul's lead and campaign war chest, Greenberg said that Hochul is in a prime spot to clinch the Democratic nomination for governor in June.

"Hochul leads big in New York City and the downstate suburbs and has an enormous lead, 65% support, upstate," Greenberg said. "In fact, she leads with every demographic group, except Black voters."

When it comes to Hochul's proposal to ban virtually all outside income for governor, lieutenant governor, state comptroller, and attorney general, 64% of voters polled say they support this while 22% oppose.

Surprisingly, permanently legalizing the sale of to-go drinks by bars and restaurants received only 55% support among polled voters and 34% say they are against.

"Five of the proposals — help those currently and formerly incarcerated with job skills and employment, implementing term limits for the statewide offices, providing wages and bonuses for healthcare workers, adding an Equal Rights Amendment to the state Constitution, and banning most outside income for statewide elected officials — have strong bipartisan support," Greenberg said.

However, when it comes to if Hochul will make progress in achieving her goals, such as enhancing New Yorkers' trust in their state government and making communities safer from crime, voters are not entirely convinced.

From the Archive: Candidate for governor Jumaane Williams [Nov. 16, 2021]

New York City Public Advocate Jumaane Williams has announced that he is running for governor. He spoke to FOX 5 NY's Chris Welch about his platform.

Voters were also asked if former President Donald Trump should be required to testify in the attorney general's investigation into the Trump Organization. 81% of Democrats and 51% of independents say Trump should testify, while Republicans say no.

"By only a 47-40% margin," Greenberg said about Republicans polled. "At least 55% of voters from every region, race, gender, age group, and income level support compelling Trump to testify in the investigation."

And voters across the state seem to approve of New York City's mayor of swagger. In his first statewide poll, Mayor Eric Adams has a 41%-19% favorability rating. In New York City, it is higher, with 63% of voters approving of Adams and 20% not approving. In just upstate, he has a 20%-12% favorability.

This Siena College Poll surveyed 806 New York state registered voters from Jan. 9-13, 2022. It has an overall margin of error of plus or minus 4.0 percentage points including the design effects resulting from weighting.

The congressman from New York explains why he passed on the offer to be deputy mayor of New York City and opted to enter the crowded gubernatorial race.