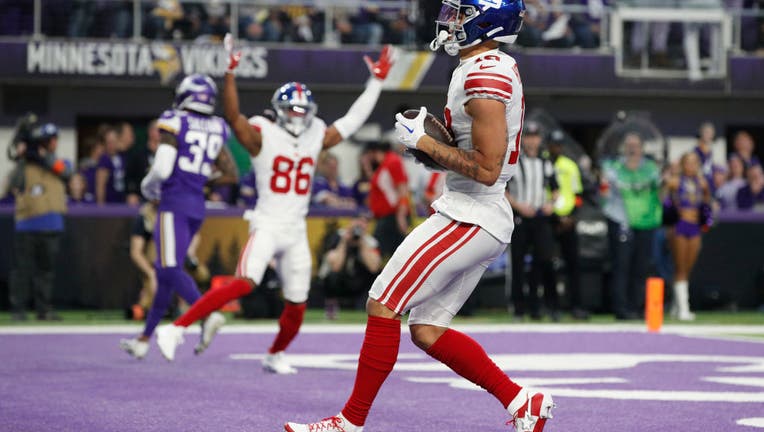 MINNEAPOLIS, MINNESOTA - JANUARY 15: Isaiah Hodgins #18 of the New York Giants catches a touchdown pass during the first quarter against the Minnesota Vikings in the NFC Wild Card playoff game at U.S. Bank Stadium on January 15, 2023 in Minneapolis,

MINNEAPOLIS - Daniel Jones passed for 301 yards and two touchdowns and ran 15 times for 79 yards in his first career playoff game for the New York Giants, a 31-24 victory over Minnesota in the wild-card round that gave the Vikings their first loss in 12 one-score games this season.

Saquon Barkley rushed for two scores, including the tiebreaker midway through the fourth quarter. The Giants' defense finished off the franchise's first playoff win since the Super Bowl 11 years ago by swarming tight end T.J. Hockenson after a 3-yard catch on a pass from Kirk Cousins at midfield on fourth-and-8. The Vikings turned the ball over on downs with 1:44 to go and no timeouts left.

Jones became the first quarterback in NFL history with 300-plus passing yards, two-plus passing touchdowns and 70-plus rushing yards in a postseason game as first-year head coach Brian Daboll's Giants advanced to play No. 1 seed and NFC East rival Philadelphia in the divisional round next weekend.

"We did what we wanted to do, come out with a win," Barkley said. "Celebrate on the way back, watch film, learn from it and get ready for Philly." 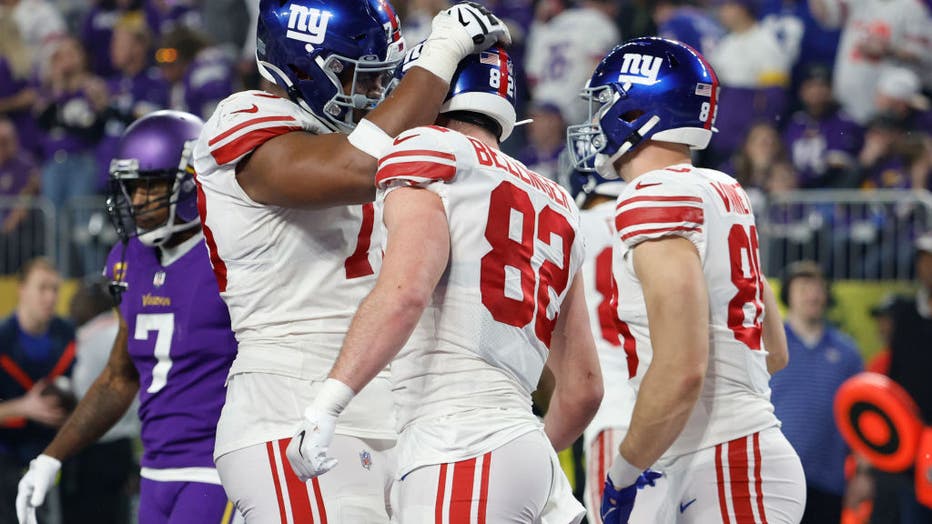 MINNEAPOLIS, MINNESOTA - JANUARY 15: Daniel Bellinger #82 of the New York Giants celebrates with teammate after scoring a touchdown during the third quarter against the Minnesota Vikings in the NFC Wild Card playoff game at U.S. Bank Stadium on Janua

Cousins went 31 for 39 for 273 yards and two scores and a rushing touchdown to cap the game's opening possession, the too-short throw to Hockenson his one glaring mistake. Justin Jefferson, the NFL's leading receiver, had only one catch after halftime and finished with 47 yards.

The Vikings stayed on brand by facing 10-point deficits late in the second quarter and again early in the third quarter.

Cousins, who delivered all kinds of on-target throws as he was knocked to the turf by the blitz-fueled Giants defense, hit Irv Smith Jr. for a short touchdown pass that brought the Vikings within three at 24-21.

Then a funny thing happened — the defense got a stop.

Danielle Hunter’s sack forced the first Giants punt, and the Vikings went the other way for the tying field goal. They left behind some crucial points, though, when Cousins ran successful sneak on fourth-and-1 at the 15 that was negated by a false start on left tackle Christian Darrisaw.

Jones converted a penalty-free fourth-and-1 sneak on the next drive for the Giants. Barkley — who had 109 total yards on only 14 touches — chugged into the end zone for the lead with 7:47 to go.

The Giants and Vikings were among seven teams in the playoffs that missed out last season, a six-year absence for the Giants that ended with their 9-7-1 finish under Daboll to grab a wild-card spot.

Vikings coach Kevin O’Connell was a first-timer on the job, too, directing a 13-4 division champion team that — in an NFL season with a record number of close margins and comeback wins — set an all-time mark by going 11-0 in one-score games.

Five years and one day after Case Keenum’s 61-yard last-play touchdown pass to Stefon Diggs gave the Vikings a 29-24 victory over New Orleans in the divisional round, Cousins finally got a postseason game in Minnesota in his fifth season with the team.

His injured right tackle Brian O’Neill led the crowd in the pregame "Skol" chant, helping crank up the decibel level. The fans went wild in the first quarter when franchise leading rusher Adrian Peterson was shown on the videoboard for an interview.

The Giants, having played here just three weeks ago, were clearly unfazed by the noise. They cruised for 166 yards on their first nine plays for touchdowns on their first two drives, then gained 90 yards in a whopping 20 plays for a field goal and a 17-7 lead.

Jones took advantage of the typically deep drops by Vikings linebackers into their coverages to run free when he didn’t see anyone open. Usually he did, with Hodgins and Slayton especially successful at working the spaces in the zone in the middle of the field.

The Vikings punted twice, both on what-could-have-been drives in the first half.

On third-and-1 at their own 34, O’Connell called a trick play that resulted in a 2-yard loss on a throwback pass from Jefferson to Cousins. Then on second-and-3 at their own 47, a wide-open Smith dropped a short throw to the sideline before another incompletion.

Giants: OLB Azeez Ojulari (quadriceps) was hurt in the second quarter and ruled out at halftime. ... Backup FS Jason Pinnock left on a cart after covering a kickoff in the fourth quarter. ... CB Adoree’ Jackson (knee) returned from a seven-game absence and played a big role in keeping Jefferson quiet after he had 133 yards and a touchdown on 12 catches against the Giants last month.