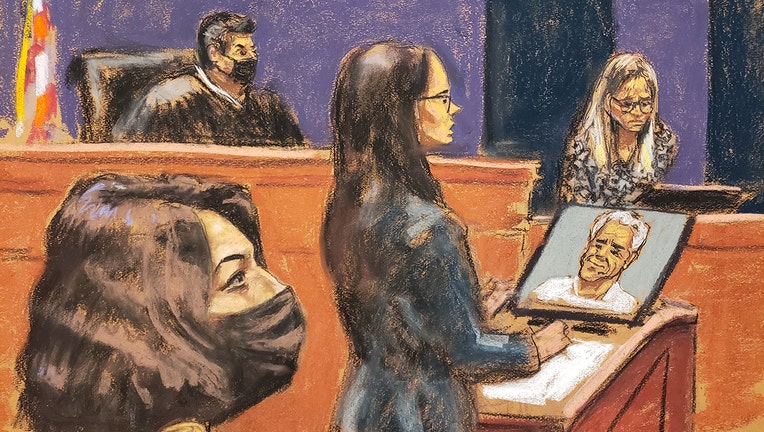 NEW YORK (AP) - Another key accuser at the sex-abuse trial of Ghislaine Maxwell testified Friday that Maxwell and Jeffrey Epstein forced themselves on her during a 1996 visit to the financier's sprawling New Mexico ranch when she was just 16.

Annie Farmer told jurors she accepted an invitation to the ranch hoping that Maxwell and Epstein wanted to help her with academic endeavors. Instead, she said, Maxwell ended up fondling her breasts and Epstein climbed into bed without her permission.

Farmer recalled the unwanted physical contact making her feel like she "just wanted the weekend to be over. … I wanted to be done with it."

She added: "All these experiences made me feel like they had a very different interest in me."

Asked by a prosecutor at the start of her testimony if she saw anyone in the courtroom who had ever given her a massage, Farmer identified Maxwell, who was sitting at the defense table.

Farmer, now 42, took the stand using her true identity — a departure from the decision by three other accusers with similar stories who testified under pseudonyms or first names only to protect their privacy.

RELATED: Who is the real Ghislaine Maxwell: Epstein enabler or pawn?

The three others claimed Maxwell recruited them to give Epstein massages meant as a ruse for sexually abusing teens. Two said they were just 14 when the abuse started and that Maxwell sometimes participated in the encounters.

Maxwell, 59, has denied charges she groomed underage girls for Epstein, who killed himself in jail in 2019. Her lawyers say the government is making her a scapegoat for alleged sex crimes committed by her onetime boyfriend.

Farmer testified Friday that she met Epstein at age 16 on a 1996 trip to New York City to visit her older sister, who was working for him at his Manhattan mansion. When they visited him at the home, he "seemed very friendly and down to earth," and even offered to mentor her, she said.

She said an outing to the movies with Epstein, he reached over to hold her hand and caress her leg.

"I felt sick to my stomach," she said. "It was not something I wasn't expecting at all."

When Farmer returned home, she stayed in touch with the billionaire and accepted an invitation to travel to New Mexico with a plane ticket he paid for even though, she said, "after what happened in the movie theater, I didn't want to be alone with him."

She said initially felt more comfortable because Maxwell was there. But when they took her to the movies, he "right away began to hold my hand" and rub her foot and arm throughout the film, she said.

Once home, Maxwell insisted on giving Farmer a massage and told her to take off her clothes, Farmer testified. Maxwell "pulled down the sheet and exposed my breasts and starting rubbing on my breasts," Farmer said.

"It didn't make sense to me that would happen," she said. "I so badly wanted to get off the table and have the massage be done."

The next morning, she said, Epstein came into her bedroom and told her he wanted to cuddle. After he climbed into bed, she froze, thinking: "I just have to get through this." He pressed his body against her, she said.

She finally made up an excuse to go to the bathroom: "I wanted to be in there long enough that this situation would be over," she said.

The Associated Press does not identify people who say they were victims of sexual abuse unless they come forward publicly. Although Farmer was not identified by name in court documents, she has been outspoken in describing her experiences in interviews with ABC and The New York Times. When Maxwell sought bail, Farmer asked the judge to deny it, calling her a "psychopath."

Maxwell has been jailed since she was arrested in New Hampshire in July of the following year.

Farmer's testimony caps the trial's second week.  It's unclear whether the government will finish presenting its case Friday, as expected.

The judge has suggested that closing arguments — originally thought to span six weeks — might occur as soon as Dec. 20 if the defense presentation next week only lasts a day or two.

A third accuser in the Ghislaine Maxwell trial said she visited Jeffrey Epstein's home at least 100 times where sex acts occurred each time.