A NASA spacecraft got closer to Jupiter and its moon than ever before and captured some images.

Astronomers have discovered evidence of water vapor in the atmosphere of Jupiter’s moon Ganymede, according to a study released in the journal Nature Astronomy.

Previous research provides evidence that Ganymede, the largest moon in the solar system, contains more water than all of Earth’s oceans combined.

Temperatures on Ganymede are so cold that water on the surface remains frozen solid. Its ocean would reside 100 miles below the surface, meaning the water vapor scientists observed does not come from that body of water.

This water vapor is different, though. It forms when ice from Ganymede’s surface sublimates — turns from a solid to a gas, unlike on Earth, where water vapor occurs when a liquid is heated and becomes a gas. On Ganymede, water goes from a solid straight to a gas, skipping the liquid phase.

RELATED: NASA shares audio that represents all of the galaxies in space

The UV observations suggested the presence of molecular oxygen (O2). But, the images did not match the expected emissions from a pure O2 atmosphere. Scientists concluded that the discrepancy meant Ganymede had a higher concentration of atomic oxygen (O).

Scientists re-examined the Hubble’s observations from the last two decades to confirm its evidence of water vapor.

In 2018, Lorenz Roth of the KTH Royal Institute of Technology in Stockholm, Sweden led a team set on measuring the amount of atomic oxygen on Jupiter’s moon using the Hubble.

The team compared Hubble’s photos from 2018 to those from Space Telescope Imaging Spectrograph from 1998 to 2010. 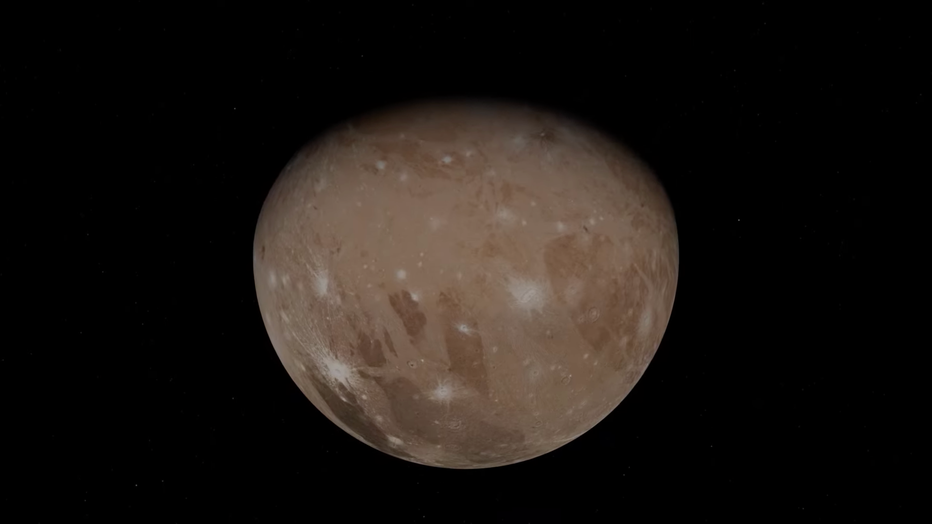 A screenshot from the new animation video shows Ganymede, the biggest moon in the solar system. (NASA/JPL-Caltech/SwRI/MSSS)

Contrary to the 1998 data, Roth and his team discovered there was hardly any atomic oxygen in Ganymede’s atmosphere, meaning there must be another explanation for the difference in UV aurora images.

The team looked closer at the UV images and concluded that Ganymede’s surface temperature extremely varies throughout the day. Around noon near its equator, the surface becomes sufficiently warm enough to release small amounts of water molecules — the water vapor the Hubble observed.

"So far only the molecular oxygen had been observed," Roth told NASA. "This is produced when charged particles erode the ice surface. The water vapor that we measured now originates from ice sublimation caused by the thermal escape of water vapor from warm icy regions."

JUICE’s launch is planned for 2022 and is expected to arrive at Jupiter in 2029. It will spend three years collecting observations of Jupiter and three of its largest moons with particular emphasis on Ganymede as a planetary body and potential habitat.

"Our results can provide the JUICE instrument teams with valuable information that may be used to refine their observation plans to optimize the use of the spacecraft," Roth said.

Ganymede was chosen for detailed investigation because it provides a natural laboratory for analysis, NASA said. The moon’s unique magnetic and plasma interactions with Jupiter and its environment make it optimal for investigation

NASA’S Juno mission recently released new photos of Ganymede. Juno has been studying Jupiter and its moons since 2016.

By studying Jupiter and its planets, scientists hope new insights will be found on the habitability of Jupiter-like exoplanetary systems.

This story was reported from Boston.