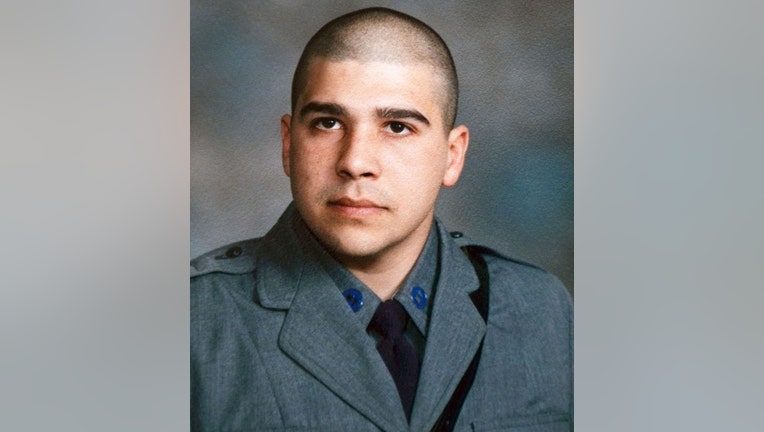 NEW YORK - A New York state trooper who died in the line of duty in the Adirondacks over the weekend will be laid to rest on Monday, the New York State Police announced.

Trooper James Monda, 45, of Schenectady County, drowned during a marine patrol on Great Sacandaga Lake on Sunday. While wearing diving gear, he went into the water at a boat launch at about 4 p.m. but never came up, Superintendent Kevin Bruen said at a press conference.

"During a short dive, Trooper Monda did not resurface. The other trooper, who is a member of our Underwater Recovery Team, our dive team, jumped in and located Trooper Monda at the bottom of the lake in approximately 9 feet of water," Bruen said.

Monda was pulled from the lake and taken to a hospital in Gloversville, where he died.

Bruen described Monda's death as accidental drowning and said that an autopsy had ruled out a medical emergency.

On Tuesday, Gov. Kathy Hochul said in a statement that she was devastated by Monda's death and had directed flags on all state buildings to be lowered to half-staff until after the funeral on Monday.

"Our Troopers serve and protect the citizens of the State and when we lose a member, we lose a piece of the community. I extend prayers and condolences from all New Yorkers to the family, fiancée and friends of Trooper Monda," Hochul said. "We will never forget his dedicated service to our safety and our State."

The visitation for Monda will be held at St. John the Evangelist Church in Schenectady on Sunday. The funeral service at the church is scheduled for Monday at 10 a.m.

Monda, an 18-year veteran of the State Police, is survived by his fiancée, mother, and father, officials said.