What are PFAS, the concerning 'forever chemicals?'

PFAS are increasingly being found unnaturally in water sources, food, and animals.

Freshwater fish caught in the nation’s lakes, rivers, and streams contain dangerously high levels of "forever chemicals," according to a study of data collected by the U.S. Environmental Protection Agency and U.S. Food and Drug Administration.

Researchers calculated that eating just one freshwater fish in a year was equal to a month of drinking water contaminated with high levels of the "forever chemical" PFOS, which stands for perfluorooctanesulfonic acid — a synthetic chemical previously used in things like food packaging, water-resistant coating, and fire-fighting foams.

Most uses of PFOS have since been voluntarily phased out by U.S. manufacturers over concerns about potential health effects, but are still in limited use and remain in the environment because they do not degrade over time, according to the EPA.

The chemicals can accumulate and remain in the human body for long periods of time, and evidence from animal and human studies indicates that exposure to PFOS may lead to cancer or other health problems.

In the most recent study, published Tuesday in the journal Environmental Research, researchers found that PFAS in freshwater fish were 280 times greater than forever chemicals detected in some commercially caught and sold fish.

The forever chemical found at greatest concentrations in freshwater fish was PFOS, formerly an ingredient in 3M’s Scotchgard. Roughly three-quarters of the detected forever chemicals were PFOS, the study said.

The data was analyzed by scientists from the Environmental Working Group, a nonprofit environmental health organization that focuses on agriculture, toxic chemicals, drinking water pollutants, and more.

"These test results are breathtaking," Scott Faber, EWG’s senior vice president for government affairs, said in a statement. "Eating one bass is equivalent to drinking PFOS-tainted water for a month." 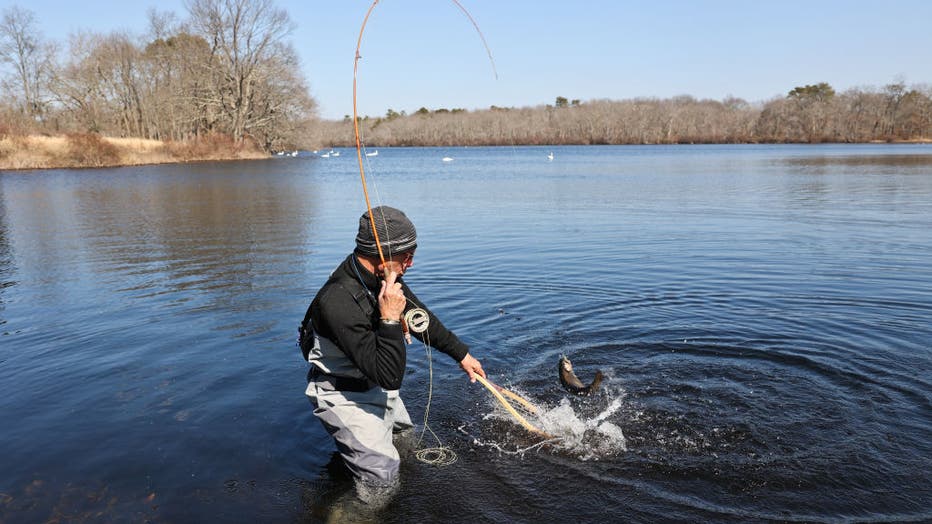 The researchers analyzed data from more than 500 samples of fish fillets collected in the U.S. between 2013 and 2015. The samples included different types of salmon, catfish, walleye, perch, and bass.

The samples were collected under monitoring programs by the EPA, the National Rivers and Streams Assessment, and the Great Lakes Human Health Fish Fillet Tissue Study.

Although forever chemicals have been in use for more than 80 years, scientific understanding and the ability to test for PFAS in food began "only recently," the FDA states. PFAS can also vary widely in their chemical properties.

Most of the research on PFAS and related health effects is based on two types: PFOS, the compound noted in the study, and perfluorooctanoate (PFOA). Last year, the EPA issued nonbinding drinking water health advisories that set health risk thresholds for PFOA and PFOS to near zero, replacing 2016 guidelines that had set them at 70 parts per trillion.

For comparison, the researchers in the study calculated that eating one freshwater fish in a year equated to ingesting water with PFOS at 48 parts per trillion, or ppt, for one month.

The researchers analyzed data from over 500 samples of fish fillets in the U.S. between 2013 and 2015. The samples included different types of salmon, catfish, walleye, perch, and bass.

The Environmental Working Group created an interactive map of the results, showing PFAS detections and the fish affected within particular states. Overall, freshwater fish caught near urban areas and the Great Lakes were found to have the highest levels of forever chemicals, according to the study.

"PFAS contaminate fish across the U.S., with higher levels in the Great Lakes and fish caught in urban areas," Tasha Stoiber, Ph.D., an EWG senior scientist and another co-author, said in a statement. "PFAS do not disappear when products are thrown or flushed away. Our research shows that the most common disposal methods may end up leading to further environmental pollution."

The nonprofit noted how such pollution is particularly problematic for communities near bodies of water, as freshwater fish offer an important source of protein and can be more affordable than commercial seafood options. It noted how the more contaminated the fish someone eats, "the greater their overall exposure to PFAS, and the greater the risk to their health." 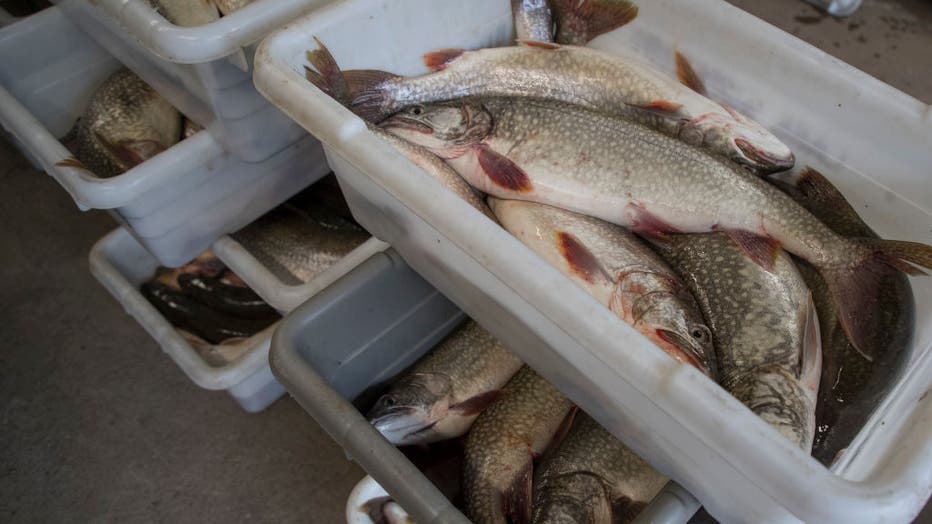 FILE - Lake trout taken from Lake Superior are pictured in a file image dated May 8, 2018, in Duluth, MN. (Photo By Jerry Holt/Star Tribune via Getty Images)

Where does the ‘forever chemical’ pollution come from?

Advocates have long urged action on PFAS, including the need to end industrial discharges of the forever chemicals.

The Environmental Working Group estimates there may be more than 40,000 industrial polluters of PFAS in the United States — including manufacturing facilities, municipal landfills, and wastewater treatment plants.

The contamination of water spreads PFAS to soil, crops, and wildlife, including fish, the group says.

Last year, the EPA moved to designate PFOS and PFOA as hazardous substances under the so-called Superfund law. It doesn’t ban the chemicals, but it requires that releases of PFOA and PFOS into soil or water be reported to federal, state, or tribal officials if they meet or exceed certain levels.

The EPA can then require cleanups to protect public health and recover cleanup costs.

"Communities have suffered far too long from exposure to these forever chemicals,″ EPA Administrator Michael Regan said in August 2022. "The action announced today will improve transparency and advance EPA’s aggressive efforts to confront this pollution." 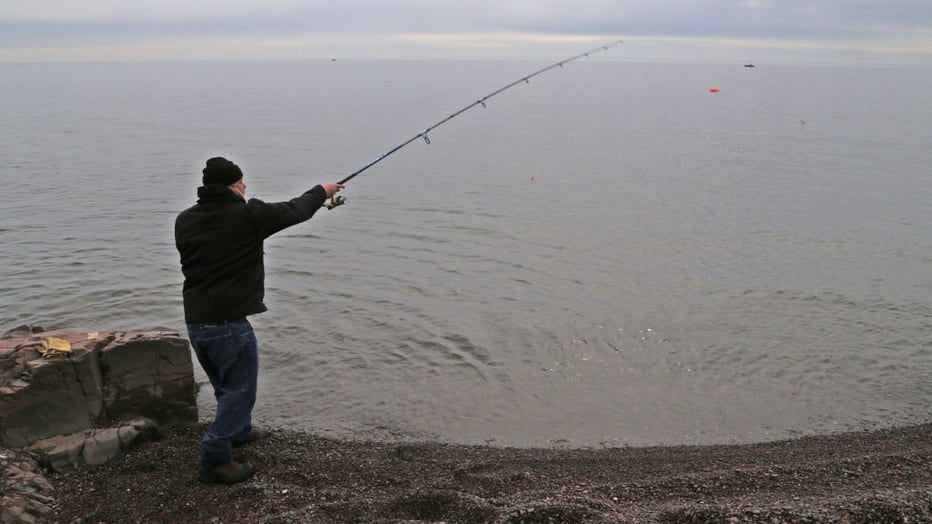 FILE - A Lake Superior shore fisherman cast his bait along the North Shore.(Photo By Dennis Anderson/Star Tribune via Getty Images)

The EPA’s action followed a report by the National Academies of Science that called PFAS a serious public health threat in the U.S. and worldwide. It also came after an EPA announcement in June that revealed PFOA and PFOS are more dangerous than previously thought and pose health risks even at levels so low they cannot currently be detected.

The EPA did not immediately respond to a request for comment on the EWG’s study.

"The EPA needs to move swiftly to set regulations for the industries most likely to be dumping PFAS into the environment," Faber said. "Downstream communities especially have suffered the consequences of unregulated PFAS discharges for far too long."