France’s Remi Ouvrard is seen in a video recorded on Nov. 10, 2021, while standing on top of a hot air balloon thousands of feet in the air. Credit - Remi Ouvrard via Storyful

CHATELLERAULT, France - The sky is the limit for a daredevil in France, who broke a world record for standing on top of a hot air balloon at more than 13,000 feet — or nearly 2.5 miles — up in the air and helped to raise money for a charity in the process.

Remi Ouvrard, 28, shared a video of himself on Wednesday while at 3,637 meters (11,932 feet) above ground, an altitude that represents the phone number of France’s annual charity campaign Telethon, 36-37, aimed at raising money for rare neuromuscular diseases.

"Symbolically, we thought that it would have been great to reach at least this altitude," Ouvrard told local reporters, according to an English translation.

But the balloon soared even higher, reaching a peak altitude of 4,016 meters (13,175 feet) over Chatellerault in western France, the Agence France-Presse reported. The daring ride shattered Ouvrard’s previous world record of 1,217 meters (3,992 feet) above sea level in 2020, according to the news agency. 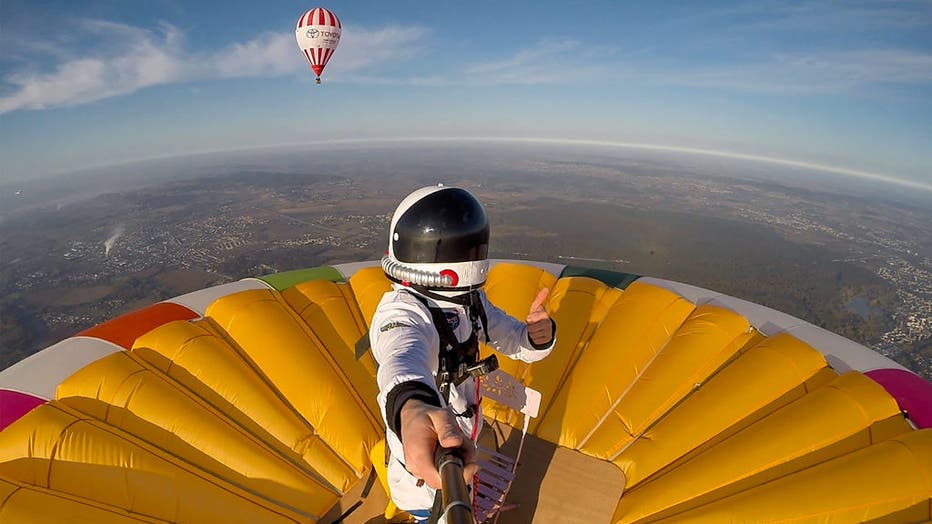 This selfie picture taken on Nov. 10, 2021, shows French balloonist Remi Ouvrard attempting to set a world record by standing on the top of a hot air balloon for the Telethon at an altitude of over 3637 meters, in Chatellerault, western France. (Phot

"Perfect conditions to make this flight this morning," he told local reporters, per an English translation.

The balloon was being operated by Ouvrard’s father and the trip lasted almost 90 minutes, according to local news outlets.

The Grand Chatellerault Twitter account also shared a video showing the balloon — and Ouvrard — soaring over Chatellerault in the Nouvelle-Aquitaine region of the country.

France’s Remi Ouvrard claimed a new world record on Nov. 10, 2021, by standing on top of a hot-air balloon 13,175 feet up in the sky over Chatellerault. Credit - Grand Chatellerault via Storyful