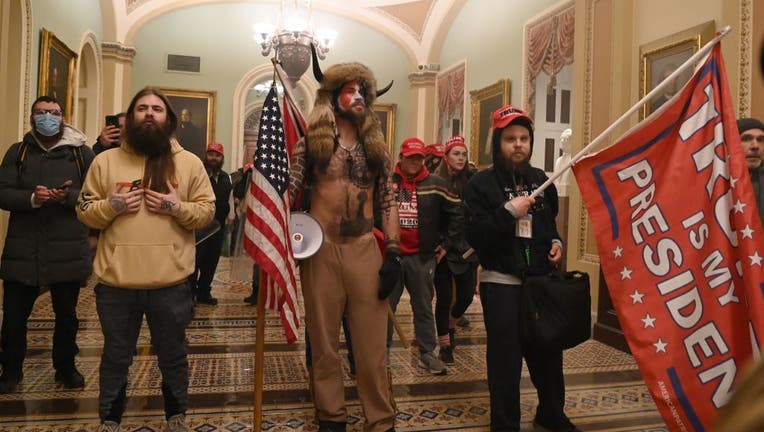 FILE - Supporters of US President Donald Trump, including member of the QAnon conspiracy group Jake Angeli, aka Yellowstone Wolf (C), enter the US Capitol on January 6, 2021, in Washington, DC.

WASHINGTON - Federal prosecutors on Saturday announced the arrests of three high-profile rioters in the U.S. Capitol this week, including the "QAnon Shaman" and a West Virginia lawmaker.

Prosecutors say 36-year-old Johnson was charged with one count of knowingly entering or remaining in any restricted building or grounds without lawful authority; one count of theft of government property; and one count of violent entry and disorderly conduct on Capitol grounds.

Johnson was photographed walking through the Capitol with House Speaker Nancy Pelosi's lectern.

Jacob Anthony Chansley, The so-called "QAnon Shaman," of Arizona is charged with knowingly entering or remaining in any restricted building or grounds without lawful authority, and with violent entry and disorderly conduct on Capitol grounds.

Angeli distinguished himself from other insurgents in the Capitol by wearing face paint, a bearskin headdress and no shirt. He also carried a six-foot-long spear with an American flag tied below the blade.

West Virginia Delegate Derrick Evans, 35, was charged with one count of knowingly entering or remaining in any restricted building or grounds without lawful authority; and one count of violent entry and disorderly conduct on Capitol Grounds.

The recently elected Evans streamed live to his Facebook page a video of himself joining and encouraging a crowd unlawfully entering the U.S. Capitol. In the video, Evans is allegedly seen crossing the threshold of the doorway into the U.S. Capitol and shouting, "We’re in, we’re in! Derrick Evans is in the Capitol!"

The cases are being prosecuted by the U.S. Attorney’s Office for the District of Columbia and investigated by the FBI’s Washington Field Office and the United States Capitol Police.

Federal authorities continue to search for the suspect who planted pipe bombs throughout the District on Wednesday, as well as other rioters.

Anyone with information is asked to call 1-888-ATF-TIPS (1-888-283-8477), email ATFTips@atf.gov or submit information anonymously via ReportIt.com.