WASHINGTON - The U.S. Food and Drug Administration on Thursday announced it will once again try to ban menthol cigarettes, as well as all flavored cigars — adding that it aims to introduce the regulations in the coming year.

The FDA has attempted several times to get rid of menthol but faced pushback from the tobacco industry, members of Congress and competing political interests in both the Obama and Trump administrations. Any menthol ban would take years to implement and will likely face legal challenges from tobacco companies.

"Banning menthol—the last allowable flavor—in cigarettes and banning all flavors in cigars will help save lives, particularly among those disproportionately affected by these deadly products," acting FDA Commissioner Janet Woodcock, M.D., said in a statement.

"With these actions, the FDA will help significantly reduce youth initiation, increase the chances of smoking cessation among current smokers, and address health disparities experienced by communities of color, low-income populations, and LGBTQ+ individuals, all of whom are far more likely to use these tobacco products," Woodcock added. 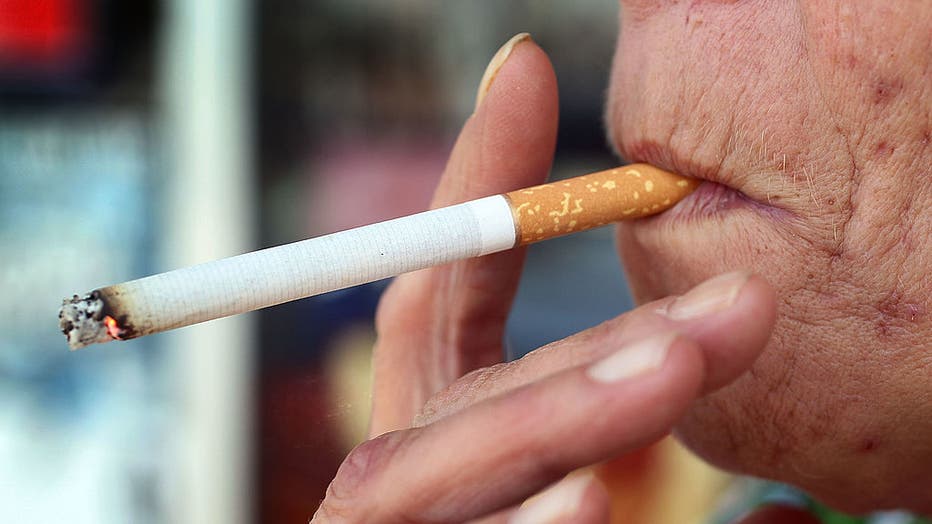 FILE - A woman smokes a menthol cigarette in front of a Quick Stop store on March 30, 2010 in Miami, Florida. (Photo by Joe Raedle/Getty Images)

Menthol is the only cigarette flavor that was not banned under the 2009 law that gave the FDA authority over tobacco products, an exemption negotiated by industry lobbyists. The act did, though, instruct the agency to continue to weigh banning menthol.

Menthol occurs naturally in mint plants. Known for its cooling effect, the chemical is used in cough drops and other medicines. Cigarette makers began adding the chemical in the 1920s after realizing it reduced the throat hit of cigarettes.

The flavor’s persistence has infuriated anti-smoking advocates, who point to research that menthol’s numbing effect masks the harshness of smoking, likely making it easier to start and harder to quit. The mint-flavored cigarettes are overwhelmingly used by young people and minorities, particularly Black smokers, 85% of whom smoke menthols. That compares to about a third of white smokers.

"There was a specific, intentional focus on creating the next generation of smokers by making menthol cigarettes available in those communities," said Dr. Nia Heard-Garris, who chairs the American Academy of Pediatrics’ group on minority health and equity.

Thursday’s announcement is the result of a lawsuit filed by anti-smoking and medical groups last summer to force the FDA to finally make a decision on menthol, alleging that regulators had "unreasonably delayed" responding to a 2013 petition seeking to ban the flavor. The deadline for the agency’s response was Thursday.

The action would also ban menthol and fruity flavors from low-cost cigars, which are increasingly popular with young people, especially Black teens.

About a third of all cigarettes sold in the U.S. are menthol and its elimination would be a huge blow to tobacco companies, including Altria and Reynolds American, maker of the leading menthol brands, Newport and Kool. With the slow decline of smoking, tobacco companies have been diversifying into alternative products, including electronic cigarettes and tobacco pouches. But those ventures still account for a tiny slice of industry sales.

An Altria spokesman said in a statement to the Associated Press ahead of the announcement that "criminalizing menthol" would have "serious unintended consequences." Reynolds American did not immediately respond to requests for comment.

Smoking can cause cancer, strokes and heart attacks. According to the Centers for Disease Control and Prevention, cigarette smoking is responsible for more than 480,000 deaths each year in the U.S., including more than 41,000 deaths resulting from secondhand smoke exposure.

The agency said that figure breaks down to about one in five deaths annually, or 1,300 deaths each day. On average, smokers die 10 years earlier than non-smokers, according to the CDC.

About 14% of Americans smoke cigarettes, with rates roughly even between white and Black populations. But Black smokers are less likely to successfully quit, a trend that the U.S. Surgeon General and others have attributed to menthol cigarettes.

"Banning menthol cigarettes will be a life-saving change," Harold Wimmer, president of the American Lung Association, wrote on Twitter. "The American @LungAssociation has been working for years on this important public health effort to help smokers quit and prevent our youth from starting."

The FDA's attempts to get rid of menthol have repeatedly been delayed or derailed by forces inside and outside the government.

In 2011, an outside panel of FDA advisers recommended banning menthol after concluding that it increases smoking among young people and minorities and makes it harder for them to quit. But cigarette makers challenged the findings in court, claiming some panel members had conflicts of interest they hadn't disclosed.

In 2013, the FDA conducted its own internal study and reached similar conclusions, but the Obama administration did not move ahead with a ban.

Under the Trump administration, FDA Commissioner Scott Gottlieb tried to again restart the process but it was never greenlighted by the White House.