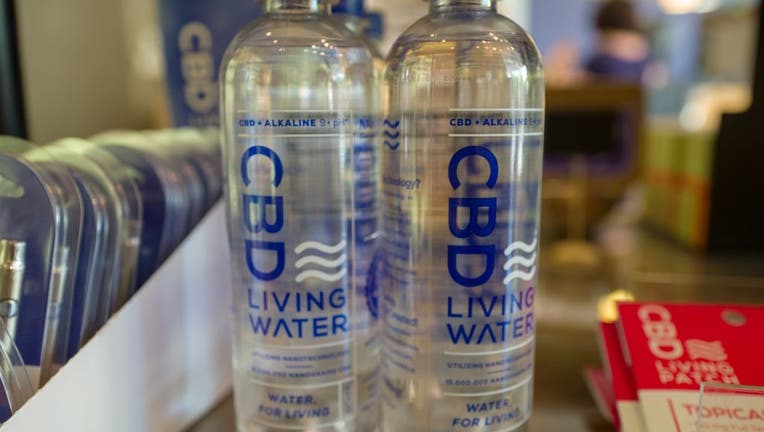 Water with nano-particles of Cannabidiol or CBD, derived from the Cannabis plant, are displayed on the shelf of a store in Walnut Creek, California, April 26, 2019. (Photo by Smith Collection/Gado/Getty Images)

The Food and Drug Administration (FDA) is reportedly planning to announce a regulatory framework for products like CBD that are derived from legal cannabis in the coming months amid concerns about product quality and safety.

CBD products have proliferated in the years since the enactment of the 2018 farm bill legalized industrial hemp – a variant of the cannabis plant that lacks the intoxicating properties of versions grown for consumption as medical or recreational marijuana. That opened the door for sales of CBD products ranging from drinks and edible gummies to creams and lotions that contain no more than 0.3% THC, which is the cannabinoid chemical that can induce a high in users and is illegal at the federal level despite legalization in 21 states.

When asked for comment about the upcoming regulatory plan, a spokesperson for the FDA provided Fox Business with a statement by FDA Principal Deputy Commissioner Janet Woodcock, M.D., who is in charge of the agency's efforts to regulate cannabis, that was also given to the Wall Street Journal: "Given what we know about the safety of CBD so far, it raises concerns for FDA about whether these existing regulatory pathways for food and dietary supplements are appropriate for this substance. FDA is currently reviewing three Citizen petitions related to this, and we plan to respond to them soon."

RELATED: Marijuana laws by state in 2022

CBD products are often touted as helping relieve pain, reduce anxiety and promote sleep but can't currently be branded as dietary supplements or added to food products under FDA rules, and the agency has issued warning letters to several companies about claims they've made regarding their CBD products.

The FDA is researching the effects of CBD in conjunction with the National Institutes of Health (NIH), and those findings will inform its recommendations about regulations for those products. A study by NIH found that a pharmaceutical-grade CBD product known as Epidiolex has helped reduce seizures in patients with epilepsy over the age of 2, but it also caused diarrhea, fatigue and elevated liver enzymes in some children.

Once the FDA is ready to move forward with making regulatory recommendations, it will have to decide whether CBD products can be regulated as food or dietary supplements, rather than drugs, or if the agency will need to develop a new framework or call upon Congress to enact a law on the subject.

Because cannabis plants contain dozens of cannabinoid chemicals, including THC and CBD, among others, new cannabis products that emphasize newly discovered cannabinoids present a challenge for regulators.

Ten students were treated for a possible overdose at a middle school in the San Fernando Valley, according to investigators. FOX 11 LA's Gigi Graciette spoke live from the scene with LiveNOW from FOX's Josh Breslow.

For example, the most prevalent form of THC is known as Delta-9, which has intoxicating properties and is illegal at the federal level. But Delta-8 THC can be derived from industrial hemp and falls into a legal gray area where it can be legally produced and marketed despite having intoxicating properties like its sister cannabinoid.

Norman Birenbaum, an FDA senior adviser who previously worked on cannabis regulation in New York and Rhode Island, told the Wall Street Journal that the agency has "growing and more intensifying short-term concerns" about these Delta-8 products after a child in Virginia died after eating Delta-8 gummies while a number of other teens and children were sickened in Texas and Iowa.

The lack of a federal regulatory framework has given rise to concerns about consumer safety and shortcomings in quality assurance that may lead to THC being included in some CBD products meant to exclude it. It has also kept a number of companies that eventually plan to enter this emerging market on the sidelines due to legal concerns. Despite that hesitance, an FDA report from 2021 found that the CBD market alone was estimated to be $4.6 billion last year and forecasted it to quadruple by 2026.

As the FDA's regulatory process plays out, the U.S. Department of Agriculture's regulations on hemp production illustrate the challenges of fine-tuning rules around the production and processing of cannabis products.

A Congressional Research Service report found that in 2021, hemp production was valued at $824 million across roughly 13,000 grower licenses around the country, and a dozen states had more than 1,000 harvested acres of hemp in 2021 – led by Montana with 4,500 acres and Colorado with 3,100 acres. But the CRS report noted that about 20% of hemp grown in a given year will exceed the legal limit of no more than 0.3% THC, which goes to show the "inherent risks to farmers of growing hemp within USDA's regulatory framework."

GET UPDATES ON THIS STORY AT FOXBUSINESS.COM