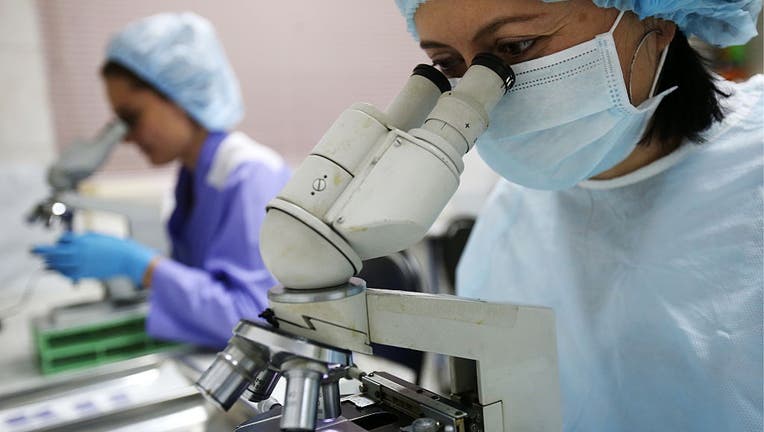 KAZAN, RUSSIA - NOVEMBER 8, 2016: Technicians use microscopes at a laboratory at the Republic of Tatarstan Centre for Prevention and Control of AIDS and Infectious Diseases. Yegor Aleyev/TASS (Photo by Yegor AleyevTASS via Getty Images)

WASHINGTON - The U.S. Food and Drug Administration took a major step in the fight to end the HIV epidemic with the approval of the first injectable HIV prevention drug called Apretude.

Apretude offers an option to prevent HIV that does not involve taking a daily pill. According to the FDA, Apretude is given first to individuals as two injections allocated a month apart and then every two months after.

The drug is approved for use in at-risk adults and children weighing at least 77 pounds for pre-exposure prophylaxis (PrEP) to lower the risk of sexually transmitted HIV, according to the FDA.

Patients can begin their treatment with Apretude or they can take another drug called Vocabria for four weeks to evaluate how well their body can handle Apretude.

Trials were conducted by the FDA to determine the safety and efficacy of Apretude comparing it to Truvada, a once daily oral medication for HIV PrEP.

The first trial included HIV uninfected men and transgender women who have sex with men and have high-risk behavior for HIV infection. A second trial involved uninfected cisgender women at risk of getting HIV.

Cisgender describes a person whose gender identity matches the sex the person had or was identified as having at birth.

Side effects common in patients who took Apretude during the trials included injection site reactions, headache, fever, fatigue, back pain, and a rash.

The FDA said Apretude has a "boxed warning" to not use it unless a negative HIV test is confirmed. The drug can only be prescribed to people confirmed to be HIV negative immediately before starting use of the drug and prior to each injection to minimize the risk of resistance to the drug.

In April, a potential HIV vaccine, using mRNA COVID-19 vaccine technology, was used in a clinical trial that occurred in Washington, D.C. and Seattle involving 48 healthy adults as participants.

Researchers at the International AIDS Vaccine Initiative and Scripps Research said the vaccine had success in producing rare immune cells that trigger antibodies to keep the virus from mutating. The response was shown in 97% of participants who received the vaccine.

According to the U.S. Centers for Disease Control and Prevention, HIV, or human immunodeficiency virus, is a virus that attacks the body’s immune system. It can be transmitted through unprotected sex or other ways including sharing injected equipment, like syringes. The virus is detected through a test.