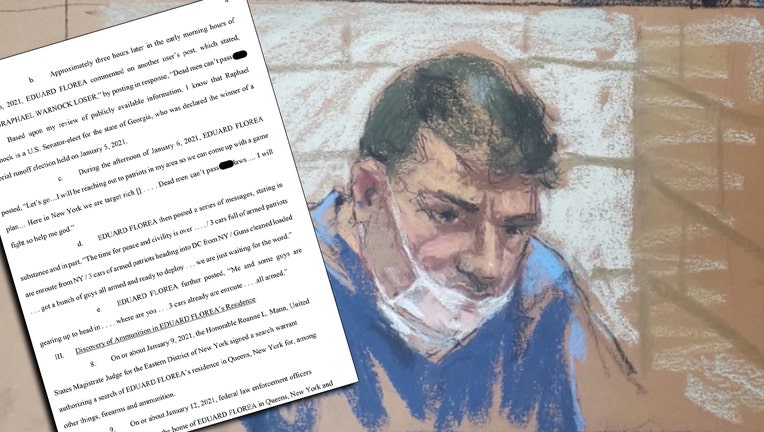 Eduard Florea, 40, was charged with possessing ammunition as a convicted felon and denied bail after the FBI searched his Middle Village, Queens, home and interviewed him about a series of threats about the deadly siege on the U.S. Capitol they said he made on the social network Parler.

Prosecutors said the software engineer vowed to travel to the nation's capital and slice "a throat" at the Jan. 6 riot by supporters of President Donald Trump. Another post attributed to Florea threatened the life of U.S. Sen.-elect Raphael Warnock of Georgia, authorities said.

"The time for peace and civility is over," Florea wrote, according to a criminal complaint. "I will be reaching out to patriots in my area so we can come up with a game plan."

Florea's defense attorney dismissed the online posts as "blather" and noted that Florea had no guns in his home. She said federal authorities "came to his home in a military tank" to arrest him.

"He is not charged with any action whatsoever in connection with the despicable acts that happened at the Capitol," federal public defender Mia Eisner-Grynberg said. "Mr. Florea does not condone that behavior."

He said Florea applied to join the Proud Boys, a far-right group, but was not yet a member because he had not attended the requisite number of meetings. He said Florea traveled to Washington in December and was with the group when it vandalized a church.

"This is not just rhetoric," Navarro said. "This is rhetoric backed by action."

Also on Wednesday, an employee of a New York commuter railroad was released on $10,000 bond at his initial court appearance on charges he participated in last week's mob assault on the U.S. Capitol.

A federal judge in White Plains, New York, ordered Will Pepe to be put on electronic monitoring and to surrender a shotgun and a hunting knife as part of his bail conditions pending the outcome of his federal trespassing case in Washington.

Pepe was suspended without pay from his job with the Metro-North railroad after he was photographed inside the Capitol during the unrest. MTA officials said he had called in sick to attend the protests.

Pepe's attorney did not comment on the charges. There was no allegation he was armed when he went to the protest.

William Sweeney, the head of the FBI's New York field office, said Pepe "chose to cross the bright line between the peaceful exercise of First Amendment rights and violence and destruction."

"We are continuing our investigation," Sweeney said, "and I expect more arrests in this region will follow."

The charges came a day after the son of a New York City judge was arrested by the FBI on charges he was among the protesters who stormed the U.S. Capitol. Aaron Mostofsky, 34, is accused of stealing a police vest and wearing a fur costume during the mayhem.