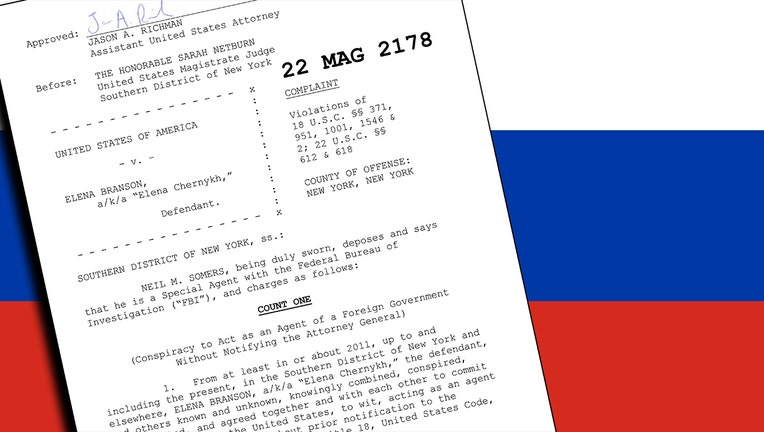 NEW YORK - A woman with Russian and U.S. citizenships who founded what prosecutors called a "Russian propaganda center" in New York City was charged Tuesday with subverting laws for the last decade that require foreign agents to register with the U.S.

The charges against Elena Branson were announced after the unsealing of a criminal complaint in Manhattan federal court.

U.S. Attorney Damian Williams said Branson, who left the country for Russia after September 2020 and remains at large, was alleged to have corresponded directly with Russian President Vladimir Putin as he carried out an aggressive propaganda campaign.

Williams said in a release that the correspondence with Putin and a high-ranking Russian minister preceded her 2012 founding of the Russian Center New York, which the prosecutor described as a "Russian propaganda center."

He said her promotional outreach, which occurred while she also served as chairperson of the Russian Community Council of the USA, included an "I Love Russia" campaign aimed at American youths.

"All the while, Branson knew she was supposed to register as an agent of the Russian government but chose not to do so and, instead, instructed others regarding how to illegally avoid the same," Williams said.

"Particularly given current global events, the need to detect and hinder attempts at foreign influence is of critical importance, and the Southern District of New York is proud to do its part in the fight against tyranny," he said.

Branson, 61, was charged with conspiring to act as an agent of a foreign government without notifying the U.S. attorney general, among other charges.

The complaint said her work on behalf of the Russian government included arranging meetings for herself and other Russian officials with U.S. government officials and executives at businesses based in the United States.

It said she even tried in April 2016 to invite then-presidential candidate Donald Trump or one of his children to a "Russia Forum New York," although the complaint said there was no sign the Trump or his children attended the meeting.

The complaint said she emailed a Trump adviser after the November 2016 presidential election to offer congratulations and try to get the president-elect to attend a World Chess Championship in Manhattan, although "there was no indication that the now-former President attended the referenced event."

At that event on Nov. 10, 2016, Branson was photographed with Putin's current press secretary, the complaint said.

In March 2016, it said, she helped arrange meetings for the head of the Department of Foreign Economic Activity and International Relations for the Government of Moscow with, among others, a then-New York state senator and the management of certain U.S. companies.

In a release, authorities said the FBI interviewed Branson on Sept. 29, 2020, and she falsely claimed she had never been asked by Russian officials to coordinate any meetings between U.S. business leaders or politicians and officials from the government of Moscow.

The complaint said the FBI during its probe used search warrants to access eight of Branson's electronic accounts and 34 electronic devices, including about 11 cellular phones. It said she flew to Moscow less than a month after her FBI interview, and sold her New York City residence last March.

In a Jan. 30, 2012 email, Branson wrote that she was sending a letter to Putin asking him to provide administrative support so she could host events at the Russian Consulate in New York and the Russian Embassy in Washington, the complaint said.

According to the complaint, Branson emailed an individual in April 2012 who was working in the New York City mayor's office to thank him for helping her obtain "statistical data" to assist her in opening the Russian Center New York.

The complaint said she received about $173,000 between August 2013 and November 22, 2019, from Russian government-controlled entities in connection with her work at the center.

In October, Branson told a Russian government-controlled television station that she had left the U.S. because she thought it was likely that she would be arrested.