NEW YORK - Federal agents have arrested the son of a New York judge on charges that he was among the protesters who stormed the U.S. Capitol, the FBI said on Tuesday.

Aaron Mostofsky, 34, was picked up at his brother's home in Brooklyn on Tuesday morning, about a week after he was seen inside the Capitol wearing a fur costume and a police vest.

He was to make a remote court appearance later in the day to face charges including theft of government property.

Mostofsky's unique garb made him stand out from the crowd of camouflage-wearing, flag-waving marauders. At one point, he was photographed sitting on a bench near the Senate chamber holding a stick and a police riot shield he said he picked up off the floor.

He also gave a video interview inside the building, telling the New York Post he was there "to express my opinion as a free American that this election was stolen."

Mostofsky's father, Brooklyn Judge Steven Mostofsky, has not commented on his son's involvement in the mayhem in Washington.

Messages seeking comment were left for Aaron Mostofsky's brother, Nachman. He is the executive director of Chovevei Zion, The Jewish Heritage Preservation Society, and vice president of the South Brooklyn Conservative Club.

Nachman Mostofsky told Gothamist last week that his brother "did nothing illegal," "was not part of the riot" and was only in the Capitol because he was "pushed inside." 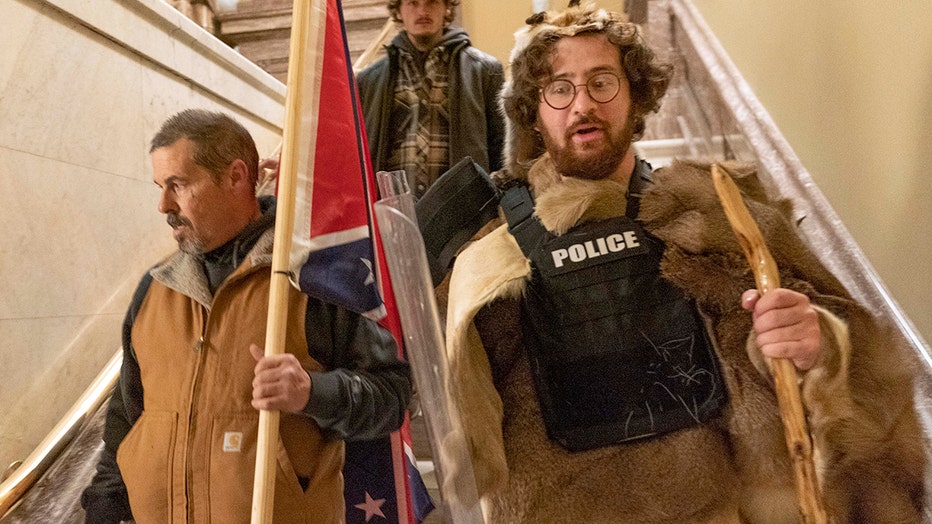 In this Jan. 6, 2021 file photo, supporters of President Donald Trump, including Aaron Mostofsky, right, who is identified in his arrest warrant, walk down the stairs outside the Senate Chamber in the U.S. Capitol, in Washington. (AP Photo/Manuel Bal