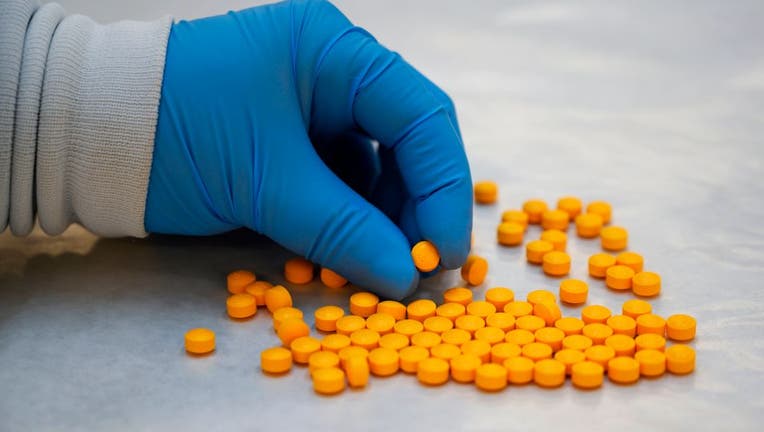 MEXICO CITY - Soldiers and police in Mexico seized an industrial-scale meth and fentanyl lab that was so big it startled investigators, federal prosecutors announced Sunday.

The lab had chemical preparation vats about two stories tall that could process 11,000 pounds (5,000 kilograms) of raw material at a time, said Felipe de Jesus Gallo of the federal Attorney General’s Office.

“In the Attorney General's Office, we have no record of any seizure of equipment of this size before,” Gallo said.

The mega-lab was uncovered this past week in a storefront advertising industrial cleaning products on the outskirts of Mexico City.

Behind the storefront was a warehouse, with tall stacks of drums and 265-gallon (1,000 liter) tanks holding precursor chemicals, which Gallo said could be used to produce methamphetamines and the synthetic opioid fentanyl.

Code-named “Blue,” the coordinated series of raids also hit other properties in the northern state of Durango, Mexico City and the surrounding State of Mexico.

At one property in Mexico City, authorities arrested an engineer who allegedly built and ran labs for an organized crime group. A drum of what appeared to be a precursor of fentanyl was found as well as written instructions on how to process it.

More than 200 pounds of meth seized at California-Mexico border

A 65-year-old woman and her 19-year-old granddaughter were arrested at the California-Mexico border on suspicion of trying to get a vehicle containing more than 200 pounds of meth through the border.

Authorities also found 290 kilograms of meth “with a high level of purity” at a lab raided in the northern state of Sonora. Gallo said some of the drugs were destined for the United States.

Tying together the raids was evidence that the whole operation was being run by people tied to a group in Sinaloa, home to the drug cartel of the same name.

Mexican marines said they had gathered intelligence indicating fentanyl precursors were being imported from China via a company in Hong Kong. Marines traced a shipment of containers that moved through a Japanese port to the Baja California seaport of Ensenada. The marines said they had found an undisclosed amount of three precursor chemicals in the containers that could be converted into fentanyl through “a simple process.”