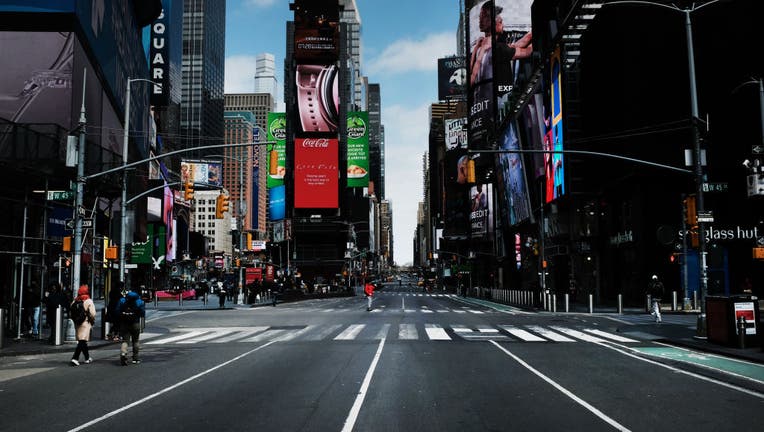 Times Square stands mostly empty as as much of the city is void of cars and pedestrians over fears of spreading the coronavirus on March 22, 2020 in New York City. (Photo by Spencer Platt/Getty Images)

NEW YORK (AP) — How did the coronavirus outbreak get so bad in New York?

It's likely a combination of its size, how crowded it is, its international popularity and other factors.

New York accounted for roughly half the U.S. cases, as of Wednesday. Federal officials say the rate of people being sickened is four to five times greater in New York than other parts of the country.

“We have 10 times the problem that the next state has” when counting numbers of cases, said New York Gov. Andrew Cuomo, during a press briefing on Wednesday.

"It really is breathtaking, when you think about it," he added.

Scientists expect the number of new infections, hospitalizations and deaths in the New York area to increase over the coming weeks. But they also believe that social distancing and staying inside are slowing the spread. It just may take time to see, because it can take days for an infected person to develop symptoms.

It's a bit like in astronomy, “when the light you are seeing from a star is in the past,” said Troy Tassier, an economist at Fordham University.

Public health experts pointed to the size and density of the nation’s biggest city as a likely factor in its coronavirus caseload. Cuomo noted New York draws travelers from around the globe, including areas where outbreaks erupted earlier, like China and Italy.

“I have no doubt that the virus was here much earlier than it was in any other state, because those people come here first,” he said. (If that's true, no one realized it: The first reported case in the U.S. was in Washington state, weeks before New York's.)

Some also noted the state’s big push to test people – more than 12,000 on Monday alone, according to figures the governor’s office released Wednesday.

Dr. Deborah Birx, who is coordinating the federal coronavirus response, on Tuesday suggested: “Part of it is the spread that may have happened on metal surfaces, like in the subway and people that were in the subway."

Whatever the reason, the size of the problem in New York is staggering.

If it were its own country, New York state would rank fifth in the number of cases, after China, Italy, Spain and Germany and about tied with the rest of the U.S.

Aubree Gordon, an associate professor at University of Michigan’s school of public health, said restrictions on residents will work, eventually. “From the time that a measure is put into place, it will take at least a few weeks before we see an impact in the number of new daily cases,” Gordon said.

But Gordon suggested New York would have made a bigger dent if it had acted earlier.

He alluded to conflicting messages by different federal leaders about how serious a threat the virus posed, not to mention other problems like delays in virus testing. That left localities to take action, “and unfortunately, that was on the late side and undercut” by federal messages, Strom said.

It can be difficult to motivate government leaders and the public to take big steps against a disease before the problem hits threatening levels, said Dr. Mark Dworkin, who teaches about outbreak investigations at the University of Illinois at Chicago.