BRUSSELS - The European Union's executive body proposed Wednesday issuing certificates that would allow EU residents to travel freely across the 27-nation bloc by the summer as long as they have been vaccinated, tested negative for COVID-19 or recovered from the disease.

With summer looming and tourism-reliant countries anxiously waiting for the return of visitors amid the coronavirus pandemic, the European Commission foresees the creation of certificates aimed at facilitating travel between EU member nations. The plan is set to be discussed during a summit of EU leaders next week,

"We all want the tourist season to start. We can’t afford to lose another season," European Commission Vice President Vera Jourova told Czech public radio. "Tourism, and also culture and other sectors that are dependent on tourism, terribly suffer. We’re talking about tens of millions of jobs." 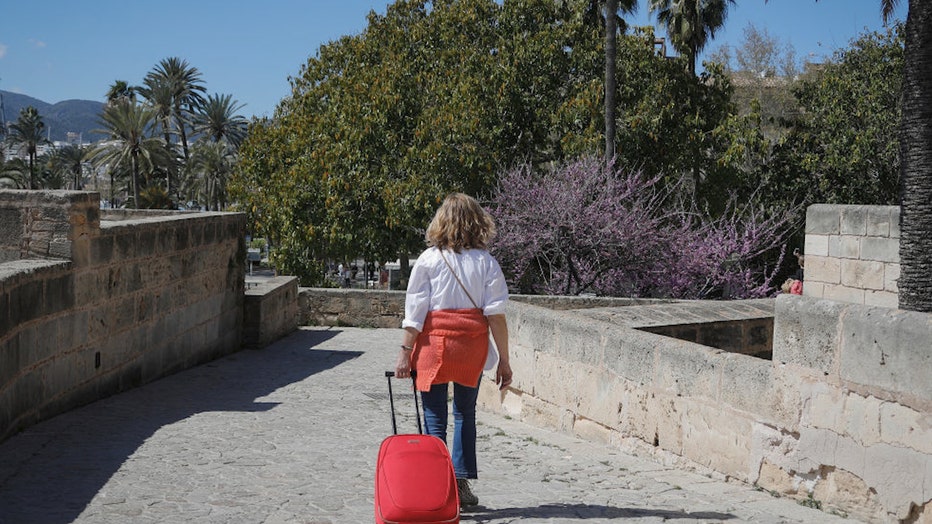 FILE - 17 March 2021, Spain, Palma: A woman with luggage walks through a city street. Airlines are planning more flights from Germany to Mallorca for the Easter holidays due to strong demand.

The topic of vaccine certificates has been under discussion for weeks in the EU, where it proved to be divisive. The travel industry and southern European countries with tourism-dependent economies like Greece and Spain have pushed for the quick introduction of a program that would help eliminate quarantines and testing requirements for tourists.

But several other EU members, including France, argued that it would be premature and discriminatory to introduce such passes since a large majority of EU citizens haven't had access to vaccines so far.

To secure the participation of all member countries, the commission proposed delivering free "Digital Green Certificates" to EU residents who can prove they have been vaccinated against COVID-19, but also to those who have tested negative for the virus or can prove they recovered from it.

RELATED: WHO to release report next week on origins of COVID-19

"Being vaccinated will not be a precondition to travel," the European Commission said. "All EU citizens have a fundamental right to free movement in the EU, and this applies regardless of whether they are vaccinated or not. The Digital Green Certificate will make it easier to exercise that right, also through testing and recovery certificates."

According to data compiled by the European Centre for Disease Prevention and Control, less than 5% of European citizens have been fully vaccinated amid delays in the delivery and production of vaccines. The European Commission says it remains confident that it can achieve its goal of having 70% of the EU’s adult population vaccinated by the end of the summer.

Greek Prime Minister Kyriakos Mitsotakis said the travel certificates "will help boost tourism and the economies that rely heavily on it." Europe’s aviation industry urged EU governments to ensure the passes are operational in time for the peak of the summer travel season.

RELATED: US travel on the rise as COVID-19 vaccinations ramp up, but medical experts warn pandemic isn’t over

The commission proposed that all vaccines rubberstamped by the European Medicines Agency should be automatically recognized, but also offered governments the possibility to include other vaccines like Russia’s Sputnik or China’s Sinovac, which haven't received EU market authorization.

The European Commission guaranteed that "a very high level of data protection will be ensured" and said the certificates will be issued in digital format to be shown either on smartphones or paper.

EU officials also hope that vaccine certificates will convince the member states which have introduced travel restrictions aimed at slowing down the pace of new infections to lift their measures. The EU’s executive arm has previously warned six countries that their travel-limiting measures, which in Belgium go as far as a ban on nonessential trips, could undermine the core EU principle of free travel and damage the single market.

The commission said the certificates should be suspended once the World Health Organization declares the end of the COVID-19 pandemic.

If agreed by the EU leaders, the proposal will need to be approved by EU lawmakers to enter into force.

Karel Janicek in Prague contributed to this story.