Dialysis patient Brian Pinker, 82, was the first to get the new vaccine shot, administered by the chief nurse at Oxford University Hospital. (Credit: OUH via Storyful)

The head of the European Medicines Agency said Wednesday that there is "no evidence" that would support restricting the use of AstraZeneca’s coronavirus vaccine in any population, as Germany has now done amid concerns over rare blood clots in people who got the shot.

But EMA Executive Director Emer Cooke said her Amsterdam-based agency continues to study reports of new cases as they come in and will provide a further assessment next week.

On Tuesday, an independent vaccine expert panel in Germany said AstraZeneca shots should not routinely be given to people under 60 because of a rise in reported cases of unusual blood clots in the days after vaccination.

The German government followed the recommendation and said the British-Swedish company's vaccine would be prioritized for people age 60 and older, although exceptions can be made in consultation with doctors. 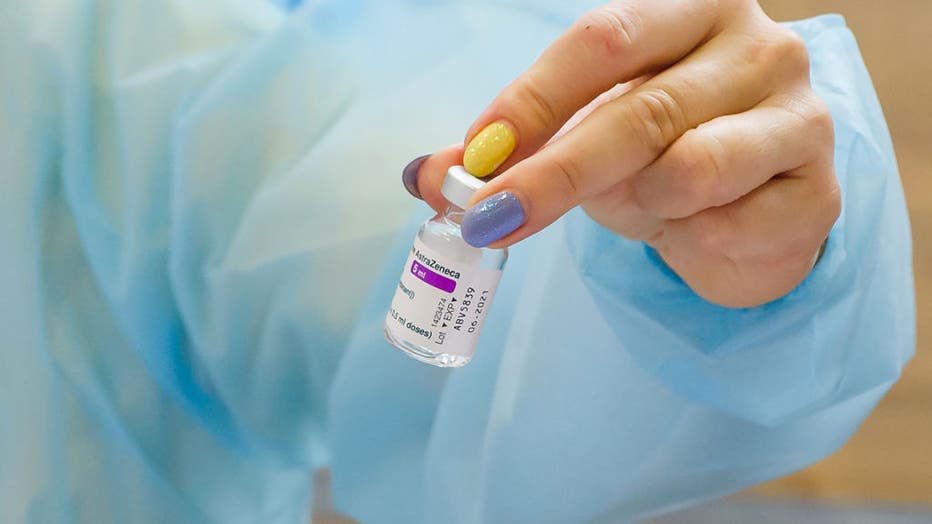 A medical worker holds a vial of the AstraZeneca vaccine against the COVID-19 in Ventspils, Latvia, on March 30, 2021. (Photo by GINTS IVUSKANS/AFP via Getty Images)

The move put the spotlight back on the European Medicines Agency, which authorized the AstraZeneca vaccine in January and said earlier this month — after some European countries suspended its use over blood clot fears — that the vaccine's benefits outweigh the risks.

"According to the current scientific knowledge, there is no evidence that would support restricting the use of this vaccine in any population," Cooke told reporters.

RELATED: AstraZeneca vaccine use again suspended for people under 60 in parts of Germany

She said the agency's assessment was based on 62 cases worldwide of unusual blood clots, including 14 deaths, reported to EMA by March 22. Those figures included a "significant" number of the cases reported from Germany, but not all, she said.

German regulators said they had received 31 reports of rare blood clots in the head in recipients of the AstraZeneca vaccine and nine deaths up to March 29, roughly doubling the number that had been reported in the country by March 22.

Cooke said the EMA will include the Germany cases in its review "and they will form part of the ongoing evaluation that the committee is undertaking, as will any additional cases that are reported from other countries and regions."

Based on the numbers reported to the agency so far, there have been 4.8 cases of the rare blood clots per million doses of the AstraZeneca vaccine administered, she said.

"For the BioNTech vaccine, based on the same criteria, it was 0.2 cases per million," Cooke added, referring to the shot a German biotechnology company developed with U.S. pharmaceutical giant Pfizer. "And for the Moderna vaccine based on the same criteria, zero cases per million. But that probably reflects that there’s a lot less use of Moderna at the moment in Europe."

She said the EMA's experts so far had not determined any underlying risk factors for the blood clots or established a causal relationship to the AstraZeneca vaccine.

"The link is possible, and we cannot say any more than that at this point," Cooke said.

Among those affected by Germany's decision to halt the AstraZeneca vaccine's use in under 60-year-olds were tens of thousands of teachers, who had only recently been offered appointments for the shot.

The head of the German Teachers' Association, Heinz-Peter Meidinger, described the decision as a "catastrophic setback" and called for school staff to be offered another type of vaccine instead.

RELATED: Canada suspends use of AstraZeneca COVID-19 vaccine for people under 55