The Oregon Zoo’s elephant herd partook in the annual "Squishing of the Squash" on Oct. 14, 2021, reducing giant pumpkins into pulps.

PORTLAND, Ore. - A herd of elephants got to smash massive pumpkins this week at the Oregon Zoo, a fall activity held each year to usher in Halloween.

The Oregon Zoo’s 23rd annual "Squishing of the Squash" event was held Thursday in which some of the world’s largest land animals pulverized the area’s largest pumpkins.

The zoo said physical distancing and restrictions on large gatherings due to the coronavirus pandemic meant the event couldn’t be held in public this year, but that didn’t stop the giant animals from having some fun. Video shared by the zoo shows its Asian elephant family stomping and chomping on the pumpkins before the zoo opened.

"Everything looks a little different for us this year, but the elephants didn’t seem to mind," senior keeper Dimas Dominguez said in a statement. "They got one 650-pound pumpkin and a couple more pretty big ones to play with. First, they destroy them, then they enjoy them."

The Squishing of the Squash tradition dates back to 1999 when the local Hoffman’s Dairy Garden of Canby dropped off a prize-winning 828-pound pumpkin for the elephant family.

"In those days, local farmers often donated overstock pumpkins for use in the zoo’s groundbreaking animal enrichment efforts — improving animals’ well-being by providing stimulating and challenging environments, objects and activities," the zoo explained. 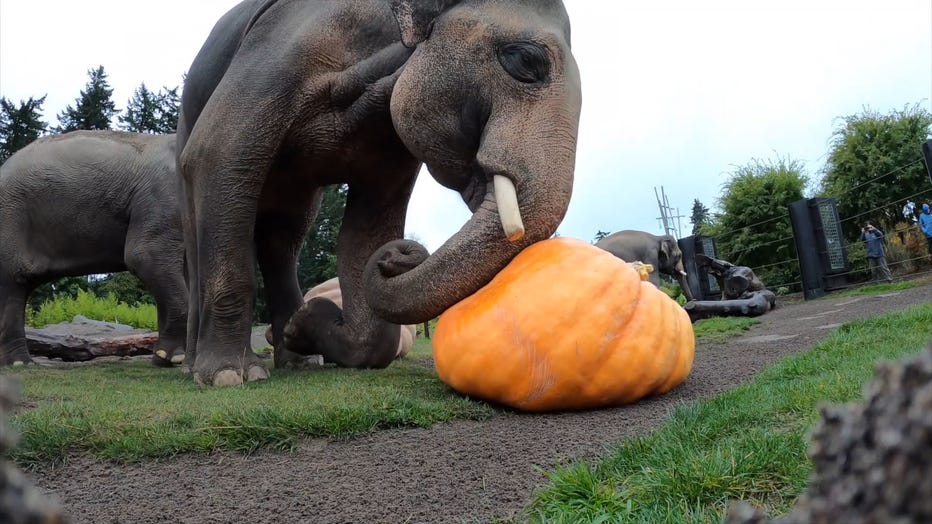 A screengrab from the video shows an elephant about to smash a giant pumpkin at the Oregon Zoo on Oct. 14, 2021, in Portland, Oregon. (Credit: Oregon Zoo via Storyful)

The Oregon Zoo, located in Portland’s Washington Park, has maintained an Asian elephant program for more than 60 years. They are considered an endangered species by the World Wildlife Fund, which estimates that fewer than 50,000 remain, and are threatened by habitat loss, conflict with humans and disease.

These "extremely social" animals can range anywhere between 6.5 feet to 11.5 feet and weigh around 11,000 pounds, the WWF says. They inhabit dry to wet forest and grassland habitats in 13 different countries spanning across Asia.

RELATED: Mother goes all out on Halloween decorations for homebound son