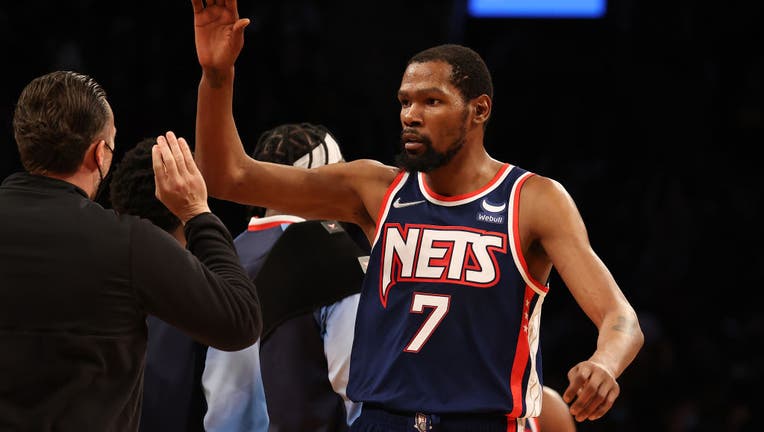 Kevin Durant #7 of the Brooklyn Nets celebrates a 114-105 win against the Philadelphia 76ers during their game at Barclays Center on December 16, 2021 in New York City. (Photo by Al Bello/Getty Images)

Kyrie Irving's return to the Brooklyn Nets is starting with a trip to the NBA's health and safety protocols — and Kevin Durant is joining him.

The Nets' outbreak worsened Saturday when they announced both stars were in protocols, giving them a league-high nine players on the injury report for that reason.

Durant already was scheduled for a night off to rest Saturday against Orlando on the opening night of a back-to-back. Instead, he became ineligible to play anyway when he was added to the injury report.

The Nets decided Friday that Irving would rejoin them for practices and road games, though he remains ineligible to play at home because he hasn't met New York City's COVID-19 vaccine mandate for athletes playing in the city's public venues. He has to test to be cleared to play and apparently he either tested positive or had an inconclusive result.

James Harden, LaMarcus Aldridge, DeAndre' Bembry, Bruce Brown, Jevon Carter, Paul Millsap and James Johnson all are listed as out because of the protocols.

Needing to have eight players to start a game, the Nets scrapped their plan to rest Patty Mills and said he would be available. They also signed swingman James Ennis III and guard Shaquille Harrison to 10-day contracts.

Chicago previously had 10 players in health and safety protocols, causing two of their games this week to be postponed. Three of them were cleared as of Friday, putting the Bulls on track to resume Sunday against the Lakers.

Mobley has been a major reason for Cleveland's unexpected and surprising start this season. The No. 3 overall draft pick has been as good as advertised while helping the Cavs go 18-12 and surge into fourth spot in the Eastern Conference standings.

Mobley missed four games earlier this season with an elbow sprain, and the Cavaliers lost them all. Mobley also sat out Cleveland's 35-point win over Houston on Wednesday with a hip injury not believed to be serious.

Cleveland, which won just 22 games last season, is riding a five-game winning streak heading into Saturday's game at Milwaukee. The Bucks will be without superstar Giannis Antetokounmpo, who was placed in health protocols earlier this week.

Cavaliers swingman Isaac Okoro was also placed in protocols on Thursday, and the coronavirus has sidelined several other prominent players across the NBA.

The 7-foot Mobley is averaging 13.8 points, 8.3 rebounds, 2.5 assists and 1.8 blocks. The former USC standout was named the league's top rookie for October and November.