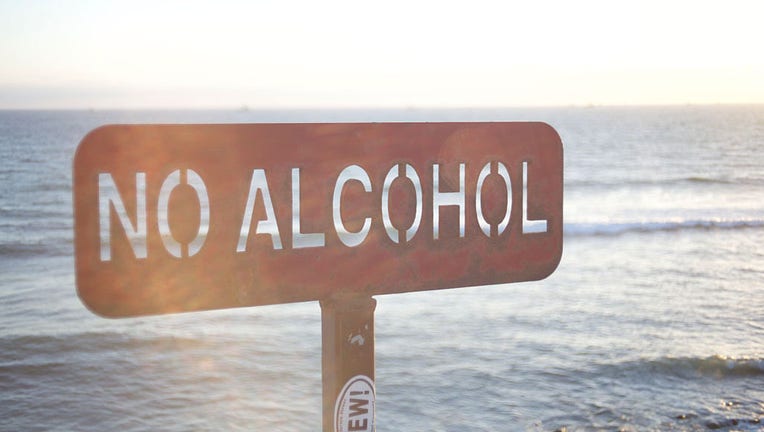 FILE - A metal "No Alcohol" sign at the Pacific Ocean near Malibu, California (Photo by Michael Hurcomb/Corbis via Getty Images)

"Dry January," as the name implies, involves avoiding alcohol for 31 days during the month of January.

The movement is part of a public health campaign that people have been practicing across America as well as in European countries.

"I’ve been doing it for years. It is a great chance to hit the reset button after so many holiday parties from Thanksgiving and Christmas through New Year’s Eve," John Hayes, a financial broker in Atlanta, Georgia, told Fox News Digital.

"Feels like a million bucks. Big advocate," he added.

Alcohol-related deaths have doubled in US, study finds

The study looked at death certificate data between 1999 and 2017 and found an increase in alcohol-related deaths, especially among women.

Mike P. (who asked that his last name not be used) from Long Island, New York, told Fox News Digital that he took part in "Dry January" last year.

"I fell into a pattern of having some drinks each night and thought it was a great way to sort of break that habit."

The 51-year-old said he felt some very specific benefits from leaving the booze behind for a month.

"I slept better. It was a good reset," he said.

DRINKING MAY SHRINK THE BRAIN, EVEN IN MODERATE AMOUNTS, STUDIES SAY

Participating in "Dry January" has been associated with an increased sense of well-being and general self-efficacy, according to a study that surveyed more than 4,000 participants.

It was published in the journal Psychology & Health in 2020.

Research shows that a month off alcohol leads to lower blood pressure, cholesterol and diabetes risk, as well as lower cancer-related proteins in the blood.

There is "growing evidence that support provided through organized abstinence challenges is associated with changes in beliefs linked to harmful drinking," the researchers said in the study.

"However, there is a need for further research to help us to understand what forms of support are most effective for different drinkers."

The group Alcohol Change UK is an association behind the "Dry January" campaign and provides an app as well as several tools to help support those who undergo the New Year’s challenge.

The group's mission is to reduce harm associated with drinking, its website stated.

Research shows that a month without alcohol leads to lower blood pressure, cholesterol and diabetes risk, as well as lower cancer-related proteins in the blood. 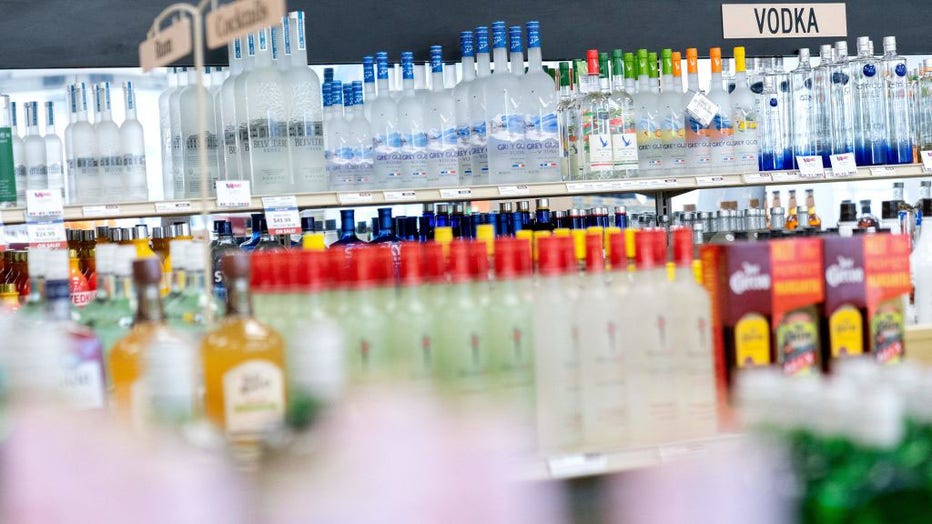 FILE - A sign for Vodka is displayed behind various bottles of alcohol at a Virginia Alcoholic Beverage Control Authority store in Arlington, Virginia, on Feb. 28, 2022. (Photo by STEFANI REYNOLDS/AFP via Getty Images)

"This can create a reset or opportunity to reestablish a healthier relationship with drinking."

Albin told Fox News Digital that "Dry January," or even "Dry October," which was recently popular, can be a good idea for many people.

"It helps create a behavioral, mental and physical boundary between them and alcohol. This can create a reset or opportunity to re-establish a healthier relationship with drinking," said Albin, who is the author of books such as "The Idiots' Guide to Cognitive Behavior Therapy" and "Virtual Reality & Biofeedback for Fear of Flying Phobia."

Albin warned, however, that "one downside of planning on a ‘Dry January’ is that people tend to booze more during December in anticipation of a dry month."

She added, "That is something you want to be careful not to do. If you’re planning on having a ‘Dry January,' think about slowly tapering off drinks during the big party month of December to prepare and get the most benefits."

Excessive alcohol use over time has been associated with many chronic health conditions.

These include heart disease, liver disease and some forms of cancer, as well as memory problems and digestive issues, according to the Centers for Disease Control and Prevention (CDC).

HDL OR ‘GOOD' CHOLESTEROL MIGHT NOT MAKE A DIFFERENCE TO HEART HEALTH, STUDY SUGGESTS

Elizabeth Byrnes, a trainer in Austin, Texas, told Fox News Digital that "Dry January" is about more than just not drinking.

"'Dry January’ to me is getting rid of toxic everything — food, drinks, excess socializing — and getting in good food, good exercise and more quality self-care."

"I am doing ‘Dry January’ this year, but ‘dry’ for me means more than just eliminating alcohol — it’s a month when people don’t expect you to be super social," she said.

"Therefore, it's a month that you can easily focus on yourself before the spring complicates self-care."

Byrnes added, "So, ‘Dry January’ to me is getting rid of toxic everything — food, drinks, excess socializing — and getting in good food, good exercise and more quality self-care."

Christine MacInnis, a licensed marriage and family counselor in Torrance, California, agreed with Byrnes and said that "Dry January" is an opportunity to evaluate not just drinking but all habits that do not serve people well, she told Fox News Digital in an interview.

MacInnis also noted that society has made alcohol the focus of many social occasions — and that does not have to be the case.

"We don’t have to make it the center point of the event," MacInnis told Fox News Digital.

She also noted that one does not have to wait until "Dry January" to put down that drink.

APP FOR BIRD LOVERS GETS PEOPLE OUT INTO NATURE WHILE HELPING BIRD, WILDLIFE CONSERVATION

"This January first is a special day, but you can do this any day you choose," she said.

The therapist offered several tips for successfully completing a "Dry January." She recommended taking on the challenge with a friend or group of friends.

MacInnis also suggested looking for other types of coping mechanisms after a stressful day, such as taking a long walk with a dog, creating a gentle stretching routine, or doing yoga or meditation — rather than reaching for a glass of wine. 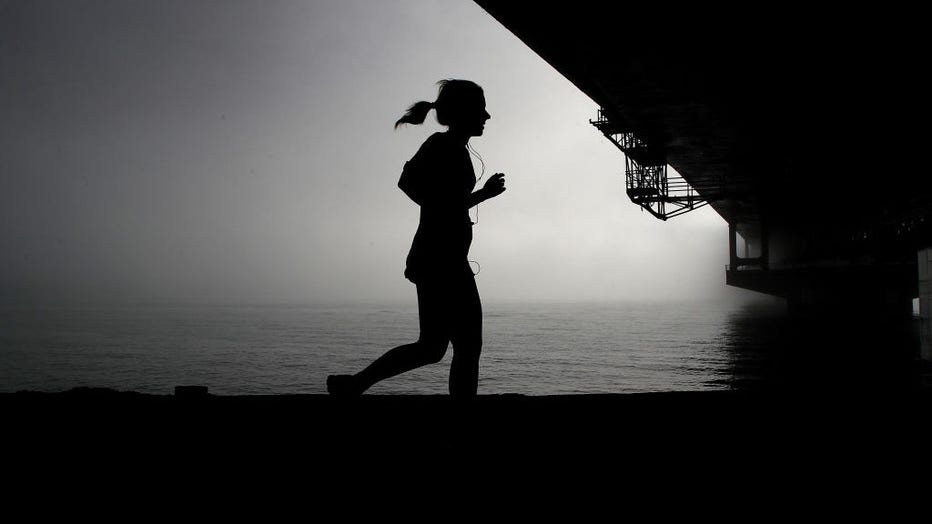 FILE - A morning jogger runs underneath Auckland Harbour Bridge as fog drifts over the harbor on Aug. 2, 2018, in Auckland, New Zealand. (Photo by Phil Walter/Getty Images)

If you do attempt the full 31-day challenge and fall short, the therapist said, "Be kind to yourself."

Instead of engaging in self-shame, look at it as another chance to start over the next day, she said.

For those who struggle with addiction or think they have a problem with alcohol, therapy can help address the issue, she also said.

A medical professional can help guide people through the process to help avoid alcohol-withdrawal complications.

Alcohol Change UK said that although they see the benefits of "Dry January," it can be dangerous if a person is dependent on alcohol and stops abruptly — resulting in withdrawal symptoms.

"Stopping drinking suddenly can be very dangerous, and can even kill you, if you are dependent on alcohol," the group warned on its site.

The group said that if an individual experiences symptoms after a period of drinking that include seizures, hand tremors, hallucinations, depression, anxiety, difficulty sleeping or sweating, they may be dependent on alcohol and should not suddenly stop drinking completely.

They should consult a healthcare professional for advice and information.

A medical professional can help guide people through the process to help avoid alcohol-withdrawal complications.