Fears about COVID and the economy

NEW YORK - Fears of the spreading delta variant of the coronavirus prompted a slide in stocks from Wall Street to Tokyo on Monday. Airlines, hotels, cruise ships, and other tourism-based companies had some of the biggest stock losses.

The Dow Jones Industrial Average was down more than 900 points for part of the day and then recovered to close down nearly 726 points, or -2.1%. The S&P lost 1.6% and the Nasdaq Composite Index shed 1.1%.

"The stock market tends to overreact to bad news like the rise in the delta variant," Oxford Economics senior economist Barbara Byrne Denham said. "That's what we are seeing today."

COVID-19 cases are climbing in all 50 states with the more contagious delta variant being the most common strain of the virus.

President Joe Biden addressed the nation on Monday amid the possibility of an economic slowdown. He tried to reassure Americans by saying the economy is making a robust rebound under his leadership. But he said a full recovery hinges on a majority of Americans getting vaccinated.

Consumer prices in the country last month saw the largest inflation spike since 2008, evidence that a swift rebound in spending has run up against widespread supply shortages.

"As our economy has come roaring back, we see some price increases. Some folks have raised worries this could be a sign of persistent inflation but that's not our view," Biden said. "The data shows most of the price increases were expected and expected to be temporary." 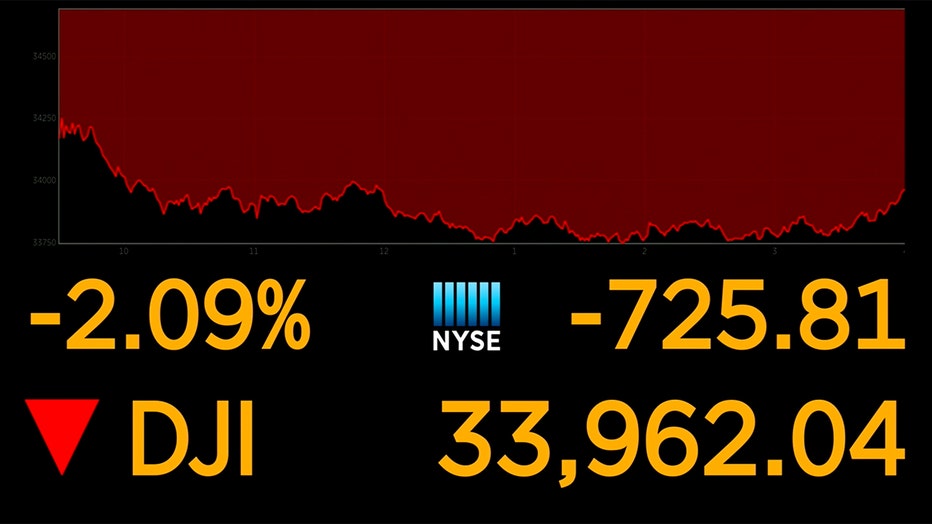 Market watchers had been warning that stock valuations were getting stretched with indexes hitting record highs as recently as last week.

The president is also making the case for trillions of dollars in new spending.

"If we increase the availability of quality, affordable child care, elder care, paid leave, more people will enter the workforce," Biden said. "These steps will enhance our productivity, raising wages without raising prices."

Democrats are working on a $3.5 trillion budget blueprint to pump federal resources into health care and family service programs.

Senate Majority Leader Chuck Schumer, D-New York, is also setting a Wednesday deadline for a procedural vote to begin debate on the $1.2 trillion bipartisan infrastructure bill, a move some Republicans have criticized.

The DOW Jones fell more than 800 points over fears of the Delta variant.

The more contagious delta variant of COVID-19 has become the dominant strain of COVID-19 in New York City and across the nation.