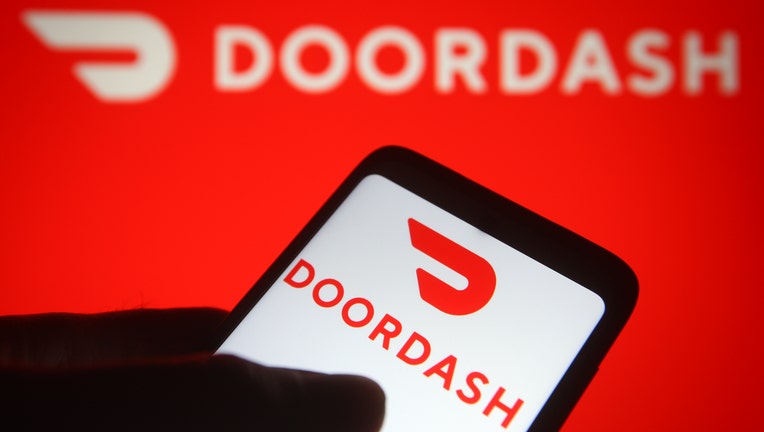 In this photo illustration the DoorDash logo of an US online food ordering company is seen on a smartphone and a pc screen. (Photo Illustration by Pavlo Gonchar/SOPA Images/LightRocket via Getty Images)

The lawsuit, filed Wednesday, is the latest in a string of legal tussles between the delivery companies and local governments, reflecting unease over the phenomenal growth of delivery and its impact on restaurants. Last week, DoorDash, Grubhub and Uber Eats sued New York over a separate bill that caps the fees delivery companies can charge to restaurants. DoorDash and Grubhub are also suing San Francisco over fee caps adopted there.

In its new lawsuit, DoorDash says an ordinance passed by the New York City Council in late July is unconstitutional and violates customer privacy. Under the law, delivery companies must share data collected on customers __ including names, addresses, phone numbers and order contents __ to any restaurant that requests that information. Customers can opt out and keep their information private, but only on an order-by-order basis.

"In an era of heightened concerns about data privacy and identity theft, this compelled disclosure is a shocking and invasive intrusion of consumers’ privacy," the San Francisco company said in its court filing. The company pointed out that in-person diners would never be asked to share the same information with restaurants.

But many restaurants __ fed up with delivery fees and lack of transparency __ supported the bill. The NYC Hospitality Alliance, which represents bars and restaurants in New York, says the bill reduces the leverage delivery companies have over restaurants, because it ensures they won’t lose access to their customers if they decide to leave a delivery platform. It also gives them a chance to market directly to customers.

Delivery companies saw big sales gains over the last year as pandemic lockdowns closed restaurant dining rooms and more people ate at home. DoorDash booked a record 345 million orders in its most recent quarter, and its sales jumped 83% from the prior year to $1.24 billion.

Delivery companies say they help restaurants by connecting them to diners and handling tricky logistics. But their commission fees, which can be as high as 30% per order, have cut into the already thin margins of restaurant owners in an unprecedented era. The National Restaurant Association estimates 90,000 U.S. restaurants have closed permanently or long-term because of the pandemic.

That relationship between delivery companies got more scrutiny from local lawmakers as the pandemic wore on. Dozens of cities passed temporary fee caps. In July, Massachusetts sued Grubhub, claiming it charged restaurants illegally high fees during the pandemic. And last month, Chicago sued DoorDash and Grubhub, accusing them of deceptive business practices, including delivering from restaurants without their consent. Both companies denied those claims.