Thousands of firefighters and emergency medical personnel responded to Ground Zero, including more than 300 specialized canine search and rescue teams.

As America marks the 20th anniversary of the worst terror attack on United States soil, many remembered the countless lives lost and selfless acts by the brave responders on Sept. 11, 2001 — both human and canine.

Nearly 3,000 people were killed when terrorist-piloted planes slammed into the World Trade Center, the Pentagon and a field in Pennsylvania.

Thousands of firefighters and emergency medical personnel responded to Ground Zero, including more than 300 specialized canine search and rescue teams in the days following. But according to the American Kennel Club, only about 100 were prepared for the size of the disaster.

Bretagne was 2 when she and her handler, Denise Corliss, were part of the Texas Task Force 1 sent to the World Trade Center site in Lower Manhattan, according to Fox News. They spent 10 days at the scene searching rubble for human remains. She died in 2016 at age 16. 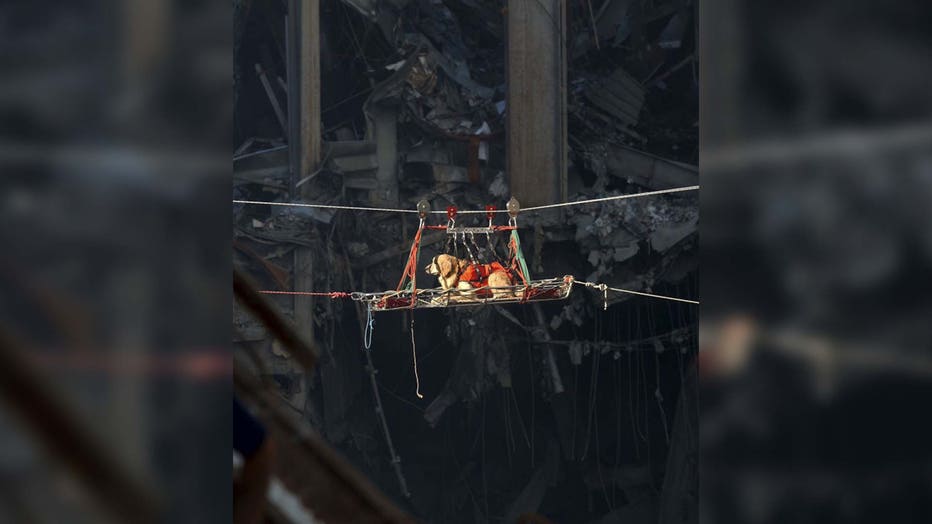 FILE - A rescue dog is transported out of the debris of the World Trade Center Sept. 15, 2001 days after the Sept. 11, 2001 terrorist attack. (Jim Watson/Getty Images)

Another dog, Riley, was the subject of an iconic K-9 photo from the September 11th attacks. The Golden Retriever was formally trained to locate survivors of the attacks, searching Ground Zero through the nights following as part of FEMA’s Pennsylvania Task Force 1, according to the American Kennel Club. The picture of Riley captured the hearts of people around the world and moved many to action.

Riley passed away in 2010 when he was 13. He "helped inspire a study of the long-term effects this type of rigorous search and rescue work can have on canine health," according to the AKC.

Apollo, a German Shepherd who worked with the first NYPD K-9 Urban Search and Rescue team, responded with his handler, Peter Davis. They were the first K-9 search and rescue team to respond to the site, arriving at the South Tower just 15 minutes after its collapse. Apollo looked for survivors for 18 hours a day for weeks, according to the American Kennel Club. 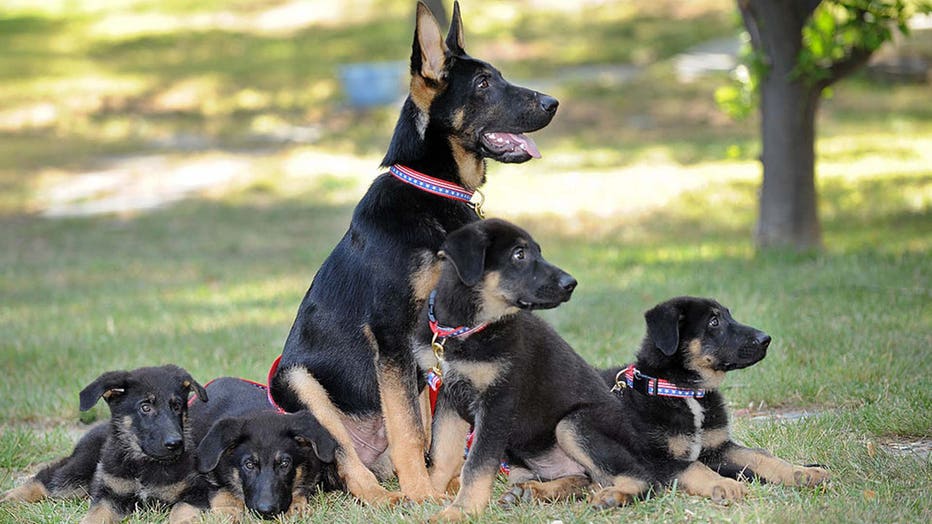 FILE - Trustt, Solace, Prodigy, Valor and Dejavu are pictured during a press conference, on June 17, 2009. (GABRIEL BOUYS/AFP via Getty Images)

Trakr was a German Shepherd who responded with his Canadian police officer handler, James Symington. The team is credited with finding the last remaining survivor from the World Trade Center after she had been trapped for hours. Two days after arriving and searching for survivors, the dog collapsed from smoke inhalation, exhaustion and burns and was treated before returning to Canada, according to TIME. Trakr was awarded the sixth spot on TIME’s published list of Top 10 Heroic Animals.

Symington entered Trakr’s DNA into a BioArts International contest where he won, according to the AKC. Trakr’s DNA was used to create five clones before he passed away in 2009 at the age of 14.

"The Trakr puppy clones (Trustt, Solace, Valor, Prodigy, and Deja Vu) are continuing Trakr’s legacy and all started their training as search and rescue dogs in 2011," the AKC said.

A yellow lab named Sirius was the only known K-9 to die in the attacks. Sirius was in the basement below the World Trade Center’s South Tower with his handler, Port Authority Police Department Lt. David Lim, when they felt the building "violently tremble," according to the 9/11 Memorial and Museum. Lim secured Sirius in his kennel and went to assist the injured, telling his partner, "I'll be back for you." Sirius' remains were later recovered in the winter of 2002 in the wreckage of the South Tower and ceremoniously removed from Ground Zero with a full honor guard. 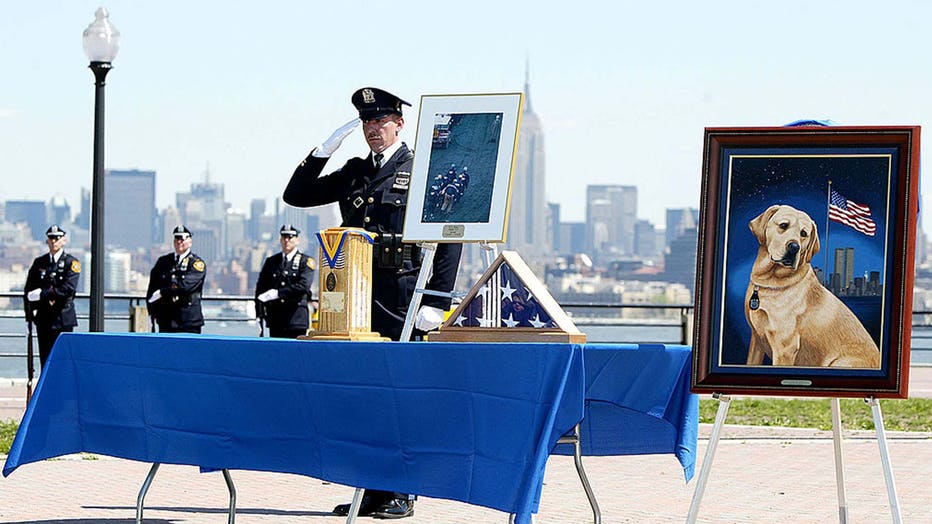 FILE - A NY-NJ Port Authority Police Officer salutes near a painting of Sirius, a K9 dog killed during the terrorist attack at the World Trade Center, during a memorial service at Liberty State Park April 24, 2002 in Jersey City, NJ. (Don Murray/Getty Images)

Countless other dogs worked for days on end after the attack to help find remains.

Worf, a German Shepherd with a gentle soul, found the remains of two firefighters on his first day and had to be immediately retired. He stopped eating and was so affected that he shut down. His handler Mike Owens said, "He kind of withdrew from everything. There was so much death there, it was emotional for the dogs."

The smallest dog working search and rescue at Ground Zero was Ricky, a Rat Terrier who stood at just 17 inches tall. His size allowed him to squeeze into places that other dogs couldn’t, and he searched the ruins for 10 days straight on the night shift with his trainer, Janet Linker of the Seattle Fire Department. He found bodies of several victims, according to The Seattle Times.

Hansen, a Belgian Shepherd Dog, worked on-site for 150 days alongside his handler, Steve Smaldon, then-chief of the Lindenhusrt Fire Department. Hansen found the body of NYPD Officer John William Perry, who had been hours away from retiring when the attacks occurred, but rushed into the chaos to help anyway.

The same day, Hansen also located the body of Sgt. Michael Curtin, a Marine Corps veteran who had been with the NYPD for 13 years. "(Sgt. Curtin’s) complete body was recovered," Smaldon told author Ron Burns.. "Even being able to read his name on his uniform. Curtin had been a Marine before becoming a police officer. He had helped dig out a Marine who was killed in the Oklahoma City bombing. This was a proud day for me and Hansen to bring home two of our own."

"Most people in this country had never heard of disaster search dogs [before 9/11]," Debra Tosch, Executive Director of the National Disaster Search Dog Foundation, told the AKC. She said that "public knowledge really exploded" after news media covered the dogs working at Ground Zero.

Moved by what they saw, many people began donating to programs that trained search and rescue dogs. Some first responders were inspired to found their own training or research programs focused on SAR dogs. General members of the public were inspired to pursue not just search-and-rescue certification for their own dogs but therapy dogs as well.

"When people saw or touched the dogs, they would relax or have a moment's hope," said Dr. Cindy M. Otto, director of the Penn Vet Working Dog Center at the University of Pennsylvania School of Veterinary Medicine, who was a first responder deployed to Ground Zero to treat dogs returning from searches in the rubble. "It was incredible to see the power those dogs had."

According to the AKC, a new era of therapy dogs emerged from the ashes of 9/11, but it was trial by error.

Ursula Kempe, president of Therapy Dogs International, which she co-founded in the mid-1970s, told AKC that while there were dogs at the Family Assistance Center on Pier 94 and 50 at the Pentagon following the attacks, they could not handle the workload.

"While this was still going on, I called a meeting at TDI and asked everyone who was involved if they wanted to come. We all realized—really there was absolutely no dissention—we are not prepared for that, as therapy-dog handlers," Kempe told the AKC.

This realization led to stricter criteria for therapy dogs and their handlers, as well as special certification for dogs to participate in disaster relief, according to the AKC.

"People are realizing all of the different ways we can use these K-9s," Tosch told the AKC. "We’re only limited by our imagination."

This story was reported from Cincinnati and Los Angeles. The Associated Press contributed.