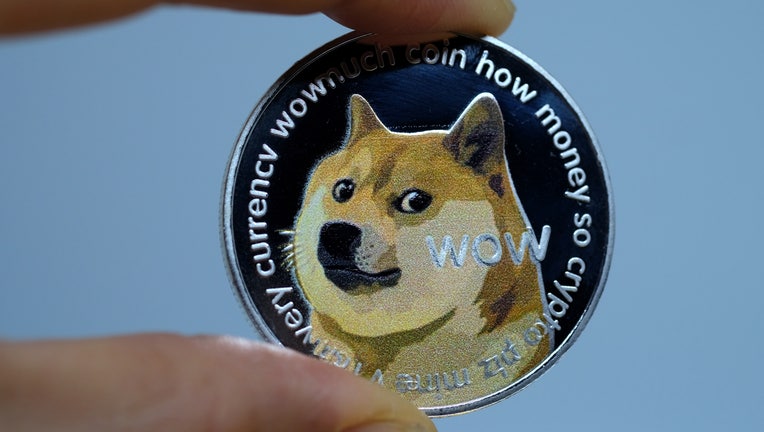 In this photo illustration a visual representation of digital cryptocurrency, Dogecoin is displayed on January 29, 2021 in Katwijk, Netherlands. (Photo by Yuriko Nakao/Getty Images)

The Shiba inu who inspired a famed internet meme and a cryptocurrency is seriously ill, his owner says.

Kabosu’s owner posted on Instagram this week and said the 17-year-old "doge" is suffering from acute cholangiohepatitis and chronic lymphoma leukemia.

"Had blood tests at the hospital today. The doctor called me this evening and told me I was in very dangerous condition," the Instagram post reads. "I didn't expect it to be that bad. Right now, the liver level is very bad and jaundice appears."

But Kabosu is eating and drinking again, and his owner is hopeful that antibiotics will help.

Kabosu became internet famous in 2013, after someone discovered him on a 2010 blog post from his owner. That's when the misspelled "doge" went viral, though reports say "doge" was first used in 2005, when it was mentioned in an episode of Homestar Runner's puppet show.

Social media was swarming with Kabosu’s face and phrases like, "Such funny," and "much wow." "Doge" gained even more notoriety in 2013, when Billy Markus and Jackson Palmer used Kabosu’s image to launch dogecoin. Dogecoin is a cryptocurrency that started as a joke but later became popular thanks to believers like billionaires Elon Musk and Mark Cuban.

Doge has remained relevant through the years, and in 2021, a "Doge" NFT sold for $4 million, the most expensive NFT ever sold.

RELATED: What is an NFT? The digital ‘property’ that is taking the world by storm

Kabosu’s owner said despite his "dangerous state," they’re hopeful he’ll be OK, "because we get our power from all over the world!"